How to Talk to Your Kids About Pot

Our government has long considered pot to be illicit and harmful. It’s been lumped in with other potentially deadly drugs like heroin and ecstasy. And as of this week, it remains on that list. The federal government decided to keep marijuana on its Schedule I status on the Controlled Substances Act, citing insufficient evidence of benefits. It did not find, however, that marijuana is a “gateway drug.”

At the same time, many parents—even ones who hold the highest office in the world—know that many teenagers, eagerly exploring their newfound rights to their bodies and experiences, have also used pot. So what are we supposed to do?

We’re given a wishy-washy, contradictory set of guidelines at best. We’re up against not only teen peer pressure but changing state laws, a burgeoning new industry and introductory studies that may not be enough for the government, but are certainly enough for our savvy teens using the Internet to educate themselves on trending issues important to them.

Given that teenagers are prone to pushing boundaries, taking risks and discovering life lessons for themselves, standing rigid on this issue may win parents points on a procedural and official level, but it may well leave them in the dust in terms of their relationship with their children, the honesty and trust levels between them and what matters most to them in the world.

Speaking as a woman now in her mid-30s, when I was first introduced to weed in the early 2000s, it was absolutely illegal. The line was easy for my parents. Pot was bad. Marijuana was a gateway drug. I didn’t go through five years of Reagan-era DARE programs for nothing, did I? With the law and educational programs in their arsenal, my parents warned me of the lifelong path to addiction in which pot use would result. They expected me to use my reasoning and logic and the skills they painstakingly taught me for self-preservation and success. Then they wiped their hands of it, secure in the knowledge they’d done everything they could. And I went right around them.

The first time I tried the drug was 2001. I was in Hawaii, spending a few months on a coffee farm during summer break. On the side, the farm workers harvested marijuana, keeping the plants hidden from helicopter surveillance in the dense brush and shrubbery around the farm. I knew absolutely nothing about it other than it was the worst. That’s as far as DARE went. So, when I saw a trusted group of my peers smoking it and heralding its positive qualities, I indeed used my logic and reasoning, and determined those programs and scare tactics must be hooey.

Then I inhaled like those kids showed me and nothing happened. So I inhaled more. And then I got the spins so bad I had to lay down for hours, unable to move. I learned for myself, the way many teenagers do, that pot wasn’t for me. Until three years later when I found myself in a large group of kids in New Orleans celebrating our newfound adulthood during Mardi Gras.

I never told my mother. Sometimes it’s OK for kids to not tell their parents everything. What’s important is that I knew my mother would always be there for me. I may not have trusted her to react the way I wanted with news of my bad decisions, but I knew I could trust her if I ever needed help.

That’s where we need to concentrate as parents. If we go overboard with punishments and deterrents, we risk pushing our kids away, not in the healthy way in which I grew apart from parents, but in a more pronounced way where we lose our connection with our kids. Teenagers to know we’re there for them, no matter what. Trust and friendship are not the same. What they need is an innate knowledge that they can count on us when times get tough.

The last time I ever smoked marijuana was 2007. A fully fledged adult by this point, I was reintroduced to the drug by my neighbor who suffered from chronic pain. It was better, she said, than the pills the doctor tried to give her. Ever afraid of becoming addicted to pain medications, she decided instead to smoke illegal marijuana. My newly formed adult mind was blown.

But perhaps it shouldn’t have been. With the narcotic crisis in full effect now, and multiple agencies cautioning against synthetic opioids, the pain relieving qualities of marijuana may prove to be a safer and more effective long-term alternative.

Of course, the Drug Enforcement Administration has opted for the safety of tradition. Still, it has decided to start allowing research on pot to take place, reducing restrictions on research institutions looking to evaluate its benefits for cancer and epilepsy patients, among others.

Given everything we know, and everything we know we don’t know about marijuana, the best battle to fight will be for our kids. Protect them, honor them and understand that we’re there as a moral compass. The law isn’t going to tell us what to do about pot. We have to decide for ourselves. Just like our teens will. 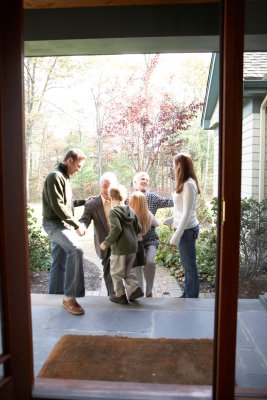 How to Help Your Kids Get the Most Out of Family Visits
Next Up: Editor's Pick