Djimon Hounsou attends the European premiere of "The Legend Of Tarzan" at Odeon Leicester Square in London on July 5, 2016.
Dave J Hogan—Dave Hogan/Getty Images
Ideas
By Djimon Hounsou
Hounsou is an actor and an Oxfam Global Ambassador

It must have looked eerily familiar to the residents of Juba, South Sudan. The impromptu checkpoints, the gunshots ringing out in the night, bodies on the streets, people scared and on the move—all reminiscent of the decades of conflict the people of South Sudan have experienced and fought so hard to escape. But what happened last month, just days before what was meant to be a celebration of the fifth anniversary of South Sudan’s independence, pushed the country even closer to the brink of war.

The tragic events unfolding in South Sudan over the past few weeks were perhaps easy to miss with all the other headlines of grief and conflict around the world. But what’s happening there should resonate here in the U.S., which played such a large part in helping the people of South Sudan achieve their independence after a long and brutal war with Sudan.

It seems like just yesterday that I visited the country, after it gained independence in July 2011. It was a hopeful time—the people I met were rebuilding their lives, beginning to pick up the pieces after decades of conflict and forging a path of peace and prosperity. But lurking everywhere I went was a threat: the unchecked proliferation of arms and ammunition and long-unresolved grievances between communities just waiting for the spark to inflame the tensions. That spark came in December 2013, when a political conflict between South Sudan’s president Salva Kiir and former vice-president Riek Machar came to a head, dragging the new country into a civil war that played on these tensions and made ready use of the easy availability of weapons.

Read more: The Only One God Left Alive

As we see time and time again in South Sudan, it is the innocent who suffer, and they did as civil war took hold and peace seemed out of reach. A tenuous agreement was reached in August of last year, but it has not yet been fully implemented, and tensions remained high even though fighting tapered off. A few weeks ago, the tense standoff between Kiir and Machar erupted into violence that once again took hold over Juba. For several days fighting between both factions led to death and displacement. In its wake, aid stocks have been looted, and the humanitarian effort in South Sudan has been stunted because of insecurity. Aid agencies helping the more than two million people who have fled their homes within South Sudan and in neighboring countries face even more challenges on top of what was already one of the most challenging places in the world.

The people I met in South Sudan were incredibly resilient. Even after so much hardship, war and struggle there was hope. Time and time again they faced violence and conflict with the hope of a better future and the incredible strength that it takes to survive in the midst of so much horror. But now, they are losing confidence that their leaders can see them out of this crisis without help from the international community. The first and most important stop would be an embargo to stop the flow of arms.

In the midst of all of this it’s easy to feel that South Sudan is a lost cause. It’s tempting for us to throw our hands up and walk away. It would be to our great shame—the path to peace is not impossible to find, and the people of South Sudan need us now more than ever. The U.S. was key in supporting South Sudan’s independence and has a long history supporting South Sudan’s leaders and helping to provide assistance to its people.

Leadership from the U.S. in the midst of this latest conflict has been lacking. Direct engagement from President Obama could make all the difference right now—that means speaking to the leaders to encourage an agreement that could lead to lasting peace, working with other world leaders and continuing to support the much-needed humanitarian effort. It is also imperative that the U.S. works to involve ordinary citizens in South Sudan—not just those who have taken up arms. Conflict thrives in shadow; diplomatic light can make all of the difference.

But none of this will work if the parties to the conflict remain able to acquire weapons to continue their fighting. That is why we need the U.S. to ensure the U.N. Security Council imposes an immediate arms embargo on South Sudan. There is an opportunity right now to move members of the Security Council to impose an arms embargo to help ensure a return to peace and protect civilians. It will send a strong message that the international community will not enable those fighters who have shown a complete disregard for the laws of war easy access to weapons and ammunition with which they can rearm and commit or facilitate further abuses.

In this latest round of fighting tanks, helicopter, gunships and heavy weaponry were used; civilian neighborhoods were shelled. Thousands of civilians fled to U.N. compounds which were also hit by mortar and heavy artillery. More weapons and ammunition are not what South Sudan needs now. There’s no question that an immediate U.N. arms embargo could do a world of good and help set the wheels in motion for a lasting peace in South Sudan. 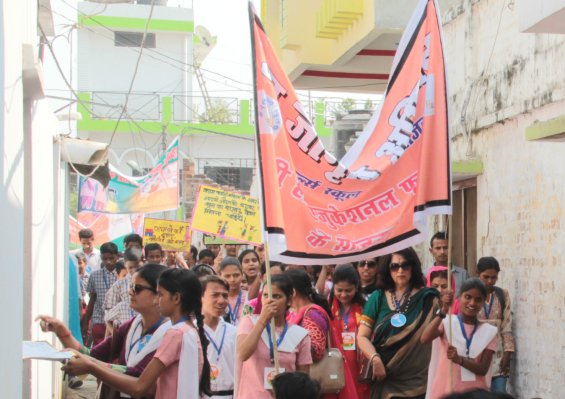 How One Indian School Is Working to End Child Marriage
Next Up: Editor's Pick