This Is Why Vladimir Putin Is Accusing Ukraine of Terrorism

It would have been a suicide mission, and a rather pointless one. But that is roughly the picture that Russian President Vladimir Putin painted on Wednesday when he accused Ukrainian saboteurs of trying to infiltrate Crimea and commit what he called an act of terror. On Russian state TV, newsreels even showed the supposed weapons cache the Ukrainians allegedly tried to use, including bombs fashioned out of plastic soda bottles and other improvised explosives. But the story didn’t make a lot of sense.

However decrepit and dysfunctional the Ukrainian army may be, they still have enough military factories left over from the Soviet Union to arm their soldiers, who would have no need to make their bombs using recipes out of the The Anarchist Cookbook. Besides, what would they expect to achieve with these weapons? Since annexing Crimea in 2014, the Russian military has sealed it up about as tight as its stockpiles of nuclear weapons—which, by the way, Russia has threatened to use in defending Crimea if necessary.

Read More: Dear Mr. Putin: Here’s Why You Should Help Save My Beloved BlackBerry

That means any Ukrainian scheme to get back Crimea, or even to destabilize it, using an amateurish bunch of guerilla-saboteurs, would have been stupid, senseless and self-defeating, as Putin himself admitted during a press conference held at the Kremlin on Wednesday. “It is foolish because you cannot have a positive impact on the people in Crimea in this manner,” Putin remarked. By setting off bombs in their cities? Clearly not.

So what really happened? Given the dearth of reliable information coming from the heavily militarized border between Ukraine and Russian-occupied Crimea, it’s very hard to tell. According to local media reports, there does appear to have been a flare-up in fighting near that border over the weekend, and Russia has been moving forces toward the area from its massive Crimean military base. But Ukraine says that it made no attempt to penetrate the de facto border, and it insists that Russia is just trying to invent a pretext for another invasion.

From what we know, there seem to be a couple of scenarios in Putin’s mind, the more likely of which is the more banal. Russia needs the West to lift the sanctions it imposed in retaliation for the seizure of Crimea. But for that to happen, both Russian and Ukraine would need to fulfill the peace accord they signed in February of last year, known as Minsk II. Reached through the mediation of France and Germany, the deal is at a standstill, with both Kiev and Moscow accusing each other of not doing their part.

Both of them are right. Among other points in the deal, Ukraine has failed to grant a blanket amnesty for the Russian-backed separatists who have been fighting the Ukrainian military in the eastern Donbass region for more than two years. For its part, Moscow has refused to give Ukraine control of its eastern border, as that would cut the separatists off from their supply lines in Russia.

In trying to break this stalemate, Putin has tried to convince the West that Ukraine is really at fault, as he again sought to do on Wednesday. “I would like to appeal to our American and European partners too,” he said. “I think it is now clear to all that the authorities in Kiev today are not looking for a solution to the problem through negotiations, but are resorting to terror.”

In other words, it does not make sense to maintain the sanctions against Russia when the deadlock in the peace talks is all Ukraine’s fault. The Europeans now have to let that message sink in before the next round of peace talks are set to begin in early September, because as Putin noted on Wednesday, these talks “would not make much sense right now.” Not unless the Europeans can get their Ukrainian friends into line.

Read More: Putin Is on a Foreign-Policy Winning Streak

In pushing this same agenda, Russia has also kept up an ongoing dialogue about Ukraine with the U.S., applying similar arguments to get the U.S. sanctions lifted. This effort has even extended into Syria, where Russia has sought to form an alliance with the U.S. in fighting ISIS terrorists. As if to highlight the usefulness of such an alliance, the Russian military claimed on Thursday that its warplanes had destroyed a chemical munitions plant in the ISIS capital of Raqqa.

All of this is meant to convince the U.S. that the crisis in Ukraine should be put to one side—and all the related sanctions should be lifted—in order for the world’s leading military powers to focus on the terrorist threat emanating from Syria. Painting the Ukrainian armed forces as terrorists in the making would seem to bolster the Russian argument.

But the U.S. does not seem to be buying it. On Thursday, the U.S. ambassador in Ukraine, Geoffrey Pyatt, said he has seen nothing to corroborate Russia’s claims of a sabotage mission against Crimea. Indeed, the Russian security services have not provided any evidence to support its claim that one of its officers was killed, along with a Russian soldier, in defending Crimea from Ukrainian attacks over the past few days.

All we have seen on Russian state TV is a corpulent man in handcuffs—identified as Evgeny Panov, an agent of the Ukrainian military intelligence forces—standing silently before the Russian news cameras with a bleeding gash in his forehead. According to his Russian interrogators, the alleged saboteur has confessed to his crimes. But that may mean little to the West—“Russia has a record of frequently levying false accusations at Ukraine to deflect attention from its own illegal actions,” Ambassador Pyatt tweeted on Thursday.

In the weeks before the annexation of Crimea, for instance, Russian state media reported that Ukrainian “fascists” and right-wing militias, having supposedly seized power in that winter’s revolution, were planning to move south in order to pacify Crimea’s ethnic Russian majority. These reports were false. Fascists had not seized power in Kiev, and there were no paramilitary columns moving in Crimea’s direction. But the propaganda effort helped to stir up enough panic among Crimean residents for many of them to welcome the Russian troops who promptly came to occupy the peninsula and prepare its annexation.

The fact that Putin’s claims on Wednesday might provide a similar casus belli for further military action are certainly cause for alarm, and they point to the other scenario that Putin might be contemplating. Since taking control of Crimea, Russia has spent billions of dollars keeping it supplied with fuel, food, water and electricity, all of which this region had previously received from Ukraine. In November, a group of pro-Ukrainian saboteurs blew up the electricity pylons that carry power from mainland Ukraine to Crimea. The Russian-backed leaders of the peninsula were then forced to declare a state of emergency, as the resulting blackouts had created a heating crisis across Crimea just as the Eastern European winter was setting in.

That act of sabotage was a painful reminder of how vulnerable Crimea became after the swift and bloodless Russian annexation. In order to really secure its hold over this territory, Russia would either need to spend enormous amounts of money on new infrastructure—such as bridges, power lines, energy pipelines and so on—that would connect Crimea to the Russian mainland, or it would need to launch an all-out invasion of Ukraine in order to secure a land bridge through the country’s eastern and southern regions all the way to Crimea.

But Putin likely realizes that he cannot afford to do either, at least not any time soon. With so much of his military firepower tied up in Syria, it would put enormous strain on the Russian armed forces to declare a full-scale war against Ukraine, which has spent the last two years building up defenses against exactly that kind of attack. It is also far from clear that the Russian people would support such a war, much less in retaliation for a bunch of alleged saboteurs in Crimea with backpacks full of soda-bottle bombs.

In its monthly “fear map” survey, which was published on Wednesday, the Kremlin’s leading pollster found that Russians are currently most afraid of “international tensions, conflicts between nations and military actions.” Even issues such as crime, healthcare and the devaluation of their savings now worry Russians far less than the possibility of war, the survey found.

So Putin should hardly be eager to grab at this chance to attack Ukraine. With the recent collapse in the price of oil, Russia’s main export, the national economy shrank by nearly 4% last year, and is projected to contract by at least another 2% this year, according to the World Bank. In order to ease some of that pain, Russia needs the West to allow normal trade relations to resume. Of course, Putin is far too proud, and far too invested in his image as a counterweight to the arrogant West, to start pleading for the U.S. and Europe to drop their embargoes.

But he might at least try to achieve the same ends by casting Ukraine’s leaders as a bunch of terrorists. At a minimum, this would mean offering Western leaders an off-ramp in their ongoing support for Ukraine. Now it’s up to them to decide whether to take it. 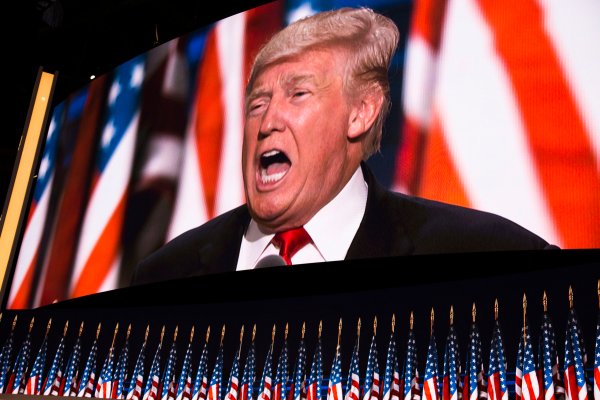 Trump Makes U.S. a Target
Next Up: Editor's Pick