President Obama Is Not the 'Founder of ISIS.' Here’s Who Really Started It

Donald Trump accused President Obama of being the “founder of ISIS” Wednesday, the latest incendiary comment from a candidate in the middle of a meltdown. Of course, Obama did not found ISIS and has actually led a campaign that has killed thousands of ISIS militants.

Labeling any individual the sole founder of ISIS would probably be an oversimplification given the wide range of factors that contributed to its rise. But two figures—Abu Musab al-Zarqawi and Abu Bakr al-Baghdadi—stand out as the most pivotal in the organization’s ascent to international infamy.

In the late 1990s, when President Obama was an Illinois state senator, Jordanian national al-Zarqawi founded the group called Jama’at al-Tawhid wal-Jihad with the goal of overthrowing the government of Jordan for not conforming with his extremist Sunni view of Islam. The group hatched various plots in the following years, but it wasn’t until the 2003 U.S. invasion of Iraq that group gained real traction. The U.S. invasion destabilized the country and allowed the group to grow.

Al-Zarqawi pledged allegiance to Osama Bin Laden and changed the name of the group to al-Qaeda in Iraq. The group battled U.S. and Iraqi government troops and its suicide bombing campaigns became infamous. Before long, al-Zarqawi began to conceive of himself as a religious leader, in addition to a military commander. Strict Sharia law was enforced complete with beheadings for violators. The U.S. killed al-Zarqawi in 2006, but the group continued.

Abu Bakr al-Baghdadi came to helm of al-Qaeda in Iraq in 2010 after serving as long as four years in the U.S. prison facility Camp Bucca along with other future top ISIS officials. But after taking power in 2011, al-Baghdadi cut off ties with al-Qaeda and changed the name of the group to the Islamic State in Iraq. He targeted Shiites and planned to unite the Arab world under a single Sunni regime. In 2013, he changed the group’s name to the Islamic State of Iraq and Greater Syria (ISIS) to reflect the expanded ambition.

Trump supporters have tried to explain their candidate’s “founder of ISIS” comment as a rhetorical flourish meant to highlight how Obama’s policies have contributed to chaos in the region. There’s an element of truth to the clarification. Some national security experts have said that pulling out of Iraq in 2011 left the country vastly unprepared and helped create an environment where ISIS could expand and thrive. But the real blunder, many experts say, was President George W. Bush’s decision to invade Iraq in the first place without any real plan to bring stability. Mistakes aside, calling any U.S. president the “founder of ISIS” is a grave misrepresentation. 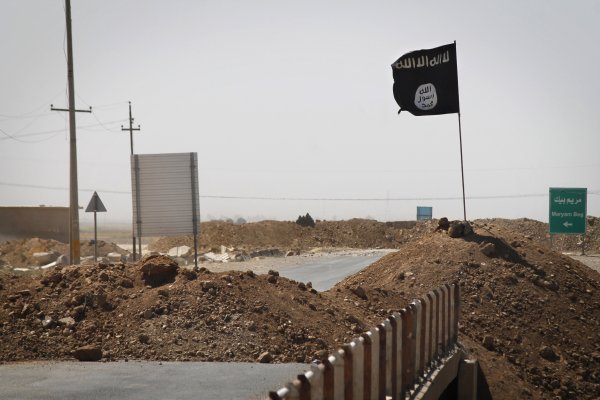 Everything We Know About ISIS Spy Chief Abu Mohammad al-Adnani
Next Up: Editor's Pick