Turkey and Russia Get Closer--and Worry the West

Last November, Turkey shot down a Russian fighter jet near the country’s border with Syria, provoking fears in Western capitals that Ankara and Moscow might stumble into conflict. Russia then imposed sanctions that badly damaged Turkey’s economy, and a chastened President Recep Tayyip Erdogan apologized in June. In July, Erdogan faced down a coup attempt; his subsequent detention of tens of thousands of suspected enemies has drawn sharp criticism from his U.S. and European NATO allies. On Aug. 9, he made headlines by flying to Russia for his first meeting with Vladimir Putin since the plane fiasco, and the West now fears that Turkey and Russia are moving too close together.

We live in fast-moving times.

The two Presidents feel a common grievance toward the West. Putin has accused U.S. and European leaders of violating agreements by expanding NATO to Russia’s borders and fomenting unrest in nearby Georgia and Ukraine. Pro-government Turkish newspapers have accused the U.S. of orchestrating the coup, and Erdogan has angrily rejected European criticism of his response to it.

Putin expressed support for Erdogan’s government during the coup’s early hours and has remained silent as Erdogan jails those his government accuses of treachery. The West, by contrast, was slow to support Erdogan that night and has sharply criticized his crackdown. (Turkey’s government has reportedly detained the Turkish pilots who shot down the Russian aircraft on suspicion of involvement in the coup attempt.)

Following their meeting, both men will get some things they want. Putin will raise doubts within NATO about member state Turkey’s reliability and gain a freer hand to extend Russia’s naval capabilities in the Black Sea. He might also get a softer Turkish attitude toward both Russia’s treatment of Crimean Tatars in Ukraine and toward Syria’s Bashar Assad, a man Putin considers an ally and Erdogan has denounced as an enemy. Erdogan will get an easing of Putin’s sanctions, helping Turkey restore food exports to Russia and welcome more Russian tourists. The two leaders will move forward on stalled energy projects that can profit both sides.

Read More: This Is Why Vladimir Putin Is Accusing Ukraine of Terrorism

The U.S. and Europe will watch carefully to see just how far better relations might go. Will Turkey continue its push for full membership in the Shanghai Cooperation Organization, a China- and Russia-led alliance that NATO fears might one day become a military bloc? Erdogan has edged in that direction for years. It’s hard to imagine a better way of thumbing his nose at the West.

But there’s a limit to how far this might go. Erdogan won’t withdraw from NATO, and he isn’t likely to cut ties with the U.S. But he will improve relations with Russia and China where he can–if only to show he can make Western critics sweat. 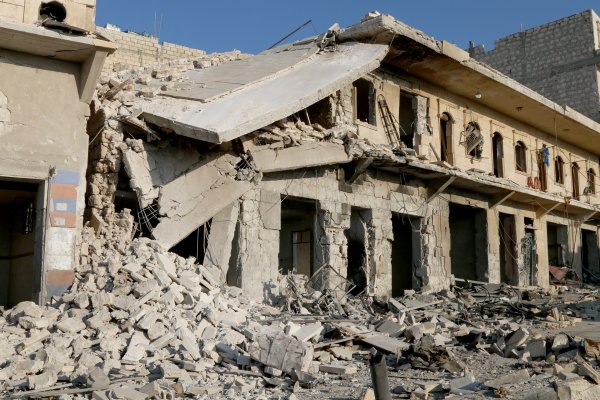 Three Die in Suspected Chlorine Gas Attack in Syria
Next Up: Editor's Pick