Katie Ledecky Dominates in the Pool as the Medals Stack Up

(RIO DE JANEIRO) — After the monumental wins by Michael Phelps and Katie Ledecky 24 hours earlier, Wednesday was supposed to be a quieter night for the podium-dominating U.S. swimmers at the Olympic Aquatics Stadium. Not exactly. All that happened was that Ledecky spectacularly added her fourth medal of the Games, Phelps put himself in position to win No. 4, Josh Prenot earned a surprise breaststroke silver and Nathan Adrian nearly pulled off a feat that no American had accomplished since 1928.

Ledecky hoped to extend the U.S.’s dominance of the women’s 4×200-meter relay, an event Americans had lost only once since it was added to the Olympic program in 1996. Having anchored the 400-free relay team to a silver medal on Day One in Rio, Ledecky was called upon to fill the closer role again in what figured to be a tightly contested race.

Veteran Allison Schmitt, one of America’s most decorated Olympians, led off, delivering a 1:56.21 split in what was likely the final swim of her career. Leah Smith, the 400-free bronze medalist from the University of Virginia, dived in just a fraction behind Sweden but was soon overtaken by Australia’s fast-charging Emma McKeon. Halfway through the race the Aussies were up by almost half a second. The U.S.’s third leg swimmer, Maya DiRado, double medalist in the individual medleys, closed the margin briefly, then faded in the final meters. When Ledecky dived in for the anchor leg, she was a body length behind.

But she is, as Sweden’s star Sarah Sjostrom had said a day earlier, “the queen of freestyle.” Ledecky ate up Australian anchor Tamsin Cook. Within 75 meters she had passed Cook and from there the race was over. Ledecky reached the finish in 7:43.03, with Australia second in 7:44.87 and Canada third in 7:45.39 Ledecky had swum a 1:53.74 split, by far the fastest of the race; only one other swimmer had broken 1:55 (and barely).

Ledecky now sets her sights on completing her sweep of the 200, 400 and 800 freestyles, a feat that has been accomplished by only one other swimmer, the U.S.’s Debbie Meyer in 1968. Her last two swims of the Games will come in her strongest event, the 800, with the final Friday night.

The 31-year-old Phelps, still recovering from his arduous Tuesday night double, continued his extraordinary meet. He cruised to the third-fastest time in the afternoon heats of the 200-meter individual medley, an event he has won at three straight Olympics, and then clocked the fastest time in the evening semifinals (1:55.78). It set the stage for a busy Thursday. Phelps will swim two qualifying races in the 100 butterfly as well as the 200-IM final, expected to be a showdown with pre-Games favorite Kosuke Hagino of Japan—the winner of the 400 IM in Rio—and U.S. teammate Ryan Lochte, the second-fastest qualifier in the semis (1:56.28).

Prenot’s silver came in a wild 200 breaststroke race in which Japan’s Yasuhiro Koskei went out far ahead of world-record pace but faded. With attention focused on the top qualifiers in the middle lanes of the pool, Kazakhstan’s 21-year-old Dmitriy Balandin snuck up in lane eight and reached the finish in 2:07.46. He touched .07 ahead of Prenot, a Cal senior and first-time Olympian who broke the American record earlier this year. The victory gave Kazakhstan its first-ever medal in swimming.

The night’s marquee event was the men’s 100 free, in which Adrian, 27, one of several U.S. co-captains along with Phelps and Schmitt, hoped to become the first American to repeat as champion since Johnny Weissmuller in 1928. In London he had ended a 24-year U.S. gold-medal drought in the event by upsetting Australian favorite James (the Missile) Magnussen by .01. Here his rivals included two young Aussies, pre-Games favorite Cameron McEvoy, 22, a brainy physics major and aspiring astronaut known as the Professor, and fast-improving Kyle Chalmers, 18, the son of a former Aussie rules football player, who had considered a career in that sport.

Adrian had endured a rollercoaster two days. He had nearly failed to advance out of the heats on Tuesday afternoon, qualifying 16th while still tired from his blistering 46.97 anchor leg on the U.S.’s winning 400-free relay team. On Tuesday evening, he had bounced back and swum the fastest time of the semifinals, 47.83.

The final began promisingly for him. At the 50 mark, Adrian was looking strong in second place behind Santo Condorelli of Canada. McEvoy was in fourth. Chalmers was trailing nearly everyone else in the field.

That’s Chalmers’s style, no secret to Adrian, a student of the sport who studies opponents on video to scout their race strategies. Little would that help him on this night. In the last 50 Chalmers cranked up his pace. He picked off one swimmer after another, including, in the final meters, Adrian.

Chalmers touched the wall in 47.58, just ahead of surprise silver medalist Pieter Timmers of Belgium, a 28-year-old who had never before reached the Olympic podium. Adrian finished in 47.85 to earn the bronze.

The 100 free has always been one of swimming’s glamor events, reigned over by high-profile champions ranging from Weissmuller to Duke Kahanamoku to Mark Spitz. Newcomer Chalmers may be a big name too, one day. Given his talent and youth—his time not only won him the gold medal but also set a world junior record—he could defend the title more than once over the next decade.

But Olympics are all about the here and now. Chalmers had written his name in the history book and given Austrialia a rare Rio victory over the mighty Americans. That was plenty for one night 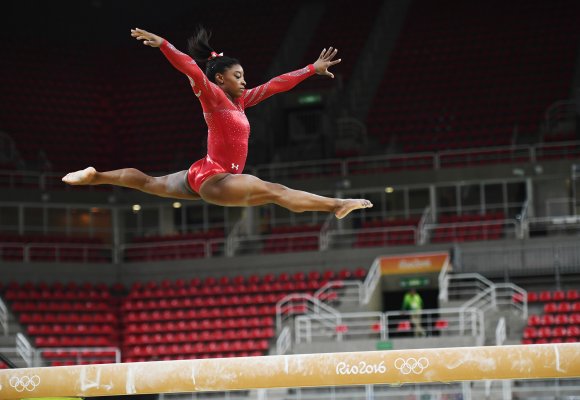 What Makes Simone Biles Unlike Any Other Gymnast
Next Up: Editor's Pick