An Indonesian policeman holds a weapon while walking near a broken glass window from a Starbucks outlet in Jakarta on Jan. 14, 2016, after militants launched a deadly gun-and-bomb assault
Beawiharta Beawiharta—Reuters
By Yenni Kwok

Indonesia’s financial intelligence agency has warned security ministers and officials that a large portion of the money used by terrorist groups in Indonesia originates from overseas.

The Jakarta Post reports that officials from the Financial Transaction Reports and Analysis Center (PPATK) told an international counterterrorism meeting in Bali earlier this week that over $763,000 was transferred from foreign countries to fund terrorism in Indonesia between 2014 and 2015.

Bloomberg meanwhile reports that a regional risk assessment jointly prepared by Indonesia, Malaysia, Singapore and other countries in the region also concluded that groups like ISIS are increasingly channeling funds into Southeast Asia to finance terrorism.

“Given only small sums are required to stage a deadly attack, even modest amounts of funding from foreign terrorist groups pose a significant risk to the region’s security,” the assessment said, according to Bloomberg. “The cross-border movement of cash is the highest-risk method of moving terrorism funds across the region.”

Security ministers from more than 20 countries, including Indonesia, Australia, the U.S., the U.K., India and China attended the counterrorism meeting in Bali this week.

There are widespread fears that militant groups such as ISIS are expanding in Southeast Asia, particularly in Indonesia and the southern Philippines. The group has even launched a publication to recruit Southeast Asian fighters. 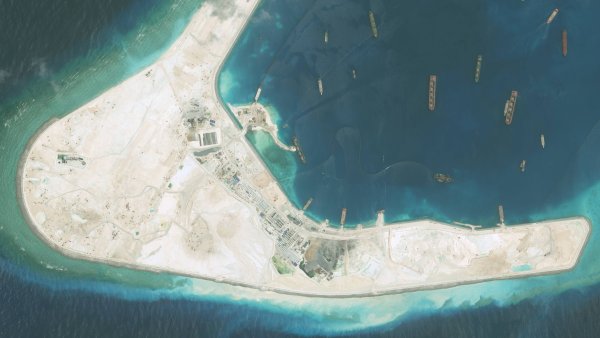 Chinese Satellite Will 'Safeguard Rights' in South China Sea
Next Up: Editor's Pick