Kohei Uchimura of Japan reacts after competing on the horizontal bar during the Men's Individual All-Around final on Day 5 of the Rio 2016 Olympic Games at the Rio Olympic Arena on Aug. 10, 2016 in Rio de Janeiro.
Laurence Griffiths—Getty Images
By Alice Park/Rio de Janeiro

Japan’s Kohei Uchimura, or King Kohei as he’s known, continued his reign, squeaking by Ukraine’s Oleg Verniaiev to win his second Olympic men’s gymnastics individual all-around title by 0.099 points. Uchimura has won every all-around at world championships and Olympics since 2009.

Trailing Verniaiev through five of the six rotations, Uchimura earned his medal in a dramatic showdown on the high bars, where his breath-taking high flying routine scored 15.8, a full point higher than Verniaiev. The two were last to compete, and after Uchimura’s score rallied the crowd, it fell silent as the Ukranian worked the bar. The crowd waited for the title-making score for seven minutes. Great Britain’s Max Whitlock won bronze.

The win marks the second gold in Rio for Uchimura, a six-time world all-around champion. On Monday, he and his teammates won the men’s team gold, its first since 2004, a title that Uchimura said means more than the individual medal.

Such hauls are becoming the thing among elite gymnasts. On the women’s side, American Simone Biles also made history as the first woman to win three back to back world titles, and she’s the favorite for the gold in Rio on Thursday. She also qualified for three event finals, which means she could earn up to five medals.

So who is the better gymnast? “Oh Uchimura of course,” said Eiki Yamamoto, a logistics analyst from Tokyo who traveled to Rio to watch his countrymen compete. Uchimura’s teammate Kenzo Shirai’s father agreed but was more diplomatic. “It’s impossible to compare because Uchimura won the world championship six times and the American three times,” he said. “Winning world championships six times is amazing.”

Even Americans were on the fence. “It’s like comparing apples to oranges,” said Kyra Schapiro, who was watching with her family from Needham, Mass., U.S. gymnast Aly Raisman’s home town. The Schapiros cheered along with Japanese fans sitting in the row below them “They were cheering USA with us, and we were cheering Japan with them,” said Schapiro’s brother Max. Isn’t that what the Olympics are all about? 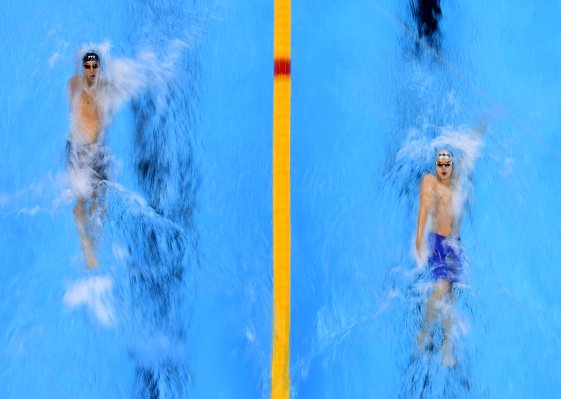 The Pool in Rio Might Literally Be Helping Swimmers Break World Records
Next Up: Editor's Pick