Why Washington Is Worried About a Shifting Rebel Alliance in Aleppo

The city at the heart of Syria’s civil war has seen a dramatic reversal in fortunes in recent days, as rebel fighters in Aleppo made a daring advance against forces loyal to the regime of President Bashar Assad. Opposition fighters reported that they had punched through pro-regime lines on Aug. 6, piercing a weeks-long siege on the eastern half of the city held by the opposition, even as they were able to surround the regime-held western side of the city.

The breakthrough has raised morale among the rebels and their civilian supporters but is unlikely to be a turning point in this five-year civil war, and may even deepen the humanitarian crisis in an already devastated city. The corridor created by the advance is narrow and no sustained supply route has been established. The shift on the battlefield now threatens to place both east and west Aleppo under de facto siege, by separate sides in the conflict. The U.N. humanitarian chiefs for Syria, Yacoub El Hillo and Kevin Kennedy, said in a statement that over two million Syrians now live in “de facto fear of besiegement.” Aleppo, they said, is “a city now united in its suffering.”

The opposition advance in Aleppo represents a rebuke to the Assad regime and its allies, who consider the city the backbone of the armed insurrection that sprang out of a popular uprising in 2011. Assad’s forces are backed by troops from Iran and the Lebanese militant group Hizballah and have been bolstered since September 2015 by the might of Russian air power. Only weeks earlier, the opposition faced total encirclement of eastern Aleppo. Similar sieges imposed by the regime elsewhere in Syria have resulted in starvation and mass death.

The turnaround in fortunes has come just as the balance of power within the groups arrayed against the regime has swung towards Islamist hardliners, complicating matters for Western powers that seek Assad’s removal. The coalition of opposition groups that came together to fight the siege of eastern Aleppo in July included the jihadist fighters of Jabhat Fateh al-Sham, a newly renamed group that declared a split from al-Qaeda in July. Formerly known as Jabhat al-Nusra, they now fight in coordination with more mainstream Islamist groups and battalions from the Free Syrian Army, a rebel umbrella group that contains forces supported by Western governments.

The role of the hardliners in the current opposition offensive unsettles some moderate Syrian opposition activists. Popular support has waned for moderate Syrian rebels, who say the U.S. and other Western supporters have failed to offer them enough support to turn the tide of the war. The jihadists however scored a significant victory this week with the estimated 300,000 people who live in the rebel sector.

The shift should unnerve Washington too, says Robert S. Ford, the former U.S. ambassador to Syria and a senior fellow at the Middle East institute in Washington. “The United States did nothing to help break that siege, at least nothing that anyone could point to,” he told TIME. U.S. Secretary of State John Kerry had been trying to negotiate a ceasefire with Russia that might have broken the siege on eastern Aleppo, but the talks failed. “The end result is American credibility suffers a blow,” Ford said, “the credibility of extremists that we don’t like in Fateh al-Sham goes up, and the Americans ultimately are in control of nothing.”

The jihadists are only one component of the broader coalition that pushed through the siege on eastern Aleppo, but their role is a significant one. “Fateh al-Sham is going to be a major source of military dynamism for Syria’s rebels, and I expect it’ll have a large and growing role in setting the terms of political control in rebel-held areas,” said Beirut-based analyst Sam Heller.

As ever the civilians in Aleppo are paying the greatest toll. Nearly two million people there have no access to running water, according to the U.N. children’s fund. In rebel-held areas, airstrikes continue to devastate the medical infrastructure. In Aleppo alone, there were at least 15 attacks on medical facilities or personnel in July, according to the Syrian American Medical Society, which said that as of Tuesday night, a tiny core of 35 doctors are serving the estimated 300,000 civilians in the city’s east. The rebels ensured this week that they will not go quietly into the night, but observers also fear a ferocious reaction from the pro-regime side. For the long-suffering people of Aleppo, there is no end in sight. 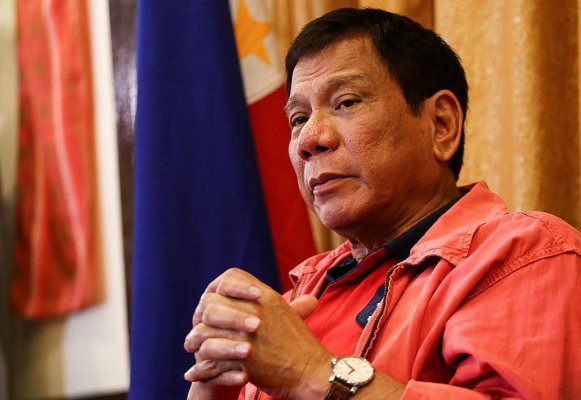 Philippine President Rodrigo Duterte Calls US Ambassador ‘Gay Son of a Whore’
Next Up: Editor's Pick