Like most computers, Apple’s laptops have become slimmer, more attractive, and faster over the years. This is true of the MacBook Pro, Apple’s more powerful portable computer aimed at professionals, as well as its compact premium 12-inch MacBook.

But save for a few physical changes (a pressure sensitive trackpad, the 12-inch MacBook’s redesigned keyboard), using an Apple laptop made in 2016 isn’t much different than using one from five years ago. This may change when Apple introduces its next MacBook Pro. That device is said to be getting a strip-like touchscreen just above the keyboard where the function keys currently sit, according to reports from Bloomberg and others.

Unlike a normal keyboard, the rumored touch panel would be able to change its appearance based on context, Bloomberg reports. When iTunes is open it might display playback controls, while switching to word processing software would turn them into editing shortcuts. The overall goal is to simplify keyboard shortcuts, eliminating the need to remember key combinations for each app or program you use.

The rumored addition makes sense given some of the similar features and products Apple has recently released. Take the iPad Pro’s Smart Keyboard, for example. It pulls up on-screen keyboard shortcuts for the app currently in use when users hold down the command key. The miniature touch panel reportedly coming to the MacBook Pro seems like an evolution of that idea.

Likewise, Apple has been adding new capabilities to its iPhones and iPads to make them more contextually aware. Swiping to the right of the iPhone’s touch screen will pull up a list of suggested apps. Plug in your headphones and your iPhone will automatically nudge you to launch Spotify or Apple Music. A smart command key row would allow Apple to bring similar context-aware features to the Mac in a way that makes sense.

That said, such a move would be indicative of Apple’s relative resistance to mess with its laptops all that much. As Windows-based manufacturers are experimenting with all kinds of touchscreen hybrid laptop-tablet designs, Apple has shown no sign of doing anything similar (The firm’s CEO, Tim Cook, famously called PC vendors “confused” back in 2013). Sure, there’s the iPad Pro, but that’s more of a tablet with some laptop-like functionality. And new features like Handoff have tied the Mac and iPhone software more closely together, but Apple shows no sign of going so far as to blend the two device’s operating systems, as the Windows world has done. For now, a row of touchscreen keys might be the most Apple is willing to experiment with its laptops. Some might call this a lack of innovation. But the Windows hybrids have done little to revive the flagging PC business — so Apple is probably wise to keep its focus elsewhere. 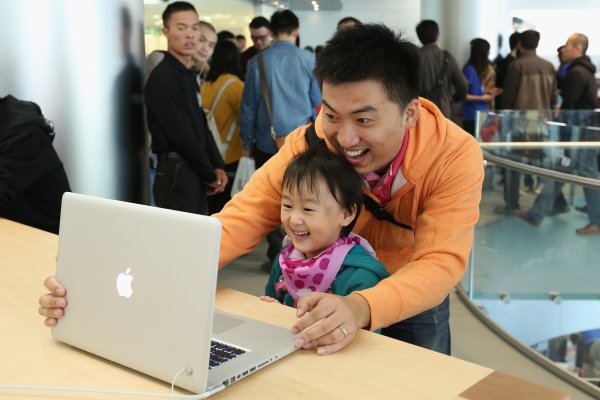 Apple's Laptops Are Getting Big Upgrades
Next Up: Editor's Pick