Donald Trump Is Missing an Essential Fact About the Debates

Will Donald Trump try to weasel out of the presidential debates? On the one hand, he has verbally committed to three joint appearances with Hillary Clinton this fall. On the other, he seeks to renegotiate the terms under which the matches will take place. At some point, and soon, Trump will have to decide which matters more: having his conditions met, or stepping into the spotlight as a presidential debater before the largest audience of his career.

During the primary season Trump wielded substantial influence over how the Republican debates were staged, particularly after the kick-off event in Cleveland broke viewership records. Those 24 million people weren’t tuning in for Jeb Bush, a reality that handed Trump the leverage to make demands. Some of the demands were met—shorter program lengths, the inclusion of opening and closing statements, while others were ignored—like the suggestion that the networks contribute their debate profits to charity.

But enormous differences separate primary debates from general election debates, not the least of which is that primary debates fall under the guise of commercial programming, while general election debates are classic examples of public service TV. Trump got away with making demands during the primaries because the cable news networks that sponsored the debates needed his participation to boost ratings. General election match-ups do not include commercials, and haven’t since their inception in 1960. The ratings for presidential debates, huge as they are, cannot be monetized. Debates are pure civic virtue—that’s one of their attractions.

Over the past year the Commission on Presidential Debates has announced the dates, locations and formats of the 2016 general election debates. The Clinton campaign recently accepted these terms, without fanfare and without conditions. Trump, by contrast, is positioning himself as the programs’ would-be executive producer, the type who steps in at the last minute and starts making troublesome changes.

Specifically, Trump has complained about the scheduling of debates against NFL games, ignoring the fact that presidential debates routinely compete with professional sporting events. The commission’s carefully chosen dates were announced almost a year ago, and the host institutions—college campuses across the U.S.—have spent millions of dollars preparing around that calendar. Furthermore, in an age when viewers are adept at juggling multiple screens, such programming conflicts may be irrelevant.

Trump says he wants a voice in choosing debate moderators. In early rounds of presidential debates, from Kennedy-Nixon through the 1980s, this was standard practice. But over the past few cycles the debate commission has made a point of announcing the slate of moderators before the campaigns dive into the nitty-gritty of debate planning. Effectively this has cut candidates and handlers out of the process — that was the commission’s goal, and it’s a laudable one.

Because Trump sees himself as a television maestro, someone with fabulous ideas, we can expect him to weigh in on matters of format and production. Will he ask for a more self-serving structure than the one that’s being proposed? Under the current plan, two of the three debates involve several rounds of 15-minute open discussion periods — hardly Trump’s thing. It is conceivable that he may lobby for a repeat of the Sarah Palin format in her 2008 debate with Joe Biden: ultra-short response times that favor memorized sound bites over sustained arguments. Against Hillary Clinton, this may be Trump’s best hope.

Trump may also attempt to negotiate down the length of the debate — say, from 90 to 60 minutes. In the primary debates he always had multiple co-stars onstage, which permitted him to rest between rounds. One-on-one against Clinton, that cushion vanishes. Over a prolonged period of time, Trump’s one-dimensionality is likely to become all the more obvious.

Would Trump really ditch out of the debates if producers ignore his demands? Undoubtedly, the prospect of three 90-minute jousts with an adversary as practiced and capable as Hillary Clinton is daunting, and any rational reading of the situation ought to send him running for the exits. Yet Trump may be constitutionally unable to resist the siren song of audiences that could approach 100 million people in America alone. For Donald Trump to walk away from that—well, it just doesn’t sound like Donald Trump.

Alan Schroeder is a professor in the School of Journalism at Northeastern University in Boston and the author of Presidential Debates: Risky Business on the Campaign Trail. 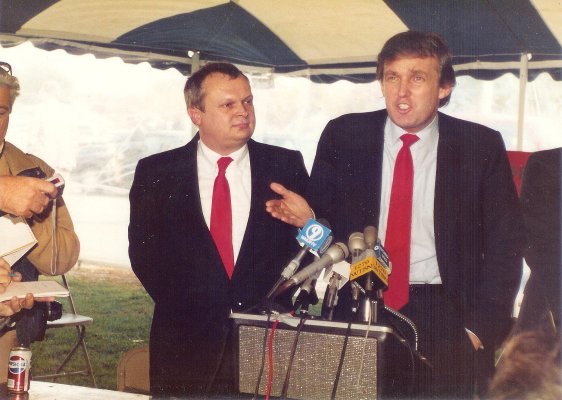 Meet the Man Who Encouraged Donald Trump to Run for President in 1987
Next Up: Editor's Pick