A huge dossier of purported documents from an Australian detention center has been leaked, and appears to paint a chilling picture of the systemic abuse of asylum seekers — particularly women and children — at the facility.

The cache — published by the Guardian on Tuesday but not verified by TIME — comprises what the British paper says are leaked “incident reports” from a government-mandated holding facility for refugees located on the small island country of Nauru, situated about 1,800 miles from Australia. There, according to the documents, asylum seekers were allegedly subject to sexual abuse, violent assaults and dismal living conditions. One report describes a girl who had her lips sewn together; countless others chronicle the molestation of children.

The Guardian’s investigation also emphasizes the allegedly dire mental health of those asylum seekers detained on Nauru, observing several hundred instances of “threatened self-harm.” There appear to be numerous accounts of conflict between individuals detained at the camp, where basic supplies are apparently in short supply and residential tents are infested with pests.

The investigation comprises “2,116 incident reports” filed between May 2013 and October 2015. More than half of them concern children.

The detention of undocumented migrants at offshore holding facilities is of one of Australia’s most controversial policies. Last June, the U.N. condemned the practice, which it described as one of “hostility and contempt” that “set a poor benchmark for [Australia’s] regional neighbors.”

Australia’s government has in the past expressed concern over historic allegations of squalor and mismanagement at its two immigration detention camps — the other is in Papua New Guinea — but the Guardian’s report concludes that the abuses persisted in 2015. 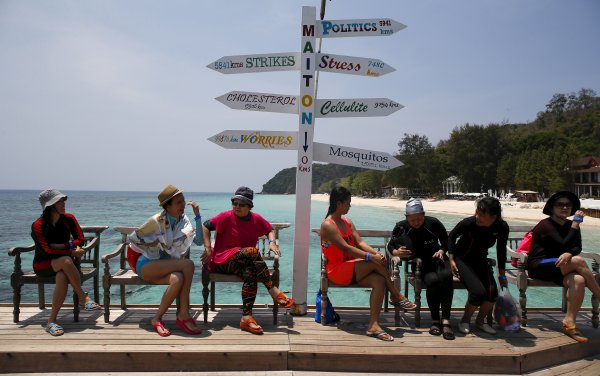 Thailand Plans to Track Foreign Tourists Through Cell Phones
Next Up: Editor's Pick