With American fans filling the Rio Olympic swimming venue with piercing screams, the most decorated Olympian ever, and another mind-bending talent who might one day surpass him, both won gold in back-to-back races Tuesday in a stunning show of force in the water. In a matter of minutes, the U.S. phenoms Katie Ledecky and Michael Phelps took over the Games.

Phelps’ win brought him his 20th gold medal and, if his triumphant victory pose was any guide, a particular sense of satisfaction. The 200-m butterfly final pitted Phelps against South African Chad le Clos, who beat Phelps to win the event at the 2012 London Olympics. Revenge was a powerful motivator, as Phelps gained a margin on the field over the first 150 meters and held off—as if by will—a rush by Masato Sakai of Japan at the end. Phelps won by.04 seconds, leaving Sakai in second and Tamas Kenderesi of Hungary in third. Le Clos finished fourth.

“I wanted that one back,” says Phelps. “I didn’t say anything to anyone else, [but] there wasn’t a shot in hell I was losing that. And if I did, every ounce that I had was left in the pool.”

Phelps’ family embraced – a routine scene at the Olympics for a dozen years. Phelps’ reaction, however, was anything but. Still in the pool, the world’s most decorated Olympian turned to the crowd—which included the exuberant NBA stars of the U.S. men’s basketball team—and raised his arms in the air, basking in the adoration while beckoning any challengers.

Phelps shared a laugh with his competition on the medals stand, then teared up during the national anthem. The 200-m butterfly was the first Olympic event Phelps ever swam, back in Sydney in 2000, when he was 15. He owns the 200 fly world record, set in Rome in 2009, and the Olympic record, set in Beijing in 2008.

“I was really going through the last 16 years,” says Phelps, explaining why he got emotional. “That event was kind of like my bread and butter. That was the last time I’ll swim it. Having that come to an end, it’s weird, it’s crazy to think about.”

Soon after, Phelps won his 21st gold, swimming the anchor leg on the 4×200 freestyle relay. The U.S. beat silver medalists Great Britain by more than two seconds. Ryan Lochte swam the third leg, winning this 12th career Olympic medal; half of them are gold.

In the evening’s fourth final, Katinka Hosszu of Hungary won her third hold medal of the Olympic, cruising to a win in the 200m individual medley.

Not long before her Phelps’s first win of the night, Ledecky—a fellow Marylander—won her second gold medal of these Olympics, and third of her career, in the 200-m freestyle final.

(Read More: Why Michael Phelps Is Into Cupping)

She didn’t dominate this race (like she did on Sunday, when she broke a 400-m freestyle world record and beat her closest opponent by nearly five seconds). The 200-m was a far tighter competition. The race was all but even in the first 50 meters, with Ledecky, a skilled distance swimmer, in a duel with Swedish sprinter Sarah Sjostrom and Australia’s Emma McKeon. As McKeon faded at the end, Sjostrom gave chase. But Ledecky beat them all to the wall.

Ledecky said she almost threw up with 25-meters left to go, so shattered was she by the long sprint. “I just knew I had to fight and get to the wall,” she said.

Both swimmers have far more to accomplish in Rio. Ledecky will swim in the 4 x 200-m freestyle relay tomorrow night, and defend the 800-m freestyle gold she won in London on Friday. She set a world record in that event in Austin back in January. Phelps meanwhile swims his last two finals on Thursday and Friday, in the 200-m individual medley and the 100-m butterfly final.

But no win Olympic win will be sweeter than his 20th, a nice round number, in a beloved event. “Just being able to see the number one next to my name again, one more time in the 200 fly,” says Phelps, “couldn’t have scripted it any better.” 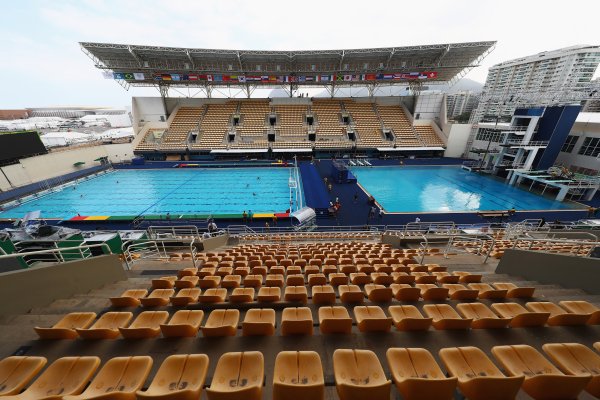 The Water in the Olympic Diving Pool Turned Green
Next Up: Editor's Pick