The National Rifle Association on Tuesday began running a new advertisement against Hillary Clinton in battleground states, targeting the Democratic nominee’s trustworthiness and her views on the Second Amendment and gun control.

The ad, which is airing in a $3 million-buy, will play on national cable and broadcast channels in Nevada, Pennsylvania, Ohio and North Carolina. It is multi-purpose: the ad questions Clinton’s support of an individual’s right to own a gun and criticizes her character, appealing both to voters who are wary of Clinton’s progressive gun stance and distrust her.

The ad begins with a Clinton actor walking onto a private jet. “She’s one of the wealthiest women in politics. Combined income: $30 million,” a narrator says. “Tours the world on private jets. Protected by armed guard for 30 years. But she doesn’t believe in your right to keep a gun at home for self-defense.”

“An out-of-touch hypocrite,” the narrator continues. “She’d leave you defenseless.”

Gun rights advocates have said Clinton is misleading the public, pointing toward her comments last October that it would be “worth considering” implementing the mandatory gun buyback program in place in Australia, as well as remarks at a fundraiser last year when she said “the Supreme Court is wrong” on the Second Amendment.

Clinton has said she believes the Supreme Court’s ruling in D.C. v. Heller, which overturned Washington D.C.’s safe storage laws for guns and affirmed an individual’s right to bear arms, was wrongly decided.

“I’m not here to repeal the Second Amendment. I’m not here to take away your guns. I just don’t want you to be shot by someone who shouldn’t have a gun in the first place,” Clinton said at the Democratic convention last month.

She said last October that it would be “worth considering” gun buyback programs but has not made that a part of her campaign.

It is notable that the NRA’s new ad is only partly about gun control, and focuses also on Clinton’s status and wealth, aiming to portray her as elitist and out-of-touch. The new ad would is meant to galvanize Second Amendment voters and also target voters who don’t vote on gun control. It is the third ad the NRA has run this cycle and part of nearly $6 million the group has spent this year.

The NRA was one of the first national interest groups to endorse Donald Trump back in May before he had officially won the nomination. The new advertisement focuses on Clinton’s record.

Clinton has broken from tradition in recent presidential races in which Democrats have generally avoided speaking about gun control. Beginning last year, Clinton made gun control a central part of her platform, arguing vehemently for universal background checks and vowing to “take on” the NRA.

The NRA ad is a volley in a fight that Clinton welcomes.

“The gun lobby is coming to Donald Trump’s defense and spending millions of dollars to spread lies about Hillary Clinton because they know Trump will always do their bidding,” said Clinton campaign spokesman Josh Schwerin. “The fact is, too many families in America have suffered—and continue to suffer—from gun violence and the vast majority of the American people – including the vast majority of gun owners – believe we can and must do better.

In past elections, Democrats made a show of their support for the Second Amendment. Then-Sen. John Kerry went hunting days before the 2004 presidential election, and in 2008 Clinton herself spoke fondly of the days she learned to shoot at her grandparents’ home in Pennsylvania.

The NRA has been outside force in American politics, particularly in local elections, where their support for gun rights candidates against Democrats or gun control candidates is often decisive. Former President Bill Clinton in 2001 famously attributed then-Vice President Al Gore’s loss to George W. Bush in part to the influence of the NRA in the general election. 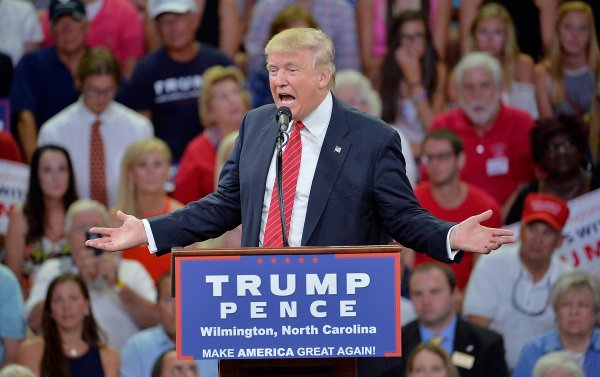