Former Republican presidential candidate Carly Fiorina speaks to the media in the spin room, after earlier in the week having endorsed Sen. Ted Cruz (R-TX), as she attends the CNN, Salem Media Group, The Washington Times Republican Presidential Primary Debate on the campus of the University of Miami on March 10, 2016 in Coral Gables, Florida.
Joe Raedle—2016 Getty Images
By Zeke J Miller

Former HP CEO and 2016 presidential contender Carly Fiorina is actively laying the groundwork for a bid to be the next chair of the Republican National Committee, according to state GOP officials who have followed her plans.

Fiorina and her aides have plotted an aggressive season of travel this fall to states with and without close Republicans races as she looks to help down-ballot Republicans, but people familiar with the plans said she is also looking to curry favor with the influential 168 members of the Republican National Committee. In phone calls and emails, Fiorina has reached out to party chairs across the country as well as RNC committee-men and -women who will elect a successor to incumbent RNC chairman Reince Priebus in January.

“The past few months Carly has been helping out with major races around the country, I know she is planning to reach out to your party chairman in the next week or so, just to touch base and see if there is any way she could be helpful to Republicans in the [Insert State or Territory] this Fall,” a Fiorina advisor wrote to multiple state party executive directors in recent weeks.

What elevated Fiorina’s travel from popular surrogate and fundraiser to that of RNC chair candidate, according to multiple RNC members, was her outreach to the U.S. territories, a particularly powerful voting bloc within the RNC but fall way down on the party’s priority list for the fall. Another source noted that the domains CarlyForChair.com and CarlyForRNC.com were both registered on July 14 at the same time.

The campaign for the chairmanship would be moot should Donald Trump win the White House, when custom dictates that the RNC defer to the wishes of the incumbent president. But Fiorina isn’t betting on a Trump win—in fact just the opposite. The noted Clinton critic has declined to formally endorse Trump, but has sought to burnish her spot in the conservative moment with frequent attacks on the Democratic nominee.

A failed California Senate candidate in 2010, Fiorina has served as the vice chair of the National Republican Senatorial Committee and chair of the American Conservative Union Foundation, which is affiliated with the annual Conservative Political Action Conference.

Fiorina has been searching for another act since her presidential candidacy made her a household name. After dropping out of the presidential race in February, Fiorina briefly joined Texas Sen. Ted Cruz as a running-mate as part of a last-ditch ploy before the Indiana primary. After Trump won the state, the pair ended their candidacy. But Fiorina reconstituted her campaign as an outside group to enable her to travel in support of GOP candidates across the country.

A Fiorina spokesperson would not comment on the former candidate’s future plans, but highlighted her travel to assist vulnerable Republicans.

RNC Chairman Reince Priebus, already the longest serving party chairman in his sixth year, declined to rule out seeking a fourth two-year term in an interview with TIME last month. But Preibus’ announcement has been viewed inside the RNC as an effort to contain speculation about his possible successors until after the Nov. 8 general election. In the interview with TIME, Priebus encouraged aspirants for his office to remain focused on the campaign at hand. 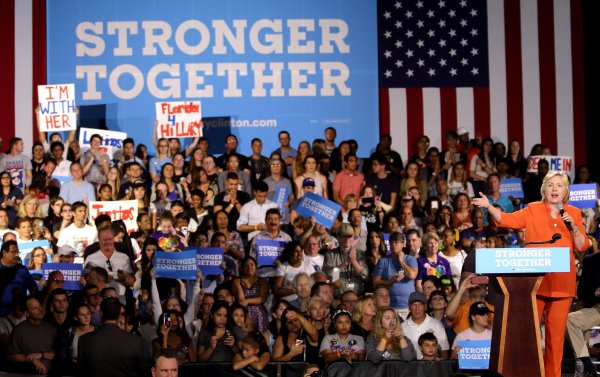