Donald Trump Says 'I Want to Debate Very Badly.' But He Has Conditions

Donald Trump said Tuesday that he will commit to three debates this fall with Democratic rival Hillary Clinton, but may try to re-negotiate the terms that have been agreed upon by a bipartisan commission.

“I will absolutely do three debates,” Trump told TIME in a phone interview. “I want to debate very badly. But I have to see the conditions.”

The Commission on Presidential Debates, a nonpartisan organization that has sponsored and produced general-election debates since the late 1980s, has scheduled three debates this fall: Sept. 26 in Hempstead, N.Y.; Oct. 9 in St. Louis; and Oct. 19 in Las Vegas. There is one vice-presidential debate on the docket, in Farmville, Va., on Oct. 4.

The dates and venues selected by the commission’s nonpartisan board were announced last September, and the format of each 90-minute debate has already been set. But the Republican nominee noted that he had haggled with television networks over the terms of debates held during the GOP primary and might do so again.

“I renegotiated the debates in the primaries, remember? They were making a fortune on them and they had us in for three and a half hours and I said that’s ridiculous,” Trump said. “I’m sure they’ll be open to any suggestions I have, because I think they’ll be very fair suggestions. But I haven’t [seen the conditions] yet. They’re actually presented to me tonight.”

Trump said he reserved the right to object to the commission’s choice of moderators, which have not yet been announced. The choice has stirred controversy before. In 2012, Republicans bristled after CNN’s Candy Crowley inserted herself into an exchange between Presidential Obama and Republican nominee Mitt Romney.

“I’ll have to see who the moderators are. Yeah, I would say that certain moderators would be unacceptable, absolutely,” Trump said. “I did very well in the debates on the primaries. According to the polls, I won all of them. So I look forward to the debates. But, yeah, I want to have fair moderators … I will demand fair moderators.”

A CPD official says it’s not uncommon for candidates to try to go around the system. The debates commission, a 501(c)3 organization, has sponsored every presidential debate since 1988. In 2000, George W. Bush’s campaign at one point suggested holding six debates, according to the CPD official, but suggested doing them in more casual formats, like Larry King Live or Meet the Press. The campaign ultimately relented.

“This needs to be done in the same way we’ve done this,” the CPD official told TIME. “There are fine points that get negotiated. If there is a strong preference about the set, that can be discussed,” the official added. For instance: “You want to do something that is respectful for candidates of different heights.” But the official said that the format as announced was non-negotiable.

Meanwhile, as first reported by Politico, CPD is preparing for the possibly of a third party joining the stage for the first time since 1992, telling debate sites to ensure their stages are sufficiently large enough to hold three podiums should a third candidate reach the 15 percent polling threshold next month.

Late in July, Trump sparked questions about whether he would participate in the debates when he said that he had received a letter from the National Football League that groused about the timing of the debates, two of which coincide with NFL broadcasts. An NFL spokesman disputed his claim, as the debates commission argued finding a date without any conflict is impossible, and that they sought to maximize the number of people who could watch the debates.

Clinton’s campaign said Monday that it had accepted the invitation to the debates, and tried to ratchet up the pressure on Trump to participate.

“Secretary Clinton looks forward to participating in all three presidential debates scheduled by the independent debate commission,” said campaign chairman John Podesta. “It is concerning that the Trump campaign is already engaged in shenanigans around these debates. It is not clear if he is trying to avoid debates, or merely toying with the press to create more drama. Either way, our campaign is not interested in playing along with a debate about debates or bargaining around them. The only issue now is whether Donald Trump is going to show up to debate at the date, times, places and formats set by the commission last year through a bipartisan process. We will accept the commission’s invitation and expect Donald Trump to do the same.” 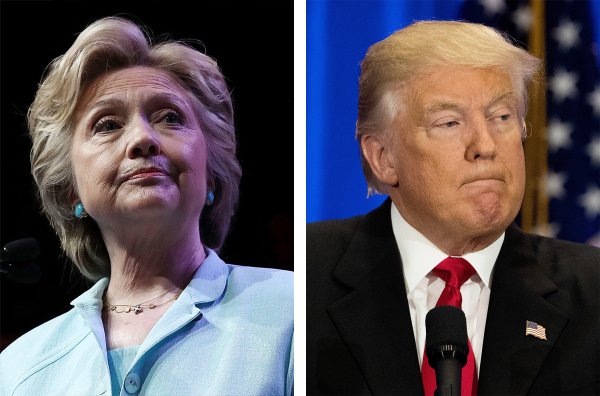