Sister Simone Campbell: What I Learned Touring America With Nuns on the Bus

In this age of the 24-hour news cycle, we must remind ourselves that America lives not at, but between, Republican and Democratic ideals. The “Nuns on the Bus,” as we are called, just returned from several weeks on the road (a lemonade stand in tow—it’s hot out there), traveling through the rust belt of the Midwest onto the industrial Northeast, looking for solutions to the gaps Americans face.

For Angie Whitman, the major gap is transportation. In Jefferson City, Missouri’s state capital, she told us that can’t get home from work because buses run from 8 a.m. to 5 p.m. Monday through Friday, and she works until 11 p.m. When she’s too tired to walk the four miles, she takes a taxi, which leaves her begging for overtime so she can pay for it. She relocated from Ferguson, Mo., to get away from violence there only to encounter another gap—housing. She now lives in public housing for the first time in her life because it’s all she can afford. The housing is in the city center, but the jobs are on the outskirts.

We heard about housing and transportation gaps a lot. Transportation between city centers where lower income people often live and the outer ring where they often need to work and shop is a problem in many places—from Terre Haute and Ft. Wayne, In., to Erie, Pa., and Buffalo, N.Y. In Buffalo the transit drivers say they haven’t had a raise in seven years. At $13.25/hour, they’re barely above minimum wage.

Missouri is also one of 19 states that has not expanded Medicaid to cover low-income workers under the Affordable Care Act. For Angie, who is in her early 40s and has high blood pressure, this healthcare gap forces a stressful choice between her medicine and rent. Last month she chose her medicine, hoping she can earn enough in time to pay her rent before the end of the month.

Caring for kids is another gap many people talked about. In Concord, N.H., I talked with Amy Shaw on the steps of the state’s capital. Even with a Master’s degree in social work, she can’t afford to work. She’s staying home to care for their three kids while her husband works two jobs; yet they still can’t make ends meet. Nor can the childcare worker I met there, Jennifer Cole, who barely makes minimum wage.

Racism is another gap that is tearing the fabric of America. While in Concord, I was so touched by a blessedly intelligent, biracial 20-year-old Jazmine Langley a Bill Gates Millennium Scholar who was awarded a full college scholarship. She should have so much hope for her future, yet she spoke with such anguish about friends facing racism, including one whose father was killed by police. Only off-handedly, at the end of our conversation, did she add: “I can’t tell you the number of times I’ve been stopped in my car for nothing—just because I’m black.” She keeps her student ID on top of her driver’s license and a college sticker on car. Not out of school pride, but for safety.

During our tour, we didn’t just ask about the gaps communities faced. We also asked about what would give them hope.

Something encouraging happened as Nuns on the Bus wandered its way through the streets of America, gathering each evening with folks to hear how they might mend the gaps across the American divide: tax injustice, living wage, family-friendly workplaces, and access to democracy, healthcare, citizenship and housing. The light bulb went on as people began to see how the gap they face is integrated with the gap faced by someone else.

In Toledo, Ohio, when the Farm Labor Organizing Committee (FLOC), was helping train Hispanic high school students in community organizing, the “FLOC Homies” reached out to the city’s African-American students to negotiate protocols with the Toledo Police Department to improve relations.

When two students, Billie and Genesis, discovered that ten of the young women in just their one high school class had been sexually harassed or assaulted, these “FLOC girls” found a private foundation to fund a counselor, and they met with the Toledo school board and persuaded them to post phone numbers in school restrooms to report molestations. They united and mended that gap.

In Fort Wayne, I visited a wonderful parish program called Vincent Village, which helps move families of all colors from shelters to transitional and permanent housing. Four women here—three black and one white—told me that the program helped them discover something important: their dignity. I was reminded that so often we focus on the task but neglect the dignity and value of the person.

In Erie, Pa., our evening roundtable was a bubbling with possibility. We’d heard too many stories that day about crime, poverty and lost jobs. But that evening, talking to their neighbors about mending their gaps replaced depression with hope, and by the end people were exchanging phone numbers and promises to stay connected.

It became clear that so many Americans living in between Republican and Democrat divides are tired of the divisions being sown. Many are ready to work together to help sew the fabric of our society back together.

And that’s what gives me hope for our nation. Reweaving fabric doesn’t just stitch it back together, it makes it stronger. 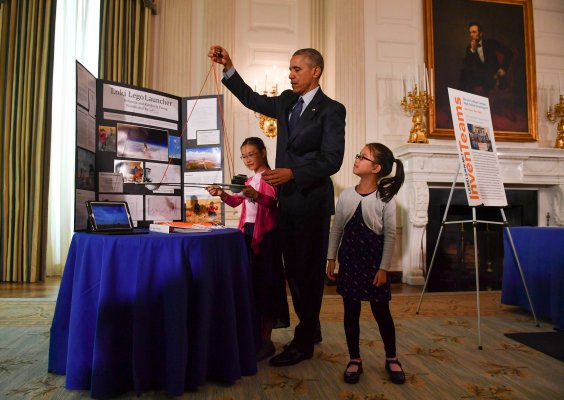 Scientists Want to Know What Clinton, Trump Think
Next Up: Editor's Pick