How Hillary Clinton is Preparing for the Debates

If you only read one thing: Hillary Clinton’s campaign accepted the Commission on Presidential Debates’ invitation to participate in three scheduled bouts this fall, the first on September 26 at Hofstra University on Long Island. In a public statement, the campaign then toyed with Donald Trump’s criticism of the debate schedule, suggesting he was trying to avoid the contests, before calling on him to commit to attending. Clinton’s early confidence aside, the debates stand as one of the greatest wildcards outstanding in this campaign, with the unpredictable Trump facing the very predictable Clinton, fireworks are assured. According to Clinton aides, they are essentially burdened with preparing for multiple debates with whichever Donald Trump shows up, whether the bombastic bomb-thrower, the subdued school-boy, or someone in between. Trump, meanwhile, has done little thinking about the debates, save for complaining about their conflict with football games. While he debated a dozen times in the primaries, he has never debated one-on-one with a candidate. Through all of the last year he played his rivals off each other, but this will be a very different format that won’t allow him to fade into the background as he has in debates past. Tens of millions of voters will tune in, and what transpires will almost certainly shift votes.

Donald Trump displayed the sort of discipline Republican leaders have been looking to see for months Monday as he withstood more than a dozen protestors at his economic speech in Detroit and stayed on message. His campaign was so proud it sent out a fundraising email trumpeting just that. But it was only one day. Trump is back to holding rallies today, and that will be the real test of whether he is ready to put that last two weeks behind him. On Twitter Monday evening, it appeared Trump wanted to keep some of the controversy alive, as he suggested without evidence—claiming “many people are saying”—that the execution of an Iranian scientist who provided information to U.S. intelligence was related to Hillary Clinton’s emails.

Clinton’s campaign is considering expanding the map of states it is devoting general election resources to, both as it sees firming in its position in Colorado and Virginia and as it looks to pick up vulnerable Republican Senate seats in the event of a wave election in November.

Clinton is sued by the parents of Benghazi victims. Another GOP senator says she can’t back Trump. And Trump’s tax math faces scrutiny.

Trump Embraces Fundraising, Not Transparency
The GOP nominee is closing the money gap with Clinton, but he won’t name the bundlers helping him do it [Politico]

“The Obama-Clinton agenda of tax, spend and regulate has created a silent nation of jobless Americans.” — Donald Trump in his economic address Monday in Detroit

“The only issue now is whether Donald Trump is going to show up to debate at the date, times, places and formats set by the commission last year through a bipartisan process. We will accept the commission’s invitation and expect Donald Trump to do the same.” — Clinton campaign chairman John Podesta in a statement Monday

In Miami, Clinton to call on Congress to act on Zika virus [Associated Press]

Sen. Marco Rubio Says Pregnant Women With Zika Should Not Get Abortions [TIME]

Trump Tax Plan Seen as Boon for Rich, Question Mark for Others [Bloomberg] 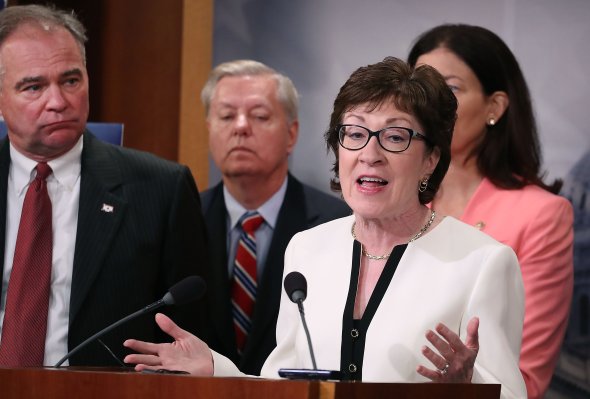 Republican Sen. Susan Collins Says She Will Not Vote for Donald Trump
Next Up: Editor's Pick