RIO DE JANEIRO — Each night at the Aquatics Stadium brings new tests for Team USA, which has 30 first-time Olympians on its 45-swimmer roster. On Monday, with Michael Phelps and Katie Ledecky competing only in semifinals, seven of the eight Americans racing for medals were rookies who had never swum in an Olympic final before. Five of them earned spots on the podium, as did the one non-rookie.

Two of the newbies, Ryan Murphy and David Plummer, took to the pool in hopes of extending the U.S. streak of five straight gold medals in the 100-meter backstroke. Murphy, 21, who swims for Cal, has long been touted as America’s next backstroke hope. Plummer, a Wayzata, Minn., high school coach and father of two, is by contrast a career grinder; at 30 he is the oldest first-time Olympic swimmer in U.S. history.

They took to the blocks as the two fastest qualifiers ahead of world champion and pre-Games favorite Mitch Larkin of Australia. Larkin jumped to the lead in the first 50 meters of the final, but the smooth-stroking Murphy edged past him coming home and won the gold in 51.97, the second-fastest time ever, just .03 off retired U.S. swimmer Aaron Piersol’s 2009 world record. As Larkin faded, China’s Xu Jiayu moved up for the silver and Plummer claimed the bronze.

Murphy’s win stretched Team USA’s 100-backstroke gold streak to six, the U.S.’s longest in any individual Olympic swimming event. It also may have heralded a new era in American backstroking. Before the Olympics, Piersol, Murphy’s idol and a three-time individual gold medalist, texted Murphy to encourage him to rise to the moment and continue the tradition of U.S. Olympic backstroke dominance. The message stuck. Murphy will now attempt to add two more golds, in the 200 back (a win that would extend the U.S. gold-medal streak to six in that event as well) and the 400-medley relay, which Team USA has never lost at an Olympics.

The young Americans have already proven to have a brash streak to go with their talent. On Sunday Lilly King, 19, a native Indianan and IU sophomore, trashed her main rival for gold in the women’s 100-meter breaststroke, Russia’s Yulia Efimova, who was cleared to compete in Rio despite having served a 16-month doping suspension from 2013 to 2015 and testing positive for a newly banned performance enhancer this year (the latter result is on hold while anti-doping experts further study the substance, a heart drug called meldonium). After Efimova held up an index finger in celebration of her Sunday semifinal win, King, watching a TV monitor, directed a Dikembe Mutombo-style no-no finger wag at the screen and made the gesture again in the pool after winning the second semifinal. She later told NBC of Efimova, “You’re shaking your finger No. 1 and you’ve just been caught for drug cheating. I’m just not a fan.”

In Monday’s 100-breast final, spectators echoed King’s sentiment, showering Efimova with boos when she was introduced. King took the lead from the start, with teammate Katie Meili, yet another Olympic rookie, turning for home behind her in second. Efimova made a run at King over the final 50, but King dug down and fought her off. King reached the wall in 1:04.93, the fourth-fastest time ever, with Efimova second and Meili, a 25-year-old Texan with a psychology degree from Columbia, third. King had proven her toughness in and out of the pool. “I’m not the sweet little girl,” she told reporters on Sunday. “That’s not who I am.”

Some of these U.S. rookies have weathered adversity. Backstroker Kathleen Baker, 19, who trains in Charlotte when not attending Cal, has suffered from Crohn’s disease for the last seven years. That chronic condition, in which the body attacks healthy cells in the gastrointestinal tract, can cause severe pain and inflammation, appetite loss, exhaustion and other debilitating symptoms, and Baker describes learning of her diagnosis at age 12 as the worst day of her life.

She has managed her Crohn’s through an ever-evolving variety of treatments (which have included transfusions and twice-a-day abdominal injections) and on Monday night she became a symbol of hope for all who suffer from the disease. Entering the 100-back final as the fastest qualifier (thanks to a lifetime best of 58.84 in the semis), Baker raced side-by-side with the event’s most intimidating figure, Hungary’s Katinka Hosszu, the four-time Olympian and self-styled Iron Lady, who smashed the world record in the 400 individual medley on Saturday.

Heading into the last 50 meters, pre-Olympic favorite Emily Seebohm of Australia was leading in a far outside lane, with Baker just .05 behind. But in the final half-lap Hosszu found a higher gear and passed both, touching the wall in 58.45 (the fifth-fastest time ever), with Baker second in a personal best of 58.75. An hour later, Hosszu returned to the pool to win her semifinal in the 200 IM in 2:08.13. She is the favorite to win her third gold of the Games in that event on Tuesday night.

Hosszu was a reminder that even with new faces breaking through and Phelps and Ledecky in the lineup, the U.S. does not dominate as it once did. Phelps qualified only fifth in the afternoon 200-butterfly heats and second in the evening semis behind rising Hungarian star Tamas Kenderesi, who’s just 19. Even the seemingly unstoppable Ledecky had to settle for the second-fastest qualifying time in the 200-free semis behind her top rival in the event, Sweden’s Sarah Sjostrom.

The men’s 200 free in turn belonged to China’s Sun Yang, who powered home in the final 50 meters to overtake France’s Chad le Clos and win in 1:44.65. Conor Dwyer, a 27-year-old Florida grad who was the only Olympic veteran representing the U.S. in Monday’s finals, took the bronze behind le Clos.

Sun, a double gold-medalist in London, had sobbed inconsolably on opening night after finishing second to Australia’s Mack Horton in the 400 free. Now he was jubilant, even tossing his cap into the stands. His win set the stage for a showdown in this Saturday’s 1,500 free with Horton, who dissed Sun as a drug cheat after the 400 because Sun served a three-month doping ban in 2014 for using a banned stimulant. Sun responded by declaring himself “the king” of the 1,500. Game on. 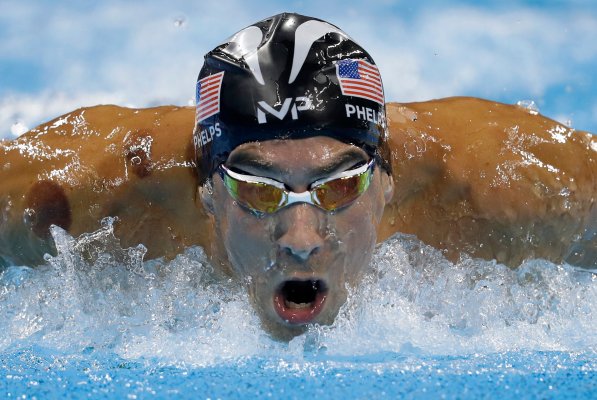 Michael Phelps Terrifies Twitter with His Game Face
Next Up: Editor's Pick