Review: 'No Man's Sky' Isn't What You Wanted. Thank God

I’m cruising through amaranth-tinged vacuum in a dangerously vulnerable starship. Asteroids phase in and out of view, each a lumpen mass my photon cannons can smash into space fuel. A pack of capital ships warps into view like some cosmic rabbit-from-a-hat trick. In the distance, a “distress signal” beckons as pirates needle a flock of lumbering freighters like interstellar bees. Should I join the fray? On whose side? Should I instead make for a nearby moon to scavenge resources? Or a distant “space anomaly” that’s been vying for my attention?

Read TIME’s piece on the creation of No Man’s Sky.

This is Hello Games’ audacious No Man’s Sky, out for PlayStation 4 August 9 and PC August 12. Whether it measures up to years of anticipation depends how closely you paid attention to Hello Games’ original promise: that it was cobbling together a kind of Zen zoology simulator framed by freeform exploration of procedurally generated planets with bouts of action-angled interstellar combat thrown in. Not scientifically rigorous (though very much science-informed), and definitely not a Space Sim to Rule All Space Sims. But that’s okay, because it turns out “freeform zoology thingy with gorgeous vistas” is enough, and at times, sublimely more.

Here’s how it works: Everyone starts at the edge of the universe on a unique planet beside a crashed spaceship. This is the screw your courage to the sticking place part, as you’re assaulted by atmospherics like temperature, toxicity and radiation—more so if you’ve lucked into somewhere truly noxious. To get the spaceship working, you have to probe for resources using a jetpack (it gets you out of holes and softens drops) and a “multi-tool”—a sort of space-age Swiss Army Knife that doubles as a blaster. Both your spacesuit and ship need infusions of elements like Carbon, Plutonium and Thamium9, and their scarcity or plentifulness is determined by a planet’s proximity to its sun—another indication of how science-nerdy the Hello Games folks are.

Repair your ship by alchemizing the right materials and you can lift off through the clouds and into space, all of it as loading-screen-free as teased in those early videos. From orbit you can leap to other planets or dock at space stations to trade with other species. Or become a space pirate. Or fashion yourself as an intergalactic Claude Lévi-Strauss. It’s a cosmic carte blanche.

The big gameplay complication is that your suit and ship have limited storage slots, so inventory management and supply-demand savvy become crucial. Along the way you’ll unlock “recipes” that let you craft upgrades to your suit, ship or multi-tool, and occasionally chance on cosmic artifacts that tease different pathed backstories or teach you new words in alien vocabularies. It’s a classic extract-barter-upgrade loop.

But—and this is where the game’s virtues become more abstract—it’s also about reveling in the outlandish things the universe-generation algorithm lobs at you. Like creepy, towering creatures with lobster eye-stalks and skittering spider legs, or a cavern full of exotic multi-hued flora and dancing luminescent motes, or a sunset so psychedelic and stirring you can’t help but stop to watch. If Minecraft is a procedural game about refining and reorganizing distributed bits of information—all those cubes of dirt and rock and ore into recognizable objects and structures and mechanisms—then No Man’s Sky is a procedural game about instead cataloguing all that procedural output while enjoying the five-star views.

A game this unstructured just goes to show you no two or 10 (or who knows how many) players are going to approach it the same way, or for the same reasons. Someone landed a copy a week early, then decided to race as fast as possible to the center (there’s a mystery there, if you’re up to it) as a way of testing claims about the game’s capaciousness. That’s one way to do it, like speed-reading a Kim Stanley Robinson novel, or winning a hot dog eating contest. Another might be what I’ve been up to during my first day with the game, just ambling around a handful of planets—discovered and named after my children—in nearby solar systems. When you think about how technically vast this game is, that’s like saying you spent a day in contemplation of two or three grains of sand.

But we’ve known all along that No Man’s Sky mathematical grandeur masks a universe that’s idiosyncratic only to a point. There are no grand civilizations sequestered somewhere in this galaxy with Turing Test-passable aliens waiting to wow us with riveting conversation. You’ll never get to square off against other players in frenzied dogfights, or even meet up with friends for an adventure. That No Man’s Sky only gins up content when you’re paying attention to it is poetically solipsistic: It’s literally only about you.

The point is that you only notice that sameness in small ways, because all you’ll ever see is a microscopic fraction of the output. If two or three planets can devour hours, imagine trying to visit half a million or more—a blip against the total upwards of 18 quintillion. No one’s going to come close. So in playing No Man’s Sky, you wind up thinking less about its theoretical size than what it feels like to navigate from one planet to the next, or between systems and on to galaxies, whether following the tendrils of optional story beats, or exploring for the pleasure of exploration alone.

I was worried the game might lose me for the inverse of all the reasons a game like Minecraft has yet to bore me. Yes, the universe isn’t random, and yes, it’s all extrapolated from a nucleus of elegant mathematics in a way that boggles the mind. But randomness was never the issue. The problem with exploration-driven gameplay at this scale is over-generalization, and you’ll notice it straight off in No Man’s Sky: Alien outposts laid out the same on every planet; diplomatic chitchats that draw from a shallow pool of conversational possibilities; geometrically unique but interactively homogenous creatures that wander about in the same aimless ways.

But a lot of people bounce playing Minecraft because they’re looking for a game it’s not trying to be. Just because hunks of half-chopped trees hang in the air defying Newtonian physics doesn’t mean Minecraft has a gravity problem. Likewise, No Man’s Sky‘s algorithmic seams feel like red herrings for players looking for something Hello Games never set out to make: not a game that trots out surprise after surprise, but one that equips you with the tools to surprise yourself.

Maybe it was the time I chose to swap ships without a part needed to craft warp cells, stranding me in a system on a mystery-hunt across half a dozen moons and planets. Or the space pirates that chased me down from orbit to dogfight planet-side as a blood-red sun dropped over cerulean waters. Or the time I spent a full play session trying to line myself up just to see a solar eclipse. Whatever the anecdote, it’s felt organic, enthralling and entirely earned.

What would finishing a game like this look like? Collect enough space bucks to buy the coolest ship or spacesuit? Unlock every achievement? Unearth some Ambrose Bierce twist, where it turns out the whole thing’s an elaborate simulation? (Which, technically speaking, a procedurally generated universe already is, right?)

Who knows. I’ve poured hundreds of hours into Minecraft and I’ve yet to visit “The End” or slay the Ender Dragon. Our ideas of what it means to play much less “finish” games like this look increasingly like scatter charts. Even if a hundred or more hours from now No Man’s Sky wears out its welcome, I’ll be grateful and still somewhat awestruck by what a tiny team of developers rejiggering decades-old design ideas managed to pull off. 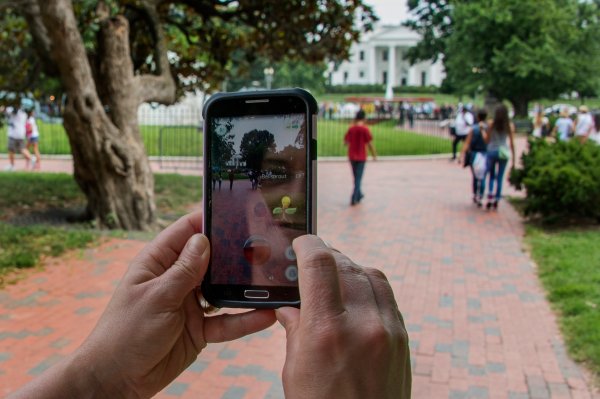 Pokémon Go Is Easier To Play in Affluent, White Neighborhoods, Report Finds
Next Up: Editor's Pick