Kohei Uchimura, the reigning Olympic and world men’s all-around champion, delivered another piece of history for the Japanese men’s gymnastics team on Monday afternoon as the team captured its first Olympic gold medal since 2004 with a score of 274.094. This is Japan’s second-straight global title after winning the team event at the 2015 world championships.

Russia took silver, despite some jeers from the audience, with 271.094 points, winning their first medal since 2000 and China took bronze with 271.122 points. The United States finished fifth, just like at the London Games, putting up a point total of 268.560.

Uchimura got the Japanese team off to a great start, nailing his pommel horse routine for 15.100 points and then delivered a 15.566 in the vault. However, his most crucial contribution of the afternoon came in the final rotation with Japan and Russia on the floor exercise and China on the high bar—the three countries held the top three spots, separated by less than .8 of a point. Two-time World champion Kenzo Shirai led off the final rotation for Japan with a 16.133 on the floor, which pretty much sealed the team title. Ryohei Kato (15.466) and Uchimura (15.600) added to the 274.094 total, which was too much for China and Russia to beat.

Here are some quick thoughts from Monday’s action:

The team didn’t get off to the best start as Alex Naddour fell and Sam Mikulak went out of bounds twice on the floor exercise. Jake Dalton was the lone American to crack 15.000—he concluded his event by flexing and screaming “let’s go!” even though the U.S. was in last place after the first rotation. The cry wouldn’t be answered until the second half of the evening.

The pommel horse was a problem for American men in 2012 and it continued to be their Achilles’ heel in Rio. Danell Leyva and Naddour both suffered from weak dismounts, which resulted in point deductions. Mikulak scored a 14.733, the highest of the Americans, despite several knee bends.

However, the Americans found their footing in the fourth rotation on the vault; Mikulak put up a 15.466, the highest score of the evening, to help the U.S. climb into sixth place, and the energy remained high as Team USA posted a 46.333 on the parallel bars. Their medal chances were slim heading into the final event, the high bar, but a fall by Leyva on the high bar drove the final nail into the coffin.

The United States men’s team still has its work to do, as they remain medal-less for a second-straight Olympics.

Ukraine was in last place after the second rotation and they essentially waving the white flag by scratching an athlete on the parallel bars, high bar and floor exercise and taking zeroes in those events. Initially, many wondered if injuries were the cause, but Ukraine made no effort to send out another athlete to these events. Maksym Semiankiv went as far as to jump up and hang on the high bar, drop and salute the judges. As expected, they finished last, putting up a 202.078 point total.

Reports say that Ukraine planned to do this, that they were using the team event to practice for the all-around—Oleg Verniaiev was the top scorer in qualifying, 1.466 ahead of Uchimura.

Not many are happy about Ukraine’s lack of effort, especially given their situation four years ago, when they were on track to take bronze in the team competition but a score inquiry by Japan bumped them into the silver medal spot behind China. Great Britain moved down to bronze and Ukraine was out of the medals. So much for Ukrainian revenge on 2012.

Brazilians rallied on and off the floor

Diego Hypolito and the Brazilian men put up a thrilling performance in front of their home crowd, but finished sixth in their first-ever appearance in an Olympic all-around team final with 263.728 points. The arena, drizzled with green and gold, rang with the cheers of “Bra-zil! Bra-zil! Bra-zil!” and “Di-e-go! Di-e-go! Di-e-go!” throughout the competition.

What’s next for Uchimura?

On Wednesday, Uchimura will compete in the men’s all-around final as he looks to become the first man since Japan’s Sawao Kato in 1972 to win successive Olympic all around titles. The final will be contested at 3 p.m. ET and features 24-men including Americans Mikulak and Chris Brooks. 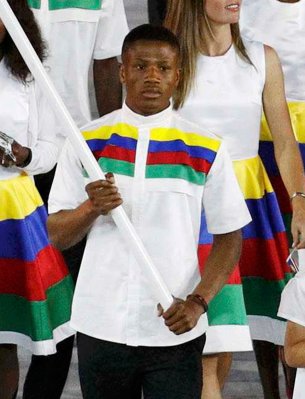 Another Boxer Arrested for Alleged Sexual Assault at Rio Olympics
Next Up: Editor's Pick