What Donald Trump Got Wrong About Unemployment

In his speech on the economy Monday, Republican presidential nominee Donald Trump touched on one of his favorite topics: the supposedly huge number of Americans who don’t have a job.

Lamenting “a silent nation of jobless Americans,” Trump rattled off a string of well-worn statistics that he’s also cited in stump speeches and interviews.

“Fifty-eight percent of African-American youth are either outside the labor force or not employed. One in five American households do not have a single member in the labor force. These are the real unemployment numbers,” he said. “The five percent figure is one of the biggest hoaxes in American modern politics.”

Trump’s numbers are meant to paint the American economy in a bad light. But they don’t back up the story he’s telling. Rather, they paint a portrait of how American demographics are changing.

Trump is correct that fewer Americans, as a percentage of the total population, are engaged in traditional employment today. But that’s not proof that Americans are unemployed, by any traditional measure, or even underemployed. It’s evidence that the Baby Boomer generation—a massive hunk of American labor force—is currently retiring, while the next-largest generation, the Millennials, has yet to start working en masse.

Many Millennials, born between about 1980 and 1995, are still in college or graduate school, taking care of young children or otherwise not fully engaged in the labor force yet.

Trump’s claim that one-in-five American households “do not have a single member in the labor force” is also therefore not a reflection of employment problems so much as it’s a recognition that 20% of American households are headed by retirees. Your 85-year-old grandfather and his 82-year-old wife aren’t participating in the labor force—and that’s probably a good thing.

Trump’s claim that the unemployment rate, which was 4.9% in July, is a “hoax” is problematic for the same reasons: He’s measuring the wrong thing.

Trump’s line of argument, which dates back at least to the 1960s, is that the Bureau of Labor Statistics doesn’t accurately include people who have given up looking for work. But, again, the demographics of the American population tell a different story.

While it’s true that roughly 42%, or 93 million, Americans don’t have jobs, most of that population is made up of teenagers, retirees, or stay-at-home caregivers. According to federal statistics, there are roughly 46 million Americans aged 60 and up and 10 million American teenagers. While the number of full-time caregivers is less firm, a 2015 AARP study found that roughly 34 million Americans provided care in the past 12 months to an elderly person. Nearly 25% of Americans, mostly women, are full-time stay-at-home parents, according to U.S. Census data.

Seventy-one percent of 16- and 17-year-olds don’t have a job; 92% of people over 75-years-old are “unemployed” too by that same measure. (The federal government includes children as young as 16 in the labor force statistics; small children and junior high school students aren’t included in anyone’s calculations.)

In other words, including grandma, your 16-year-old cousin, and a stay-at-home mom among the ranks of the “unemployed” might be technically accurate—they aren’t participating in the traditional workforce—but it doesn’t tell us anything interesting about the state of the U.S. economy.

Trump claim Monday that 58% of African-American youth are “either outside the labor force or not employed” makes a similar statistical mistake: it includes all African-Americans, beginning at 16 years old, who are in high school, college, graduate school, or otherwise voluntarily out of the workforce. The real unemployment rate for African Americans 16 to 19 years old is closer to 31.8%, which is much higher than it should be, but hardly pushing 60%.

By focusing on these sorts of statistics, Trump misses an opportunity to address the more immediate concerns that many his supporters—particularly white, working class Americans—are experiencing today. Many in his base are legitimately frustrated with the current economy: wages are growing painfully slowly; service jobs are less lucrative than the union-backed factory and mining jobs of a generation ago; and health care, child care, and education are vastly more costly today, as a percentage of income, than they were three decades ago. Those are all issues that many working class Americans feel in their bones.

But the numbers Trump used Monday don’t tell that story.

Correction: The original version of this story misstated the unemployment rate in July 2016. It was 4.9%. 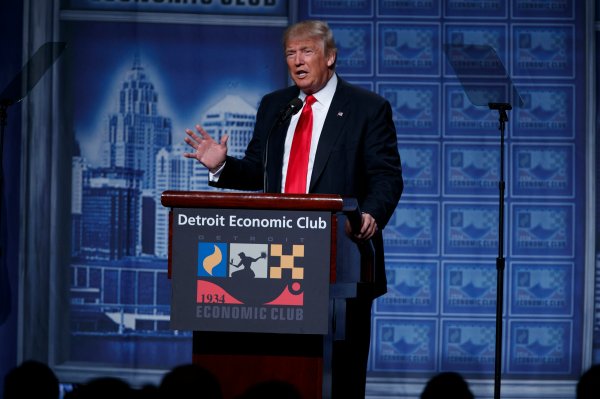