Why You Should Embrace Your Darker Emotions

David is the author of Emotional Agility

The count will vary depending on which expert you ask, but for our purposes, let’s say there are seven basic emotions: joy, anger, sadness, fear, surprise, contempt and disgust. All these emotions are still with us because they’ve helped us survive through several million years of evolution. And yet five of them—anger, sadness, fear, contempt and disgust—are clearly on the not-so-comfortable end of the affective spectrum. (“Surprise” can go either way.)

What does it mean that most of our emotions reflect the dark side of human experience? If so many of our emotions are troubling, and yet helpful enough to make the cut of natural selection, doesn’t that mean that even the dark and difficult feelings have a purpose? Is that why we shouldn’t try to avoid them but rather should accept them as a useful—though sometimes uncomfortable—part of our lives?

Yes. Precisely. But learning to accept and live with all our emotions is by no means what most of us do. Most of us use default behaviors that we hope can deflect or disguise our negative feelings so we won’t have to face them. Others settle deeply into these feelings and struggle to get beyond them. Or we attempt to cope with difficult times and difficult emotions through cynicism, irony or gallows humor, refusing to admit that anything is worth taking seriously. (But as Nietzsche said, loosely translated, “A joke is an epitaph for an emotion.”) Others try to ignore their feelings and, like that more contemporary philosopher Taylor Swift said, “shake it off.”

When we try to “unhook” simply by killing off our feelings, the real victim is our own well-being. Here are two types of responses to negative emotions—and a suggestion for what to do instead.

Bottlers try to unhook by pushing emotions to the side and getting on with things. They’re likely to shove away unwanted feelings because those feelings are uncomfortable or distracting, or because they think that being anything less than bright and chipper is a sign of weakness, or a surefire way to alienate those around them.

If you’re a bottler who hates work, you might try to rationalize away your negative feelings by telling yourself, “At least I’ve got a job.” If you’re unhappy in your relationship, you might immerse yourself in a project that just has to get done. If you’re losing yourself in the busyness of caring for others, you might push your sadness or stress aside by reminding yourself that your “time will come.” If you’re leading team members who are deeply anxious about budget cuts and proposed restructuring, you might tiptoe around those subjects for fear of opening up an emotional can of worms.

Even with the important caveat that people don’t always behave according to the gender norms found in research, men are more likely to bottle than women are.

The problem with bottling is that ignoring troubling emotions doesn’t get at the root of whatever is causing them.

More than once, I’ve met bottlers who find themselves, years later,in the same miserable job, relationship or circumstance. They’ve been so focused on pushing forward that they haven’t been in touch with a real emotion in years, which precludes any sort of real change or growth.

Another aspect of bottling behavior is trying to think positively, to push the negative thoughts out of your head. Unfortunately, trying not to do something takes a surprising amount of mental bandwidth. And research shows that attempting to minimize or ignore thoughts and emotions only serves to amplify them.

Bottling is usually done with the best intentions, and to the practical person it does feel productive. “Think positive,” “forge forward,” and “get on with it,” we tell ourselves. And poof, just like that, the unwanted emotions seem to vanish. But really they’ve just gone underground—ready to pop back up at any time, and usually with surprising and inappropriate intensity ginned up by the containment pressure they’ve been under.

When hooked by emotionally uncomfortable feelings, brooders stew in their misery, endlessly stirring the pot around, and around, and around. Brooders can’t let go, and they struggle to compartmentalize as they obsess over a hurt, a perceived failure, a shortcoming or an anxiety. Unlike bottlers, brooders are more likely to be women.

Brooding is a cousin of worry. Both are intensely self-focused, and both involve trying to inhabit a moment that’s not now. But while worry looks forward, brooding looks back—an even more pointless exercise. Brooders lose perspective as molehills become mountains, and slights become capital crimes.

But brooders are ahead of bottlers in one respect: In their attempt to solve their problems, brooders are at least “feeling their feelings”—meaning, aware of their emotions. While brooders may not be in danger of emotional leakage, though, they might drown in a flood. When you brood, your emotions don’t gain strength by being pressurized in a bottle, but they do gain strength. With brooders, emotions become more powerful in the same way a hurricane does, circling and circling and picking up more energy with each pass.

Like bottlers, brooders usually have the best of intentions. Ruminating on uncomfortable feelings offers a comforting illusion of conscientious effort. We want to deal with our unhappiness or to learn how to cope with a difficult situation, so we think it through—then think, and think, and think some more. At the end, we are no closer to resolving the issue at the core of our distress.

Brooding also makes you more likely to blame yourself with questions such as “Why do I always react like this?” and “Why can’t I handle this better?” Like bottling, it takes up massive amounts of intellectual energy. It’s exhausting and unproductive.

What to Do Instead

Whatever we may think we’re accomplishing by bottling or brooding, neither strategy serves our health or our happiness. When we don’t go directly to the source, we miss the ability to really deal once and for all with what’s causing our distress.

If I held a stack of books away from my body, with my arms straight out in front of me, I’d be OK for a few minutes. But after two minutes … three minutes … 10 minutes, my muscles would begin to shake. This is what happens when we bottle. Trying to keep things at a stiff arm’s length can be exhausting. So exhausting, in fact, that we often drop the load.

But when I hold the books tight to my body, hugging them as if to crush them, my arm muscles will also begin to shake. In this position, my arms and hands are clenched—closed and unable to use to do anything else. This is what happens to us when we brood.

In both cases, we lose our ability to be fully engaged with the world around us: to hug our children, to be present with a colleague, to create something new, or to simply enjoy the smell of the newly mowed grass. Openness and enthusiasm are replaced by rules, confining stories from the past, and invidious judgments, and our ability to solve problems and make decisions actually declines. These rigid postures stop us from being agile when we need to deal with life’s stressors.

Of course, sometimes these coping strategies may be the best course of action. It’s when these methods are used as default coping methods, as they often are, that they become counterproductive and actually embed the hooks deeper and deeper. 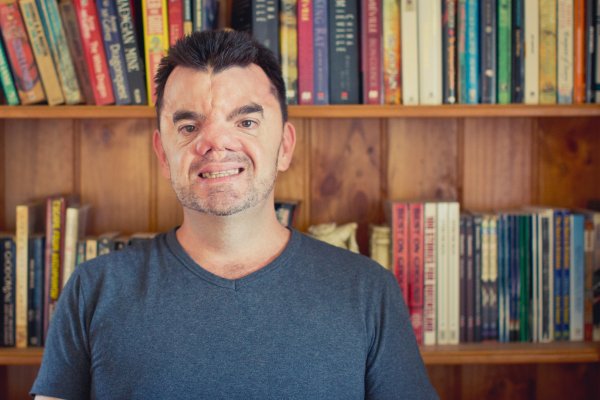 5 Things I’ve Learned From Being 'Ugly'
Next Up: Editor's Pick