Syrian Rebels Said to Break Through Siege on Aleppo

Syrian opposition forces pushed through pro-regime lines in the northern city of Aleppo on Saturday, breaking a potentially disastrous siege of the rebel-held half of the city.

A coalition of armed groups in the city attacked a military academy and rejoined rebel fighters battling from the other side. The victory prompted crowds of cheering people in the streets of eastern Aleppo, which has been under siege since June when the last road into the city was cut by pro-regime forces. Syrian state media denied the opposition breakthrough, with the official news agency SANA reporting on Sunday that “fierce battles” were ongoing in the city.

The breaking of the siege was an improbable reversal of the tide in the long battle for Aleppo, which was once Syria’s largest city and remains a central front in the country’s five-year-old civil war. Only days earlier, residents had been hunkering down for a long siege that could have led to a humanitarian crisis and crippled the opposition in its most important stronghold.

Arrayed against the opposition fighters are the forces loyal to the regime of President Bashar Assad, Lebanese Hizballah militants and the Russian air force. The establishment of a corridor into Aleppo, where an estimated 300,000 people still live, preserves for the moment the survival of the opposition enclave.

“It’s a big slap in the face of the regime and allied militia forces,” said Assaad al-Achi, the director of Baytna Syria, an institution working with civil society groups. “They’ve been working for two years and half to besiege the city, since May 2014, and in six days when all the armed groups came together they managed to break the siege again.”

Less than a day after rebel fighters broke through, aid arrived in the form of at least one truck carrying food that was driven by civilians from neighboring Idlib province, according to al-Achi and a doctor in Aleppo.

The siege imposed on eastern Aleppo in June appears to have compelled rebel groups into an alliance capable of overcoming pro-government forces. The jihadist group Jabhat Fateh al-Sham played a central role in the opposition coalition that launched the Aleppo offensive about a week ago.

Jabhat Fateh al-Sham is the new incarnation of Jabhat al-Nusra, the Syrian branch of al-Qaeda. The group announced a split with al-Qaeda that appeared calculated to avoid U.S. air strikes and enable the group to form closer alliances with more moderate rebel groups. The jihadist group’s growing influence in the current rebel coalition has unnerved some mainstream Syrian opposition groups who oppose their hard-line platform.

The lifeline opened into Aleppo remains a tenuous one, with concerns that pro-regime and Russian forces will strike back with overwhelming force. Russia intervened in Syria’s war in September 2015 with a campaign of air strikes that bolstered Assad’s campaign to reclaim parts of the country lost to the rebellion and to jihadist groups, including ISIS.

“What remains to be seen as well is how the Russians will react to this,” Achi added. “Are they going to consider twice what they’re doing in northern Syria, or are they going to simply go full force with their ambition to completely destroy the moderate opposition.” 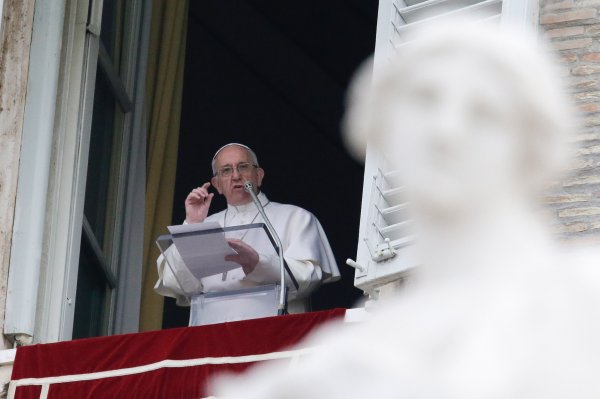 Pope: It's 'Unacceptable' That Children Die in Syria's War
Next Up: Editor's Pick