Rio’s Olympic beach volleyball venue, thronged by mountains with sweeping views of Copacabana and the Atlantic Ocean, is the early hit of these Olympic Games. It’s a showcase location for Brazil, and Rio’s passion for the beach game is palpable. During the home team’s opening day matches, fans waved their hands while singing the “Hip-Hop Hooray” chorus — yes, Naughty by Nature lives in Rio – bought their beer in bunches and chanted all match long, as if it were the World Cup. “BRA-SIL! BRA-SIL!”

“Brazil is where the spirit of beach volleyball is, O.K.?” says Kamila Merle, a textile engineer who lives in Rio. “It’s in our heart, it’s in our blood, you understand?”

A stroll along Copacabana Beach proves Merle’s point. In Rio, the weekend warriors wear tight bathing suits and spike volleyballs in the sand. What pickup basketball is to Rucker Park or Venice Beach, beach volleyball is to Copacabana: men and women young and old, often in all too tight bathing suits, gather for informal games and amateur tournaments. Sometimes they also play “futevolei” — that’s beach volleyball with soccer rules, no hands.

The party lasted well past midnight on Saturday, when three-time defending gold medalist Kerri Walsh Jennings won her opening round match with new Olympic partner April Ross. Walsh Jennings feeds off all the noise. “I love Brazil’s fans, even if they’re not rooting for me,” Walsh Jennings told TIME before the Games. “They bring out our best.”

Some players, however, have cried party foul. Early in a Saturday preliminary round match between Barbara Seixas and Agatha Bednarczuk of Brazil — known to most as just Barbara and Agatha — and Barbora Hermannova and Marketa Slukova of the Czech Republic, the public address announcer informed the crowd that “we would love it if there’s no booing.” The fans, almost all wearing the Brazilian gold and green, and many waving flags or wearing wigs or just ditching their shirts — immediately ignored his request. They booed and whistled during serves and between points. They needed to distract the Czechs, who won a tight first set but fell to the Brazilians in the third.

Slukova took exception to the constant jeering. She says she hasn’t experienced it anywhere else in the world, and objected to this particular show of Brazilian patriotism. “They don’t know the borderline between what’s appropriate in the moment and what is not,” says Slukova. “We’re also human beings.” She says the negativity isn’t necessary, and wants the Brazilian fans to know it’s considered rude in other beach volleyball locales. “It’s strange,” Slukova says. She calls playing in Brazil “difficult, so difficult.” Her teammate, Hermannova, calls the fans a third player for Brazil. “When the moment is tight, you need that extra help” from fans, says Slukova. “At least someone not booing.”

When asked to react to Slukova, Barbara seemed surprised. “If they were bothered by the boo, I didn’t realize it, because they did an excellent job,” Barbara says. “I think the crowd, they didn’t want to offend them.” To Slukova, the Brazilians had a strange way of showing it. “They just wanted to support us,” says Barbara. “Maybe they don’t know the exact way to do that sometimes.”

The no-booing exhortation was surprising –– after all, beach volleyball is not tennis. Plus, Brazilian fans are desperate for medals in the sport: it’s no surprise they’d try to disturb their opponents, like college kids waving and screaming at a basketball foul shooter. The Brazilian Olympic committee has set a goal of finishing in the top 10 in the medal count, and if that’s going to happen, Brazil’s women’s beach teams — Barbara and Agatha, and top-ranked Larissa and Talita — both need to finish on the podium. Walsh Jennings, who has been undefeated over three Olympics, stands in their way. “There’s a lot of pressure on these girls,” says Brazilian journalist Gustavo Franceschini.

In Slukova’s defense, some of the more organized homerism didn’t seem to fit those Olympic ideals of togetherness and sportsmanship. “SUPER SPIKE!” the Portuguese-speaking announcer shouted after a Barbara-Agatha point. The loudspeaker blasted in high-volume song lyric: HERE COMES THE BOOM! HERE COMES THE BOOM!

That’s no way to treat Olympic guests. But you can’t legislate booing — that’s always fair game in sports. Even at the Olympics. 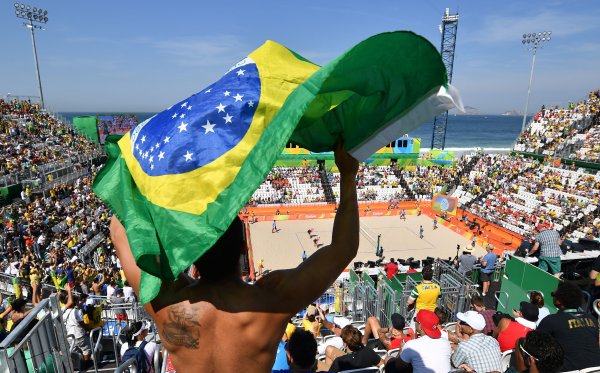 7 Things From the Olympics Opening Ceremony You Couldn't See on TV
Next Up: Editor's Pick