As South Africa’s long-dominant African National Congress party found out in local elections on Aug. 3, when it was roundly trounced by the opposition, it’s hard to stay on top forever—even if you’re the party of Nelson Mandela. Here’s a look at five long-ruling parties around the world, and what their longevity says about the politics of their countries today.

1. India: Indian National Congress
From the dawn of independence in 1947, the Indian National Congress dominated its country’s politics for decades; it was, after all, the party of liberation from colonial British rule. Then there was the Congress Party’s broad appeal. India is a profoundly diverse country in which 122 different languages have earned official recognition. Most other Indian parties have been built around a particular regional, caste, religious, or language identity, but the Congress party’s Nehru-Gandhi family dynasty provided a degree of name recognition and a big tent approach to coalition-building that still has no equal in the history of Indian politics.

In recent years, though, public patience with the Congress Party’s inability to bring about faster economic development and tackle rampant corruption has cost the party dearly. Narendra Modi’s Bharatiya Janata Party (BJP) once tightly focused on Hindus of all castes and classes across India, but he has since added a broader appeal to the party’s emphasis on economic development, sweeping the increasingly rudderless Congress Party aside with a landslide election victory two years ago. Under Modi’s reform-minded leadership India has become the world’s fastest-growing large economy, expanding 7.9 percent in the first quarter of 2016.

2. Malaysia: United Malays National Organization (UMNO)
Like India’s Congress, Malaysia’s UMNO is a party of national liberation. But UMNO a party built on ethnic identity—rather than one that transcends it. That’s fine in a country where the dominant ethnic group makes up more than 68 percent of the population. For years UMNO has instituted preferential economic policies for Malays at the expense of Chinese (23 percent) and Indian (7 percent) minorities, using government benefit programs to shore up political support. They’ve also tilted the election system in their favor, with rural Malay votes given more value than votes from urban, multicultural ones.

This helps explain why Najib Razak, Malaysia’s embattled prime minister, has been able to weather the country’s current financial scandal. Najib established a sovereign wealth fund in 2009 to help the country attract foreign investment and boost its economy, but somehow more than $1 billion found its way into Najib’s personal bank account. But Najib faces little danger of ouster because he continues to dominate the party that dominates his country’s politics.

Without a party that can gain traction in middle Malaysia—ethnic Malay, rural and moderately Muslim—without alienating those who live on benefits, UMNO will continue to thrive as a majority identity party with a tight grip on power.

3. Mexico: Institutional Revolutionary Party (PRI)
The PRI—a centrist, pro-business and technocratic party—dominated Mexican politics for nearly the entire 20th century, holding the country’s presidency for 71 years. Founded in 1929, the party built a broad consensus across labor movements, farm workers confederations and other organizations that provided the political infrastructure needed to make the PRI a dominant political force across the country.

Read More: What You Need to Know About India’s Biggest Economic Reform in Decades

But by the 1980’s, social unrest provoked by an economic crisis had forced the PRI government to rewrite restrictive electoral laws, making it easier for other parties to gain seats in congress and increase their political influence. Over the following years, electoral laws were loosened further, allowing opposition parties to win significant electoral victories. These parties then used their new leverage to negotiate a more comprehensive and fairer electoral law in exchange for political support for key programs—like the North American Free Trade Agreement (NAFTA) in 1994.

After losing the presidency in 2000, PRI is now back in power under current president Enrique Pena Nieto, but the party has become one part of a modern and dynamic multiparty system.

4. Japan: Liberal Democratic Party (LDP)
Japan’s conservative LDP has been in power for basically the entire postwar period save for four years (1993-1994, 2009-2012). Much credit goes to its deft management of pork-barrel politics—mostly in the form of public works projects, agricultural subsidies and tax breaks—that secure votes and financial contributions. It’s also benefited from the fact that the LDP’s opposition parties have proven incapable of maintaining stable governments. The 2011 Fukushima disaster would have been difficult to manage no matter what, but the fact that it happened during the Democratic Party of Japan’s (DPJ) short leadership tenure was a big break for the LDP.

Today, the LDP, its coalition partners and its unaffiliated supporters hold a two-thirds majority in both the Upper and Lower Houses of the Diet, Japan’s parliament. Yet the LDP’s control of the country’s politics is far from ironclad. A by-product of its strategic use of pork-barrel politics has been a mountain of public debt (247 percent debt-to-GDP). Problems loom if the LDP fails to come up with viable solutions to address the country’s growing list of economic and demographic challenges—a quarter of all Japanese people are over the age of 65, and that figure will rise to 40 percent by 2060.

But for the moment, the LDP remains as dominant as ever.

5. South Africa: African National Congress (ANC)
The ANC played the leading role in the struggle against apartheid, but its enduring success owes plenty to the legacy built by the icon of liberation. Nelson Mandela remains the face of the anti-apartheid struggle, and the ANC is his party.

But the corruption and ineptitude of President Jacob Zuma has the ANC beating back challenges from the opposition Democratic Alliance and even the ultra-leftist Economic Freedom Fighters. The ANC suffered key losses across the country in last week’s local elections, where it won just 54.5% percent of the national vote; the ANC had won at least 60 percent in every election since Mandela took office in 1994. The Zuma years have been marked by high unemployment (26 percent), sluggish economic growth and a series of scandals around the President—he currently has 783 criminal charges pending against him. The ANC’s appeal as a liberator has also become less relevant to a younger generation of South Africans, known as the “Born Free” generation, who are more interested in education, jobs and upward mobility. No South African under the age of 25 is old enough to remember apartheid. The main opposition parties have begun focusing less on history and more on the future in their campaigning. As elections results have shown, that’s a good bet.

The ANC will have to change in coming years if it is to maintain its dominance. 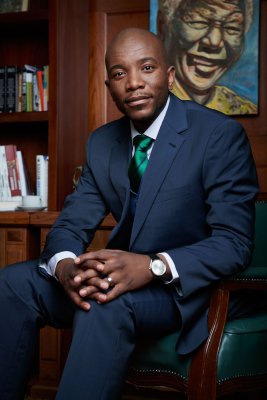 Meet the South African Politician Who's Been Compared to Barack Obama—But Prefers Bill Clinton
Next Up: Editor's Pick