The Olympic Opening Ceremony and its winding parade of nations are a television mega-event. But the cameras can’t pick up everything (although Pita Taufatofua, Tonga’s shirtless, oiled flagbearer played just as big inside the stadium). Here are seven takeaways from the ground in Rio:

1. The security presence was intense. When our media bus pulled up near the Maracanã Stadium, three officers immediately jumped in to sift through everyone’s bags––the first time I’ve seen it happen in six Olympics. The guards even confiscated the bug spray from my colleague Alice Park, ace TIME health and Olympic reporter. They let her spray herself first, though.

2. The food prices would come as a welcome relief to anyone who’s had a hot dog at a Major League ballpark in the last decade. A double cheeseburger cost about $6.00, while hot dogs and veggie sandwiches were around $4.10. That’s a great deal at any major sporting event, let alone the Olympics, where fans would normally expect to get rooked.

3. Every Olympics, the organizers give media types a guide intended to help decode the often convoluted themes of the Opening Ceremony. According to the Rio 2016 Cliffs Notes, the message of the night is that we should work together to take on climate change: “Earthlings, let’s replant, let’s save the planet!”

4. The Brazilian TV host who addressed the Maracanã crowd about a half hour before the start of the show was introduced as “the Queen of Diversity.” She encouraged everyone to make Arsenio Hall woof-woof-woof sounds (though without the fist pump –– not a true “Dog Pound.”) She then suggested that the audience use the toilet and touch up make-up, lest the camera pan in on you in front of 3 billion people, and your seat is empty since you’re in the loo. Then she started “ummmmmmmm”ing, as if in meditation. Best ceremonies warmup I’ve ever seen.

5. When Gisele Bündchen strutted into the stadium for the final catwalk of her career, sure, the crowd was pumped. But it wasn’t a thunderous reaction. Truthfully, I expected more for a Brazilian supermodel in her own country. (Check that – she’s an “übermodel,” according to that official guide) Maybe catwalks don’t work as well in an 80,000-seat stadium. She was kind of hard to see. But when 1,500 people took the floor to dance to catchy a Brazilian pop tune, everyone got off their seats. Now it felt like a party.

6. Colorful as it is, the parade of athletes tends to drag the energy down in the stadium. But backstage, in the area where the athletes prepare to file in, the energy rises. After the opening performers finished their high-pressure work — you try dancing or lifting stuff in front of an audience of three-billion — they lined up along a railing, treating the Olympians like rock stars. “I was the only Swedish dancer in the whole opening ceremony,” one woman stared yelling, while hopping up and down. The athletes snapped selfies and traded pins with the performers, most of whom were still wearing their wigs and assorted costumes. When Brazil entered, everyone sang. When North Korea walked by — not dead silence, but let’s call it respectful cheers.

7. Those smiley folks pedaling the heavily-planted tricycles that led each delegation onto the stadium floor? They were pulling multiple shifts. After dropping off the athletes at their designated spot, the drivers circled back around the track, forming a line to pick up their next team: an official swapped the sign of one country for another. It was quite an efficient system. Maybe they’ll come back for Tokyo in 2020? 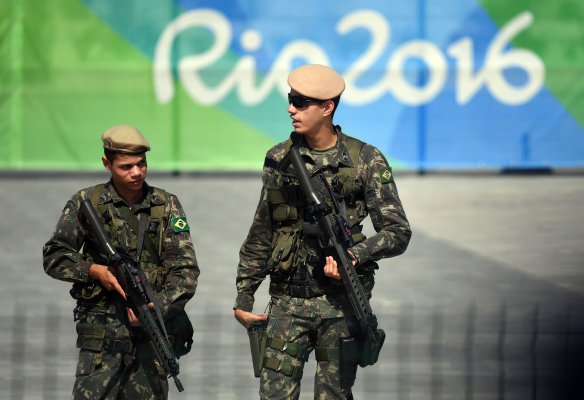 Terror Threat Looms Over Rio Olympics
Next Up: Editor's Pick