Ahead of an economic speech Donald Trump will deliver in Detroit on Monday, the Republican nominee released a list of economic advisors that includes hedge fund managers, bank executives and a cigarette manufacturer.

Some of the advisors have worked with Trump on his real estate projects. Several are investment bankers who managed tens of billions of dollars in international investments.

“I am pleased that we have such a formidable group of experienced and talented individuals that will work with me to implement real solutions for the economic issues facing our country,” Trump said in a statement.

Here’s a look at who will be advising Trump on economic policy:

A man who told personal stories about Trump at the Republican National Convention, Barrack runs an investment firm that has been involved in $60 billion in investments over a quarter century. Colony Capital has 14 offices in 10 countries. After Barrack’s RNC speech where he praised Trump, the Washington Post reported he backed out of a partnership with Trump to redevelop a post-office into a hotel in downtown Washington, D.C.

Beal Bank is one of the largest private banks in the country. Founded by Andy Beal in 1988, Beal’s two banks have combined assets of more than $7 billion. The billionaire also briefly had an aerospace company that he said he closed because it could not compete with NASA.

Calk says in his biography that he attended the United States Military Academy Preparatory School at West Point, also known as West Point Prep, and that he was later a helicopter pilot in the U.S. Army. Calk has a long career in banking. He currently manages the the Federal Savings Bank with a focus on private business loans. Calk was sued by CitiMortage for $4.5 million in 2014 for allegedly misrepresenting information on loans from a previous bank he ran.

DiMicco’s business acumen comes from a life spent in the steel industry. He ran the country’s largest steel company and regularly blogs about American manufacturing and jobs. He has been an avid supporter of Trump’s trade proposals, recently writing, “The Trump trade policy is both sound and necessary in today’s World where ‘Trade Cheating’ has become the norm.” DiMicco became Trump’s trade advisor in early July, saying he had never met Trump in person but had corresponded with him for a decade.

Kowalski is the deputy staff director for the Senate Budget Committee. His staff biography says he has 20 years of government budget management experience. Kowalski’s boss, Wyoming Sen. Mike Enzi, has said he will support Trump.

The President and CEO of Vector Capital, Lorber used to run Nathan’s Famous, a chain of hot dog restaurants. He is also president of real estate investment firm Douglas Elliman. Vector Capital manufactures cigarettes but Lorber prides himself on detailing the addictive and cancerous nature of his products. On Vector’s website, he writes his company “remains the only major tobacco company to carry ‘Smoking Is Addictive’ warning labels on its cigarette packs and to list ingredients on its cartons.”

Malpass worked as a high-ranking Treasury department official in the Ronald Reagan and H.W. Bush administrations. He was the chief economist at Bear Stearns, the New York investment bank that collapsed in 2008 and contributed to the recession. Malpass currently runs a consulting firm focused on global economic and political trends.

David Malpass, the Chief Economist at Bear, Stearns and Co. Inc., speaks at the Council on Foreign Relations in New York City on Nov. 19, 2007.
Mark Lennihan—AP

Once a liberal donor who made his fortune at Goldman Sachs, Mnuchin began running Trump’s national fundraising operation in May. Mnuchin has donated to Hillary Clinton, Al Gore, Barack Obama and John Kerry. Mnuchin has been heavily involved in gearing up Trump’s fundraising from nearly nonexistent to at pace with Clinton.

The founder of Club for Growth is now a visiting fellow at the conservative Heritage Foundation. Club for Growth is known for pushing small-government, free-market ideology — a position somewhat at odds with Trump’s stated goals of limiting international trade. Moore has also been a public policy and economics writer at the Wall Street Journal. In May, he began helping Trump rewrite his tax plan.

A professor at the University of California-Irvine’s Paul Merage School of Business, Navarro frequently talks about the American-Chinese trade relationship. Death By China, a documentary Navarro created, is narrated by Martin Sheen and available on Netflix. His latest book focused on Chinese militarism and how it affects the rest of the world.

An advisor to Harvard Business School and a member of New York University’s Board of Trustees, Paulson is an investment fund manager with more than two decades of experience. Paulson’s firm manages more than $19 billion in investments and he is worth nearly $10 billion. The investment manager famously bet against subprime mortgage loans that failed and led the financial crisis in 2008.

John A. Paulson makes comments during a noontime press conference at Harvard University to announce his gift of $400 million in Cambridge, Ma. on June 3, 2015.
(The Boston Globe/Getty Images)

Roth has won awards as one of the world’s most respected corporate leaders. He runs Vornado Realty Trust and grew up in the Bronx in New York City. Roth and Trump co-own a tower in Manhattan and while Roth is not known for public appearances, he was at Trump’s victory party in April. Roth is New York City’s largest real estate owner. According to Crain’s, Roth owns ten times as much real estate in the city as Trump. 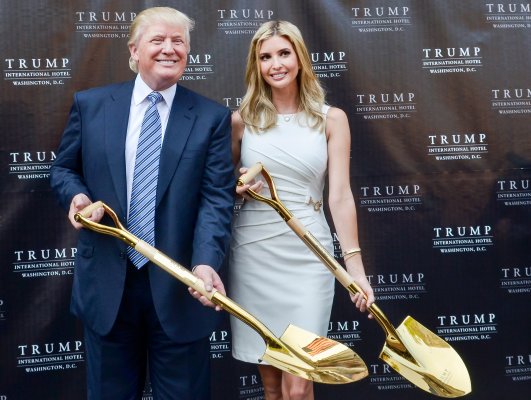 Trump Still Has Not Named Any Women Advisers
Next Up: Editor's Pick