The group of five older men who announced the formation a new political group in a Manhattan restaurant Thursday had a long list of reasons for why Melania Trump should be the next First Lady.

“She would definitely be our most beautiful First Lady ever,” said nightclub owner Noel Ashman, wearing a sleeveless T-shirt. “Incredibly beautiful,” agreed Sammy Musovic, the restaurant owner who organized the event at his Upper East Side restaurant, Sojourn. “She’ll become a fashion icon, as was Jackie Onassis,” says Elliot Hurdy, “When she wore different clothes and stuff.”

The men, accompanied by three women who did not speak until asked, were forming a new group called “Let’s Move Melania into the White House.” This was not a campaign for Trump, they specified. This was all about Melania.

The men occasionally compared Melania Trump’s role in a potential Trump White House to Michelle Obama’s current role, except they referred to Mrs. Obama repeatedly as “Obama’s wife.” When asked about the plagiarism scandal at the Republican National Convention, in which several portions of Melania Trump’s speech sounded remarkably similar to a speech given by Michelle Obama at an earlier Democratic Convention, they shrugged off the dispute as a “trademark” issue.

They similarly had little to say about the new allegations that Trump may not have had her visa paperwork in order during the early year of her modeling career the 1990s. But when asked about the nude photos of the would-be First Lady released by the New York Post on Monday, the men had a lot of opinions. They pointed out that she was young when the racy photo shoot occurred, not yet married to Trump, and it was many years ago.

“People make mistakes and they should be given a second chance,” said Musovic. “Those pictures might even help her,” Shapiro added.

The group was started by Musovic, who grew up in Montenegro near Melania Trump’s native Slovenia. Musovic said he once served Trump at one of his restaurants and recalled that the GOP candidate was very gracious when he was told that the kitchen could not make him meatloaf. Trump left a lousy tip, his friends reminded him, but Musovic chose not to dwell on the past.

“I kinda support his wife more than I support Trump,” he said. “She is from my neighboring country and I want to see someone from Europe excel.”

Musovic says Melania is a hometown hero in Slovenia and in the rest of Eastern Europe. “She’s beloved in the community, she gives to charities,” he said.

“There’s some charities in Slovenia I don’t know about.” He added that she is known for walking around giving out money on the street. “They’re very excited to see her reach this level,” he says of the reaction back home. “She’s very beautiful also.”

The group has no formal connection to the Trump family or campaign, they say, but at one organizer is confident they can raise at least seven figures from the construction business alone. It was not immediately clear whether the money would be directed towards the Trump campaign or towards other promotional efforts.

When asked if there were other reasons Melania Trump should be First Lady, besides her beauty, few of the men had much specific to say. “Every single thing that she’s gonna talk about is gonna help kids, is gonna help women, is gonna help things that have to be helped,” Musovic said.

After a request to hear what any of the three women in attendance thought Melania would do for them, Dawn Lincoln stepped forward. She said she was there to support her friend Musovic.

“I would like to see women’s names not be dragged in the mud for politics,” she said. “Women in politics have been slighted more than men have been.”

So how does she feel about Trump’s comments on women? Lincoln hesitated, then revealed the truth: she’s a Clinton supporter. 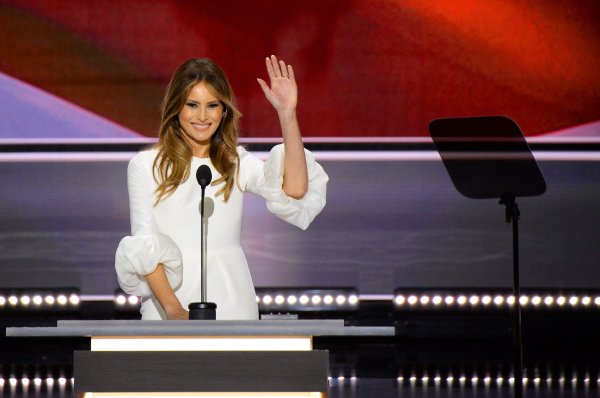