Low Prices, High Crime: Inside Walmart's Plan to Crack Down on Shoplifting

The Walmart Supercenter in Camden, S.C., is a 24/7 retail oasis in an area with few options. There are Walmarts in nearby counties, but some of them aren’t open 24 hours a day. Camden’s location—close to Lake Watertree and a nearby river with few bridges—makes it difficult for residents to go anywhere other than the sprawling complex for everything from bread to tires to electronics. And it’s a place the Camden Police Department knows well. In the first six months of 2016, 14% of the department’s police reports originated at Walmart, most for shoplifting—a figure that could be much higher if you ask the town’s police chief.

Across the U.S., Walmarts have become a regular stop for law enforcement responding to calls. In Camden, The State reported in July that 187 of the police department’s 1,372 calls from January to June this year occurred at Walmart. The Tampa Bay Times found 16,800 calls to police for Walmarts in Pinellas, Hillsborough, Pasco and Hernando counties in just one year—four times the number of calls to Targets in the area—and amounting to the equivalent of two calls an hour. In Louisville, WDRB reported more than 9,200 calls for police at area Walmarts since 2012, by far the most of any location in the city. In April 2015, a Portsmouth, Va., Walmart was the scene of a fatal encounter between a white police officer and a black unarmed man accused of shoplifting. Police in Amherst, N.Y., recently discovered a meth lab inside a drainage pipe underneath a Walmart parking lot. And earlier this month, criminal charges were brought against three employees of a Florida Walmart Supercenter accused of fatally injuring a shoplifter who was trying to steal $380 worth of DVDs.

Read more: Walmart May Spend $3 Billion to Take on Amazon

To combat crime and ease the burden on law enforcement, Walmart has begun a novel experiment: deal with shoplifters internally by meting out its own version of law and order through an initiative called “Restorative Justice.” The idea is to give some accused shoplifters, such as first-time offenders, the option of completing an online remedial program designed to deter through education, rather than jail time.

The program, which offenders must pay an undisclosed sum to take but doesn’t involve the police, employs an approach sometimes found in schools and prisons, which emphasizes rehabilitation and reconciliation between the offender and the community. Walmart spokesperson Brian Nick says the initiative is reducing police runs requiring officers to come to Walmart and “hopefully giving people a second chance.”

There are some signs of its success. The Arlington Police Department, for example, estimates that the program has reduced police calls to local Walmart stores by 40.5% from October 2015 to June 2016. But it also raises questions about whether the nation’s largest retailer should play judge and jury within its stores. One of the companies hired by Walmart to administer the courses—Corrective Education Company—is currently being sued for false imprisonment and overcharging alleged shoplifters.

How Walmart became a hub for crime

Walmart has struggled for decades with the perception that its stores are crime magnets. A 2014 study led by a criminologist at the University of South Carlina showed that crime rates around Walmarts often remained constant even as they dropped in surrounding areas. The sprawling stores, roughly 5 acres in size, can be difficult to secure, and for many small towns, they’re not only a central hub of commerce but a gathering place for the surrounding community.

“It’s the location that has more people at it than any in our town,” says Floyd, the Camden chief. “It’s open 24 hours a day. The parking lot is never empty. It’s a major public area.”

Charles Fishman, author of The Wal-Mart Effect, says that throughout the 1990s and 2000s, most of Walmart’s crime was happening in the store’s parking lots. An internal figure cited in the documentary “Walmart: The High Cost of Low Prices” suggested that 80% of crime at Walmarts happened outside. In response, Fishman says the company made efforts to prevent criminal activity through increased surveillance cameras and better lighting. Today, most of the Walmart-related crime appears to be taking place in the store’s aisles.

“At night, they’re the only place that’s open, and where Walmart is the dominant retailer, they’re pulling in visitors from all over,” Fishman says. “They can easily generate more traffic than the whole town. By pure numbers, the crime is going to be where the people are.”

There are questions about Walmart’s role in the crime at its stores. The company has expanded over the years with a deliberately lean staffing model, potentially leaving the stores vulnerable to shoplifting, says Burt Flickinger, managing director at Strategic Resource Group, a retail consulting firm. The company has historically tried to keep labor costs as low as possible, an approach that goes back to the store’s founding, and Flickinger says that has meant relying heavily on local police departments for store security. He estimates that there are 400,000 fewer Walmart workers in the U.S. today compared with 10 years ago, potentially leaving stores even more vulnerable to crime.

“They don’t understand that when you cut staffing, which includes security, your ‘shrink’ or inventory loss goes up,” Flickinger says. Fewer employees in stores often mean more opportunities for customers to steal, and he estimates that Walmart loses roughly 2 cents for each dollar in sales to shoplifting. Major retailers like Costco or WinCo have loss figures around seven-tenths of 1%, or less than a penny for each sale, Flickinger says.

But that might be changing. Walmart recently boosted wages for its workers, something that is expected to boost employee retention, and it hired 9,000 new people this summer to work the doors and check receipts as a preventative shoplifting measure. The company is also pushing to make current employees more visible on the sales floors and implementing enhanced security measures on theft-prone products.

Walmart believes its Restorative Justice program will alleviate the burden on local departments responding to petty crime calls. David Karp, a professor of sociology at Skidmore College who studies restorative justice, says the company’s approach is promising. “If they can reduce shoplifting by helping people understand the costs to the company as well as to themselves, that’s a good thing,” he says. “I think Walmart recognizes that sending them to jail isn’t particularly productive.”

But those taking the course must pay a fee, and Karp warns that it would be counterproductive if the company is gouging shoplifters. The San Francisco City Attorney is currently suing one of Walmart’s third-party vendors responsible for administering restorative justice courses—Corrective Education Company—for overcharging people accused of shoplifting and falsely imprisoning them while they’re taking the course. The lawsuit alleges that some retailers take suspected shoplifters “to a secluded area in the back of the store” to show them a video produced by CEC. One woman was reportedly asked to pay $500 to take CEC’s course after she was accused of stealing items worth $6.97 from a Goodwill Industries store.

Nick, Walmart’s spokesperson, said he didn’t have figures on how much CEC charges those accused of shoplifting from Walmart. “It is 100% voluntary in terms of participation, and I do know that financial aid can be available,” Nick said. He declined to comment on the ongoing lawsuit.

In a statement, CEC spokesperson Laura Barnett said she is “confident that we will prevail at trial” and said CEC “has successfully worked with our retail and law enforcement partners to reduce calls to police by as much as 40 percent.”

Reducing shoplifting at the nation’s largest retailer will likely take years, Flickinger says, but Walmart’s efforts seem to show they’re taking it more seriously than before. “They’re doing everything they can to stop it,” Flickinger says. “But it’s going to take three to five years, and more likely five years or more. Something transformational can’t be done in a day, a month, or even a year.” 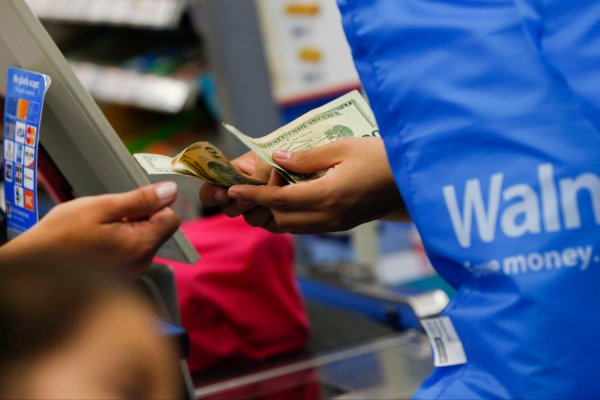