A picture taken on March 23, 2016 in Brussels shows the frontpage of several newspapers, one day after bombings at Zaventem Airport and on a metro train.
Philippe Huguen—AFP/Getty Images
By Fred Ritchin

There has long been a struggle over the control of image between journalistic media and those depicted by it. The more powerful subjects (celebrities, politicians) have been able to stage events, control access, and influence in various ways how they are portrayed in publications. Those with less power within society (the poor, the marginalized, foreigners, even the middle class) have often found themselves represented in stereotypical ways, with little attempt made to explore their individuality.

Then there were those who, in their own view, had received insufficient attention on the international stage and set about to address that in the most deadly ways, manipulating media on a large scale. During the Munich Olympic Games in 1972, Black September operatives, having rendered themselves faceless and mysterious under black hoods, held Israeli athletes and coaches hostage, inaugurating the current era’s real-time reporting and viewing of mass murder by an enormous television audience, in this case those already assembled worldwide to watch the Games. In 2001 another group of anonymous men hijacked airplanes and attacked the World Trade Center towers under a picture-perfect blue sky, with both professional media and citizens serving as an echo chamber depicting the deadly results, again showing horror as it happened.

Now, trying to fight back against the current wave of terror in their country, Le Monde and other French media outlets have decided to fight back by refusing to publish the photographs of the perpetrators of the terrorist attacks. (Le Monde previously had taken the step of not publishing any ISIS propaganda documents.) In a July 26 editorial entitled, “Resisting the Strategy of Hate,” Jérôme Fenoglio, the newspaper’s director, wrote: “Since the attack in Nice, we will no longer publish photographs of the perpetrators of the killings, in order to avoid the potential effect of posthumous glorification. Other discussions about our practices are taking place.”

In the U.S., the “No Notoriety” campaign, founded by the parents of Alex Teves, one of 12 people killed in the 2012 Aurora, Colorado, theater shooting, offers a simple response to mass violence and the perverse desire for infamy by the murderers: “No name. No photo. No notoriety.” Instead, they call “on the media to eliminate the gratuitous use of the name and likeness of rampage mass killers, and shift the focus to the victims, heroes and survivors.” The exception would be if the alleged assailant was still at large and the publication of identifying details would aid in his or her capture. And, similarly to Le Monde, they also ask the media to “refuse to broadcast/publish self-serving statements, photos, videos and/or manifestos made by the individual.”

But media is not a monolith, and social media allows enormous numbers of people the ability to self-represent online. While the great majority may produce and share albums of imagery detailing their own lives as well as those of their families and friends, terrorists and criminals committing barbaric acts while intent on promoting their own agendas also avail themselves of it. No longer do strong editorial filters exist that can be relied upon to exclude certain excruciating horrors from public view when social media can so easily circumvent any such barriers. Today it is difficult to imagine that it was not until September 1943, nearly two years after the U.S. had entered the conflict, that the first photograph of US soldiers who had died in World War II was shown in an American publication. That month LIFE magazine included a black-and-white image of three dead soldiers simply lying in the sand on Buna Beach that had been photographed so that none of their faces could be seen. A note from the editors accompanied the publication of this photograph by George Strock asking, in part, “shall we say that this is too horrible to look at?”

Today, of course, things are extraordinarily different. On Aug. 3, the New York Times reported how Harry Sarfo, a German who went to Syria to join ISIS, was asked by other German fighters to be an actor in a propaganda film to be made for German speakers. They went to Palmyra, Mr. Sarfo told the Times’s Rukmini Callimachi, where he was asked to hold the group’s black flag and to walk again and again in front of the camera as they filmed repeated takes.

But then the description of his experience during the filmmaking becomes horrifyingly surreal: “Syrian captives were forced to kneel, and the other German fighters shot them, showing an interest only in the cinematic effect. One turned to Mr. Sarfo immediately after killing a victim and asked: ‘How did I look like? Did I look good, the way I executed?’” In comparison President Obama’s decision in 2011 not to publish photographs of the corpse of Osama bin Laden, the mastermind of the September 11 attacks, becomes even more poignant: “It is important to make sure that very graphic photos of somebody who was shot in the head are not floating around as an incitement to additional violence—as a propaganda tool.” He continued: “That’s not who we are. . . . You know, we don’t trot out this stuff as trophies. . . . We don’t need to spike the football.”

Some not only spike the football, but kill their captives for the camera, and continue filming for just the right look. Mr. Sarfo began to doubt his allegiance to ISIS when he saw the cruel treatment of recruits who could not keep up during their training. But it was, as Ms. Callimachi summarized it, his role as an actor that ended any sense of solidarity: “Making the propaganda video provided his final disillusionment when he saw how many times they recorded each scene in the five-minute film. Back in Germany, when he had been inspired by similar videos, he had always assumed they were real, not staged.”

The astonishing lack of media literacy in this age of the image has encouraged many misperceptions, enabling much of advertising and celebrity culture to flourish, and now evidently being useful to ISIS and other such organizations. If a motivation is required to finally getting around to teaching media literacy in schools and elsewhere, there may be no better one than Mr. Sarfo’s misplaced trust.

But the primary goal of the media, at least the media willing to forego the spectacular, might well be to de-emphasize and even destabilize the propaganda wars by emphasizing more of the authentic and the everyday.

Certainly it should not have been a surprise to find out that Muslims in the U.S. military have served heroically, or that their families feel horrific pain at their loss, as it seemed to be for many when Khizr Khan spoke in Philadelphia about the loss of his son, an Army captain, who had served in Iraq. Just as too often African Americans have been represented in the media largely for violence and other societal infractions, it is unfair and demeaning to highlight Muslims and Muslim-Americans principally when there is a mass attack. Informing readers about more of the larger family album that provides society’s fabric can serve to share some of the more constructive energy to be found in social media, affirming connections rather than speculating on an apocalypse.

For me, I prefer to be given the opportunity to view the identity photos of the murderers, in part as a way of recognizing that in appearance they often seem so ordinary, and in part to adhere to my responsibility as a citizen to know more of what is going on. Looking at their faces, or knowing their names, in no way is an affirmation of their lives or their deeds, but only an acknowledgment of what unfortunately exists. Certainly there is no reason to amplify these photographs of killers with gaudy headlines or gory imagery of casualties, trying to attract viewers as if to a freak show, nor is there any reason to give their image prominent placement on any screen or paper publication; a small photograph and a single mention of their name is all that is required. Restraint will be much appreciated.

Left: Abdel Malik Petitjean, 19, one the two men who stormed into a church on July 26 in the northern French town of Saint-Etienne-du-Rouvray during morning mass and cut the throat of a 86-year-old priest at the altar. Right: A reproduction of the picture on the residence permit of Mohamed Lahouaiej-Bouhlel, the man who rammed his truck into a crowd celebrating Bastille Day in Nice on July 14.
Agence France-Presse—Getty Images

As LIFE reported it, with the publication of the 1943 photograph from Buna Beach, President Franklin D. Roosevelt and the US government finally “decided that the American people ought to be able to see their own boys as they fall in battle; to come directly and without words into the presence of their own dead.” We might still take these words to heed, while working to amplify a sense of the good and hopeful, the normal and the everyday, in people. Others will make of these perpetrators of horror what they will, but this has always been the case.

Fred Ritchin is Dean of the School at the International Center of Photography. 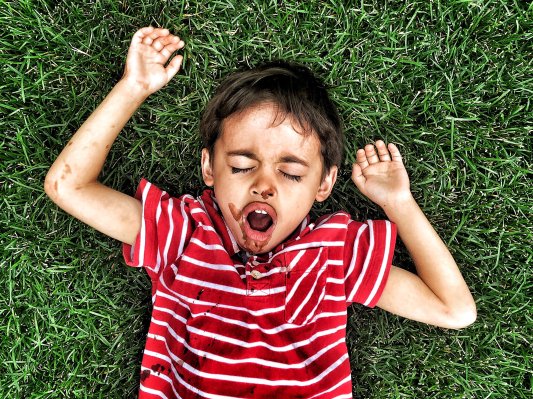 How to Take Great Vacation Photos of Your Kids
Next Up: Editor's Pick