'The Safest Place in the World': Rio de Janeiro's Mayor Has No Worries About the Olympics

Eduardo Paes, the mayor of Rio, reclines in his chair in a vast conference room on the 13th floor of City Hall, and exhales. The cascade of negative news that has recently hit the Olympic city—rising crime, the Zika virus, faltering infrastructure, the threat of terrorism, a national political crisis and a dire recession—does not seem to have dented his confidence. “I’m a true believer in myself,” he says. “Did you get that?”

Until the strain of handing the Olympics amid Brazil’s various crises dulled his reputation a little, Paes had achieved a stellar political career in Rio, a city beset by corruption and organized crime and not known as a forgiving political environment. He was reelected in 2012 with 65 percent of the vote. Untouched by the multibillion-dollar graft scandal that has tainted dozens of his colleagues nationally, Paes remains a charismatic salesman for his city as it hits the world stage.

But that enthusiasm is not shared by many of his fellow Brazilians, as recent polls show. “Rio will get there,” Paes says, speaking two weeks before the Opening Ceremony, which takes place on Friday evening. “The country is going through a crisis but I think as we get closer the mood will come. I think we’re coming to that point now. When I got to London two or three days before [the 2012 Olympics] I didn’t feel the mood. I was disappointed. Then I came back for the Closing Ceremony. It was awesome. It was a completely different mood.”

The 46-year-old mayor is also bullish on the city’s chances of pulling off a secure Games, thanks to the 68,000 police and army personnel that will be on duty in Rio. “This is not an Olympic worry—this is about the everyday life of the city,” he says. “On the contrary, I think it’s going to be the safest place in the world to come in August. Unfortunately, I wish I could say it’ll be that safe after the Games.”

Paes is a member of the centrist Brazilian Democratic Movement party, which also includes Brazil’s interim president Michel Temer, who took over after Dilma Rousseff was impeached in May over accusations of financial mismanagement. (Her impeachment trial is scheduled for the end of August.) It is the fifth political party of his career. First elected as mayor in 2008, his fortunes have been closely intertwined with the Olympics since they were awarded to Rio in 2009. So it’s not unsurprising he is keen to make a spirited defense of the Games–and, ultimately, his legacy.

At the same time, Paes is perhaps fortunate that he can claim that many of the Olympic mishaps that have occurred so far are outside his remit. Both the cleanup of pollution in Guanabara Bay, which has been a dire failure, and rising crime in Rio are the responsibility of the state-level government, not the city. The Olympic Village—which has already been the subject of complaints from athletes—was his job, however. Paes has also provoked ire for evicted people to make way for Olympic development, and for decisions that benefit property developers, such as the deals that will allow them to sell apartments on Olympic sites, potentially for vast profit. But he can point to a role in successes that will last beyond the Games, including the construction several major new transport links and the redevelopment of the city’s rundown port. “We won the bid because we had worse infrastructure than Chicago, than Madrid, then Tokyo,” he says, alluding to the IOC’s desire for cities to have a tangible Olympic legacy. “We were a better city but we didn’t have better infrastructure.”

The mayor’s critics suggest his closeness to developers and other corporate interests, a trait he shares with many politicans accused in national corruption scandals, does not always benefit the city. But in eight years he has faced no serious allegations of corruption or links to organized crime, a rarity among politicians of his stature in Rio.

In the interview, he is quick to dismiss any suggestion that his impressive electoral success in a city as murky and complex as Rio de Janeiro had any unseen price.

For example, did the campaign contributions he received from construction companies involved in building the Olympic Park influence his decisions in any way?

And are the attempts by drug gangs and other organized crime elements in the city to control and influence elections here a significant problem?

Indeed, do you have to compromise at all to be a successful politician in Rio?

Given the all-encompassing nature of the corruption revealed by Operation Car Wash, is he confident there was no corruption in Olympic construction projects?

With his term ending in October, Paes has his eye on the governor’s mansion. (“I want to be king of Rio,” he says. “Just joking, the emperor.”) And it would probably be foolish to imagine his ambitions end there, with the presidential election in 2022 a likely target. But for now, he’s focused on helping Rio make the most of its Olympic moment—no matter the criticism. “It’s a city that celebrates better than anyone, even at the bad moments,” he says. “It’s the most amazing and beautiful place in the world.” 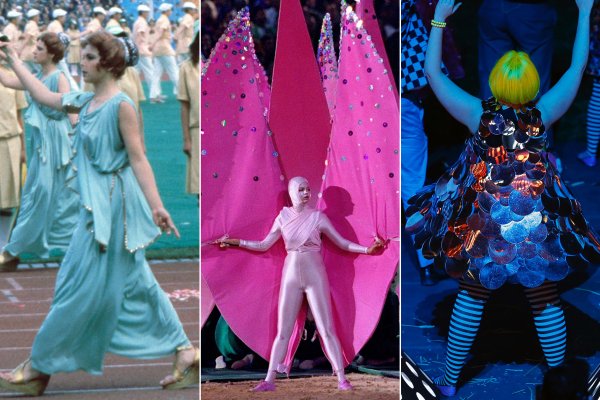 Spectacular Costumes From Past Olympics Opening Ceremonies
Next Up: Editor's Pick