China's Propaganda Machine Has Been on a Video Spree

Their production values hardly rival that of Hollywood and their messages are crude. Over the past few days, Chinese videos have proliferated blaming hostile Western forces for any number of sins: fomenting ethnic unrest, stealing Chinese islands in the South China Sea, ruining a teenager from Hong Kong and even warping the mind of a veteran lawyer so she was compelled to accept interviews from foreign media.

The sources of the videos vary. One is a supposed confession from Wang Yu, a lawyer who was swept up in a crackdown on the legal profession that began last year. Another appears on the social-media account of a Chinese judicial body and called Hong Kong democracy activist Joshua Wong, 19, an “American-led Western power.” Those who stir up trouble in the restive regions of Hong Kong, Tibet and Xinjiang, the viral video continues with apocalyptic intonation, are linked to “the dark shadow of the Stars and Stripes.” Still another is a three-minute affair that aired 120 times a day over New York’s Times Square in order to present China’s perspective on the South China Sea—basically, that Beijing has owned almost all of it since ancient times.

On Chinese social-media sites, other videos have appeared, linking foreign journalists to Western diplomats or painting Chinese human-rights lawyers (in cartoon form) as tools of foreign governments. Indeed, all these videos, although from different sources, share the same aim: to warn against an American-led conspiracy to wound China through subversion, unrest or even territorial theft.

It might be tempting to dismiss these videos as ham-fisted propaganda doled out by an out-of-touch Chinese Communist Party. But that is to misread their aim. These videos are not designed for Western consumption, with the exception of the Times Square video. They are meant for a domestic Chinese audience, one whose growing sense of patriotism proves that decades of propaganda have worked very well. “The Chinese Communist Party puts great emphasis on so-called ‘thought work’ from a very young age,” says Feng Chongyi, an expert in Chinese intellectual and political development at the University of Technology Sydney. “They have established this very strong nationalistic narrative and even if Chinese go overseas and can access other information, many still choose to believe in the state propaganda that they have been socialized in since kindergarten.”

On Thursday, human-rights laywer Zhou Shifeng was found guilty of “subverting state power” and sentenced to seven years’ imprisonment. In the two days preceding Zhou’s sentencing, two other activists were also convicted of the same crime. Amnesty International labeled the trials “a political charade” that is part of Chinese President Xi Jinping’s mounting assault on dissent. The trials, like the videos, serve a political purpose. “When Chinese look around, they see that those who support the party and its causes can succeed materially and become very wealthy,” says Professor Feng. “Anyone who confronts the state fails miserably. The lesson is that pride brings material benefit, too.”

Still, does the average Chinese buy the words of a professor at a Chinese military institute, who called the animated Hollywood film Zootopia a sly effort to “disseminate American values and America’s global strategy?” Are Chinese hipsters really going to be swayed by a rap video linked to the Chinese Communist Youth League and performed by a Chinese group that disses foreign “media punk ass white trash?” (The ensemble’s leader Wang Zixin told TIME in June that he wants “to change Westerners’ stereotypes about us.”)

Qiao Mu, a media professor at Beijing Foreign Studies University who has been demoted to library work for his outspokenness, gives his countrymen a bit of credit. “Not all Chinese audiences treat these videos seriously,” he says. “They repost it just for fun.” But fun is not exactly a hallmark of China’s dissident community at the moment, given that Xi’s crackdown on human-rights defenders has netted hundreds of activists and some of their family members. “The content of the videos and their words are often flawed,” Qiao says. “But they are very attractive and inflammatory. For example, they express anti-American and patriotic feelings in a humorous way. As independent intellectuals, we should learn from them.” 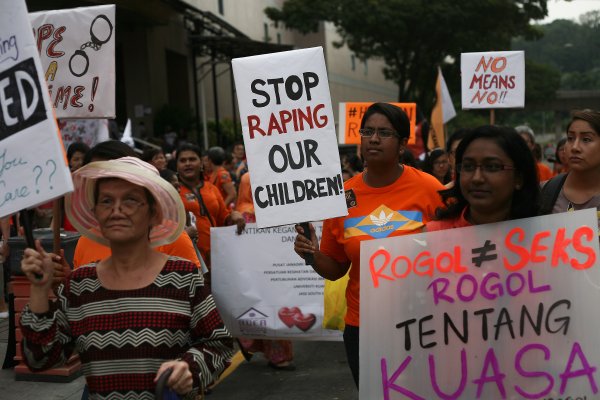 Malaysian Man Accused of Rape Avoids Jail After Marrying His Teenage Victim
Next Up: Editor's Pick