Late on Aug. 3, after a debate lasting almost eight hours, Indian lawmakers approved plans for a major economic overhaul to turn the country into one unified market in which businesses can trade goods and services across state lines without having to navigate a prohibitive array of federal and local taxes. In what has been billed as the most significant reform since India opened up its economy in 1991, the measure is aimed at sweeping away a maze of levies that have hampered economic growth by making it harder for businesses to expand nationwide. Instead, the idea is to introduce a single tax system that would allow, for example, freight trucks to move quickly across India, rather than spending hours idling at multiple checkpoints filling in forms and making tax payments when they travel between states.

By simplifying the system, India, already the world’s fastest-growing large economy, could see growth rise by as much as 2%. The successful passage of the so-called Goods and Services Tax (GST) bill is a big win for Prime Minister Narendra Modi, who has been criticized for not doing enough to reform India’s economy since he came to power in 2014. Here is what you need to know about the landmark reform.

It has been a long time coming.
India’s current tax system has long been recognized as a major drag on the economy. Plans to simplify the process were first mooted more than a decade ago, and the first GST bill came before Parliament in 2011, when Modi was still a regional leader. It was his Bharatiya Janata Party (BJP), then in opposition in New Delhi, that blocked the law proposed by the Congress Party–led government. But the tables were turned in 2014, when Modi led the BJP to power and the Congress began opposing the measure. More than two years of political bickering followed before the Congress, which found itself increasingly isolated on the issue as the BJP won the support of regional political parties, finally relented this week.

And there is a long way to go before the new system can be implemented.
The measure approved on Aug. 3 is only the first step in making the new tax system a reality. It paved the way for constitutional changes, which will be followed by lengthy, and potentially fractious, discussions over the precise rates of tax. A balance needs to be struck between setting a high enough rate that earns the revenues sought by the states, but one that isn’t so high that it sparks inflation. A new IT system also needs to be readied to implement the regime, and tax collectors across India need to be trained. Business too need to prepare: after spending decades trying to get their heads around the current tax maze, they need to be brought up to speed on the scope of the new system, a potentially costly and time-consuming exercise. As two top Indian economic officials said in a recent op-ed, the new regime will be “fiendishly, mind-bogglingly complex to administer.”

If he succeeds in implementing the overhaul, the new system could go down as one of Modi’s most significant achievements.
When he was elected in 2014, Modi’s supporters portrayed him as an economic modernizer who would finally complete the unfinished business of 1991 by tackling the thorny structural problems that have held India back. But the optimistic campaigner we saw during the 2014 elections was replaced in office by a cautious tinkerer who seemed unwilling or unable to make significant changes to India’s economic architecture. Although growth has been high, India continues to suffer from a massive jobs shortage along with an array of other problems, including creaking infrastructure and its mind-bogglingly complex tax system. By finally turning India into a unified economic zone, Modi could eventually claim credit for unlocking new foreign investment and driving higher growth as businesses both at home and abroad reap the benefits of an easier to navigate tax system. “We’ve been in Brexit mode without knowing it!” one of India’s leading businessmen, Anand Mahindra, said ahead of this week’s Parliamentary vote, referring to the complications of trading across state boundaries with different rates of tax. “Without GST, India won’t harness its own ‘common market.’”

His assessment after the measure was approved: “India’s enormous market — a caged tiger — will now be unleashed.” 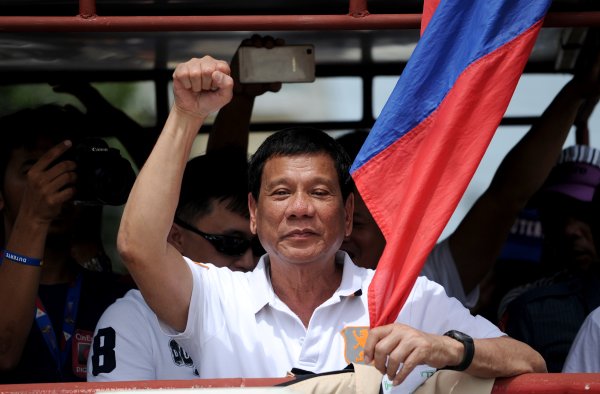 Is Duterte Now Taking On Tycoons?
Next Up: Editor's Pick