A Russian soldier stands guard outside the navy headquarters in Simferopol, Ukraine on March 19, 2014.
Filippo Monteforte—AFP/Getty Images
By Simon Shuster

In early March, just as Russia began its military occupation of Crimea, a strange series of billboards began appearing on bus stops in Moscow. They were military recruitment posters from the Russian Ministry of Defense, and they showed a soldier dressed exactly like the troops who were occupying Crimea – same green uniform, same helmets, same pattern of camouflage, same lack of insignia – standing in front of a landscape that had an odd resemblance to the Crimean coastline. For some passersby it was enough to do a double take. Hadn’t President Vladimir Putin just denied sending any Russian troops to Crimea at all?

Indeed he had. On March 4, the same day those posters were spotted in Moscow, Putin publicly claimed that the Russian troops taking over Crimea were not Russian at all. Even though they drove Russian vehicles with Russian license plates and often admitted to being from Russia, Putin said these were just “local militia,” thus forcing his entire government to play along with this ruse. But that did not stop his Ministry of Defense from using the “local militias” as a recruitment tool.

And two weeks after annexing Crimea, Putin finally made that easier by cutting out the charade. At a ceremony in the Kremlin on Friday, he gathered together a few dozen of his military officers and thanked them for their service “during the recent events in Crimea,” which he called a “serious test” for the Russian military. And so the pretense was dropped, though not without Putin taking on another one in the very next sentence. The Crimea campaign, he said, “demonstrated the substantively new capabilities of our armed forces.”

Did they really? It depends who you ask. For Olga Oliker, who studies the Russian military at the RAND Corporation, a U.S. research center with ties to the Pentagon, the Russian army’s performance in Crimea was in some ways a step up from the norm. “Nobody did anything horribly embarrassing,” she says. “They had these people in unmarked uniforms who were able to walk around and look menacing. But that’s not a very high bar.”

Considering Russia’s recent military track record, it was still high enough for Putin and his Defense Ministry to take a victory lap, an opportunity that hasn’t come along in many years. Its previous campaign, against Georgia in 2008, did not leave much to be proud off. Although it took only five days for Russia’s army to rout their tiny Georgian adversary, that conflict revealed such humiliating flaws in the Russian war machine that even its friendly analysts in Moscow could not hold their tongues.

“It is totally unbelievable that the Russian Air Force was unable to establish air superiority almost to the end of the five-day war, despite the fact that the enemy had no fighter aviation,” the analysts at CAST, a think tank with ties to the Russian Defense Ministry, wrote in its assessment of the Georgian war. “There was no proper interaction between the Russian air and ground forces, and no modern target indication equipment was available.”

By those standards, things went quite well in Crimea. Russia managed to take over the entire peninsula in a couple of days with no casualties on either side. “It was a clean operation, involving a quick deployment on foreign territory, a lot like the western countries do in Afghanistan,” says Maxim Pyadushkin, the editor of CAST’s journal on the Russian military industry. “It was done purely in the Western style, and I think for western countries it was a bit of a surprise to see that Russians can pull this off.”

At least some of the improvements came down to the reforms Russia initiated after the Georgian war. In the past five years, the Defense Ministry has sought to slim down Russia’s bloated officer corps and refine its standing army of nearly one million men into a smaller, more modern and professional force, one that would no longer need to rely on a mandatory draft to fill its ranks. That has not happened. But judging by the troops deployed in Crimea, at least some of the goals have been achieved. The Russian soldiers whose unmarked green uniforms earned them the nickname “little green men” among the locals in Crimea were well equipped and surprisingly disciplined. So the enormous amounts of money Russia has spent on its military in recent years has not all gone to waste.

Last week, the Gaidar Institute, an economic research center in Moscow, estimated that Russia’s military budget, as a proportion of its GDP, will actually exceed that of the U.S. this year. Clocking in at around 2.5 trillion rubles ($70 billion), it will mark a jump of more than 18% compared to what Russia spent on national defense in 2013.

But as a test of its new capabilities, Crimea was just not enough of a war to tell how far the Russian armed forces have come since Georgia. Had they been forced to engage in combat, Oliker of the RAND Corporation says, “They would probably embarrass themselves one way or another, especially when they are trying to use things that are a little bit more technologically advanced.” That may help explain Putin’s decision over the weekend to pull some of his troops back away from the Ukrainian border. However rundown it may be, Ukraine’s army is many times larger than Georgia’s, and it would almost certainly have put up a fight if Russian tanks had come rolling over the border.

Thankfully for everyone involved, that has not happened. The Russian Defense Ministry has passed what its commander in chief apparently considers a “serious test,” and it has even gotten a handy recruitment tool out of the deal. Now if only its posters could convince people that war is always this easy, Russia may finally be able to cancel the draft. 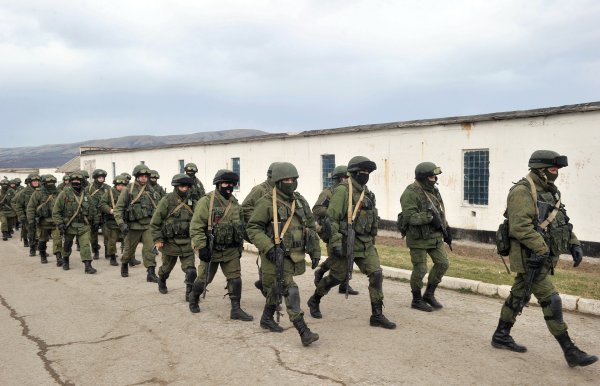