Here's What Donald Trump Has Said About Nuclear Weapons

Donald Trump’s campaign on Wednesday denied a report that said the Republican presidential nominee had repeatedly asked an international foreign policy expert why the U.S. couldn’t use nuclear weapons.

MSNBC’s Joe Scarborough claimed that the expert, who he did not name, advised the real estate mogul earlier this year during an hour-long briefing in which Trump had allegedly asked about using nuclear weapons three times, Scarborough said on Morning Joe.

Trump’s campaign spokeswoman Hope Hicks said in a statement to TIME that there was “no truth” to the report.

Trump has spoken publicly about his thoughts on nuclear weapons in other interviews, saying they should be the “absolute last step” and calling proliferation a serious problem, while also noting he would “never, ever” rule out using them and suggesting that some other countries might need to a develop nuclear arsenal.

Here’s what Trump has said during the five times he has talked about nuclear weapons during the campaign so far:

“We have nuclear arsenals which are in very terrible shape”
In the same New York Times interview in March, Trump indicated that Japan and South Korea might need to obtain their own nuclear arsenal to protect themselves from North Korea and China if the U.S. is unable to defend them. “It’s a position that we have to talk about,” he said. “If the United States keeps on its path, its current path of weakness, they’re going to want to have that anyway with or without me discussing it, because I don’t think they feel very secure in what’s going on with our country.”

“At some point, we cannot be the policeman of the world. And unfortunately, we have a nuclear world now,” he later added. 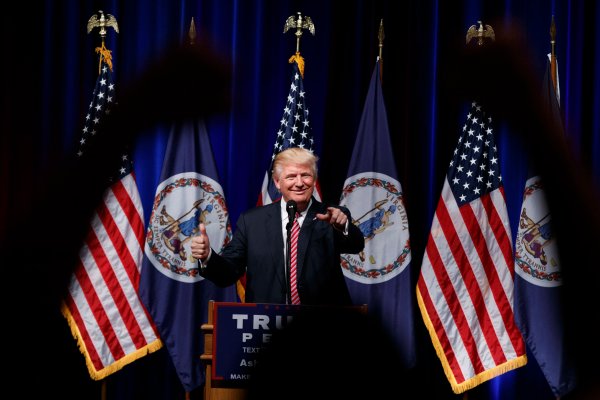 Trump Says He Always Wanted A Purple Heart
Next Up: Editor's Pick