Michael Phelps Will Literally Be Glowing at the Olympics Opening Ceremony

With just one week to go until the Olympic opening ceremony in Rio de Janeiro, Brazil, excitement (and nerves) are ramping up as the torch gets closer to its destination. And Team USA is going big this year. You’d expect nothing less from a team with such powerhouses as Simone Biles and the U.S. Women’s Soccer Team, but in case you needed further proof, we’ve got the first look at the flagbearer’s jacket — and it’s going to light up the night. Literally.

Ralph Lauren (who has been the official outfitters of the U.S. Olympic and Paralympic teams since 2008) has once again created a patriotic ensemble for the athletes, who will be clad in white selvedge denim, a navy blazer and and a striped T-shirt, with accents including grosgrain belts and white cotton bracelets. But the flag bearer, who was just announced to be 22-time Olympic medalist Michael Phelps (currently returning for his fourth Olympics) will stand apart from his teammates with one very high-tech detail: He will be wearing a light-up jacket.

Yes, you read that right: As if the giant American flag waving overhead (and his enormous build) wasn’t enough to distinguish the Phelps from the delegation, you also won’t be able to miss him thanks to electroluminescent panels spelling out USA on the back of the blazer. And you can say “You glow, girl” (or guy) via social media by tagging posts #LiketoLight — for every post with that hashtag, the Polo Ralph Lauren foundation will donate $1 to the United States Olympic Committee.

“For an athlete, being chosen as the flag bearer for Team USA is an extraordinary honor,” David Lauren tells PeopleStyle in a statement. “This jacket will literally light the way for Team USA as they represent our country on a global stage. This revolutionary jacket represents Ralph Lauren’s continued exploration of the intersection of fashion and technology.”

In his own statement, Phelps said, “I’m honored to be chosen, proud to represent the U.S., and humbled by the significance of carrying the flag and all it stands for. For Sydney, I just wanted to make the team. For Athens, I wanted to win gold for my country. For Beijing, I wanted to do something nobody else had done. In London, I wanted to make history. And now, I want to walk in the opening ceremony, take it all in, represent America in the best possible way and make my family proud. This time around, it’s about so much more than medals.” 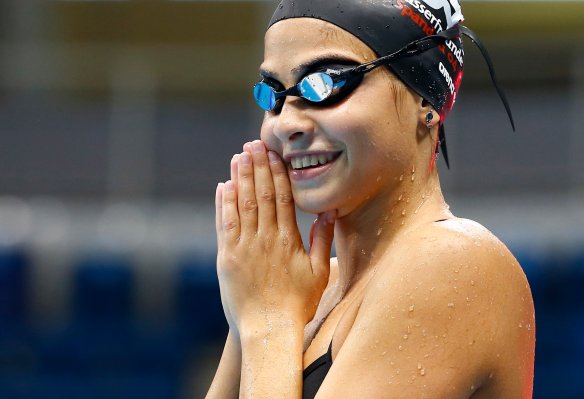