The Real Reason You Can't Vote for an Independent Candidate

Jill Stein announcing she will seek the Green Party's presidential nomination on June 23, 2015. She is now the party's selection.
Drew Angerer—Getty Images
Ideas
By Randy E. Barnett and Lawrence Lessig

Randy E. Barnett directs the Georgetown Center for the Constitution and is the author of Our Republican Constitution: Securing the Liberty and Sovereignty of We the People.

Lawrence Lessig, a professor of law at Harvard, is the author of Republic, Lost: Version 2.0.

Hillary Clinton and Donald Trump are disliked by more voters than any major-party nominees in at least three decades. Independents easily outnumber either Democrats or Republicans. And polls show voters overwhelmingly want another choice.

There is no shortage of great leaders in the United States with integrity, strength and vision, but there is something standing in their way: A morass of state laws meant to keep particular Americans from threatening the two existing major parties. Fundamentally, these laws prevent rivals from emerging that might replace the existing non-responsive parties—the way the Republicans emerged to replace the Whigs over the issue of slavery. And like poll taxes and literacy tests, they unjustifiably block ballot access.

Unlike Democrats or Republicans, independents and third parties have to fight their way onto the ballot in all 50 states. That takes money and boots on the ground. But even with both, an independent candidate will meet immediate trouble from state laws and capricious interpretations by local officials who are themselves typically stalwarts of the ruling duopoly. These officials will challenge the signatures on nomination petitions themselves and even the eligibility of those tasked with collecting them. Consider Ralph Nader’s 2004 presidential campaign. In Pennsylvania, a lawyer for the Democratic Party successfully invalidated the authenticity of over 30,000 of Nader’s signatures—often for ridiculous reasons like someone signing “Bill” instead of “William.”

And early ballot deadlines prevent independent candidates from emerging after it becomes clear that the choices presented by the two major parties are opposed by so many. In Texas, for example, this year’s third-party filing deadline fell before the Democratic and Republican primaries were complete.

Although an independent candidate can try to work around the trouble spots in states with political opposition, such low-level workarounds have not been successful. The next step? Wage a concerted legal battle across the country, arguing that the current process is rigged to protect the two major parties from real competition.

So far, these challenges have not paid off well enough for a viable independent to run for president. But now a nonpartisan group called Better for America is taking up the fight aggressively.

BFA’s organizers believe there is still time for someone with integrity, honor, and trustworthiness to compete against the two major party candidates. The group is currently engaged in signature drives to gain access to the ballot in enough states to account for substantially all 538 votes in the Electoral College. However, in several key states like Illinois (with 20 electoral votes), Texas (30), and North Carolina (15), the deadlines have already passed. So, to get on the ballot in all 50 states, the organization is launching a massive legal challenge to state laws that, they contend, are overly burdensome, byzantine and anachronistic.

The group believes that unduly high signature thresholds, fickle verification procedures and inconsistent deadlines violate the First Amendment right to free association with like-minded people—especially for a federal election. Since state rules often apply only to minor parties and their candidates (for major parties ballot access is automatic), the group contends that these regulations may also violate the Fourteenth Amendment’s equal-protection clause, which guarantees that no state can deny its citizens equal rights under the law.

Particular legal theories aside, we ourselves support the BFA effort because it cuts to the core of the irrationality and arbitrariness of existing ballot-access laws. Reasonable ballot-access requirements to screen out marginal candidates, prevent voter confusion and help ensure that the winner enjoys the support of a majority of the electorate, not merely a plurality, are not objectionable. However, just as poll taxes were set up to keep certain citizens from expressing their right to vote, current ballot-access laws are deliberately designed to provide a similar obstacle to those who might challenge the two prevailing parties.

Indeed, many states purposefully make it impossible for independent candidates to collect the necessary nomination signatures. Florida requires independent campaigns to collect 110,000 signatures by early July. Texas, which has one of the largest voter populations, mandates that independents procure signatures equivalent to 1 percent of turnout in the previous presidential contest.

These laws are effective. No independent has won an electoral vote in 58 years.

Given a chance, both of us would select a very different flavor of dream candidate. One of us would look for a serious protector of the Constitution, someone who will guard our federal system of decentralized power and the integrity of our three branches of government. The other would choose someone who would put our corrupt money-in-politics system on trial first, and focus on fixing our democracy, so all citizens are represented equally. But here is where we agree: reforming the unfair and unjust ballot-access laws is a vital step toward giving Americans a candidate worthy of their vote and, in the future, getting the major party candidates to better represent America’s views.

We hope a great candidate emerges from the Better For America process. We may not like that candidate. In the end, we may each decide to stick with one of the existing candidates or sit this one out. But we admire BFA for taking a stand against laws that, by rigging the ballot-access system for the two existing major parties, are preventing better candidates from emerging this year to provide the American people with a real choice. 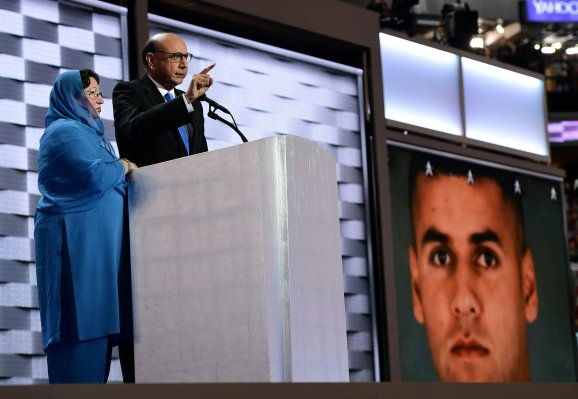 My Muslim Faith Makes Me an American Patriot
Next Up: Editor's Pick