Nadia Murad Basee Taha, a 21-year-old Iraqi woman of the Yezidi minority, speaks to members of the U.N. Security Council at the U.N. headquarters in New York City on Dec. 16, 2015
Eduardo Munoz—Reuters
By Eve Ensler

In April this year, I had the honor of writing a piece on Nadia Murad for the TIME 100 list of the most influential people of the year. Nadia is a member of the ethnic Kurdish minority Yazidi people, one of thousands who was brutally enslaved by ISIS in Iraq, who now bravely travels the world to raise awareness of the genocide.

After writing about her, I reached out to meet Nadia and find ways our movements V-Day and One Billion Rising could be in solidarity with hers, to highlight the efforts of Yazidi women and men to end genocide and sexual terrorism by ISIS.

Today is the two-year anniversary of the Sinjar Massacre in northern Iraq. On that date it is estimated that 10,000 Yazidis were killed or enslaved. In the recent Chilcot inquiry in Britain on the war in Iraq, intelligence reports show that ISIS “was formed during the Iraq war of 2003 as the country and its institutions were dismantled and disenfranchised Iraqis were led to sectarianism.”

This makes the West, particularly the U.S and U.K., accountable for the crimes that have followed. The genocidal war against the Yazidi people continues, despite the courage of activists like Nadia in speaking out for justice. On Wednesday, Nadia and Yazda, a global Yazidi organization, have launched a campaign with One Billion Rising to stop the genocide. I spoke with Nadia recently, to get her thoughts on the anniversary of this horror:

Can you describe what happened at Sinjar two years ago?
The attack was launched around 2 a.m. in the morning on Aug. 3. Within a few hours [ISIS] seized control of Sinjar district, a home to about 350,000 Yazidis. They gave the Yazidis one choice, convert or die. They drove these choices from their interpretation of Shari‘a law, as they see Yazidis as “infidels.” Many men, including some elderly and disabled people who were unable to make the escape to Mount Sinjar, were killed. After killing the men, they took women and children into captivity. For the village of Kocho, my village, we could not make the escape and ISIS reached us in the early hours of the morning. They put the village under siege until Aug. 15. On that day they separated the men and killed them, and they took us, the women and children. I was also, like every other women, girl, or child from Kocho, taken into captivity. There were about 1,100 of us. These attacks happened suddenly and in just a minute we have seen ourselves powerless people within hands of thousands of terrorists when nobody had defended us.

What was your life like before?
I was the youngest girl among my siblings, a simple village girl, who perhaps was luckier than other siblings as I have the chance to go to school. I was a high school student, finished the 11th grade, during the summer I was preparing for the 12th grade, and I was hoping to be a history teacher or to work in a beauty salon as a makeup artist. I had a simple life, never left the village, never even been in a major city, my life was all in the village with friends from school and neighbors.

What became of your friends and family after ISIS attacked?
On Aug. 15, ISIS separated about 700 men and young boys from the families and took them to the outskirts of the village and massacred them. Six of my brothers were killed with the men. We believe they were killed because about 16 men from the village survived the massacres and they later told us that all men were killed. After driving us from Kocho to the Institute of Sinjar near Sinjar city, they took my mother and around 60 other women and killed them too. ISIS was not interested in enslaving them as they were old. We were not sure of their death until this area was recaptured and a mass grave was found. All in all, 18 individuals from my family are missing including my six brothers and my mother, my brothers’ wives, my nephews and nieces.

What happened to you after leaving Sinjar?
I was taken with some 150 girls, ranging in age from about 9 to 28 years old, to Mosul where we were distributed from the distribution centers. In these centers, ISIS militants and others will come and take us and use us for as long they wished, then return us to the center. I was like all other women and girls, raped and tortured.

How did you get out of Iraq?
I managed to escape from them. I was very lucky as many others remain in captivity who could not escape. After escape I lived in the refugee camp for about one year. Then I managed to immigrate to Germany through their program to treat women and girls who managed to escape captivity. Germany is the only country to offer help and support to ISIS survivors by giving them two years’ visa program for treating and hosting them in Germany; 1,100 survivors, including their family members, have benefit from these program, we hope that other countries would do same.

On Dec. 15, 2015, Yazda organization, a global Yazidi organization, helped me to speak before the U.N. Security Council. Here, my message received some attraction from the international community and the media. Since that date, I have been on an international campaign to raise awareness about the Yazidi genocide, the plight of Yazidi women and girls, and speaking against ISIS, a group that continue to threaten the entire world.

Can you say how many women are still held in Iraq?
More than 6,500 women and children were taken into captivity, about 1,200 children boys were taken to be trained to be future jihadists, among them is my nephew Malik. From the total captives about 2,648 have managed to escape, more than 3,500 remain in captivity. Our estimate is that hundreds have committed suicide, or been killed by airstrikes.

Nadia Murad Basee Taha talks to some of the Yazidi women that are living at the refugee camp near Idomeni, Greece, on April 3, 2016
Joseph Galanakis—NurPhoto/Sipa USA/AP

How did the genocide of the Yazidis come about, in your opinion?
The sickening ideology of the radicals always existed and throughout the history radicals have committed crimes using the religion as ground for their crimes. My own community has been subject to more than 74 genocides by radical Muslim groups, not just now but throughout the history such as the Ottomans and others. These radical groups, whenever given the chance, will commit their crimes. What happened in Iraq and Syria was that the world remained silent as ISIS expanded.

ISIS did not come down from the sky, they found the opportunity to grow and the world allowed them to grow. When I was held by them, they had access to weapons, to food, to clothes. Until today, they do not have a shortage of ammunition, weapons or food. ISIS controls an area bigger than the United Kingdom, or many other countries. How do they manage to control these areas if they are not getting help and ammunition or weapons? Who will believe that an international coalition of many countries, together with an Arab coalition with all types of weapons cannot defeat a terrorist group?

Do you feel the West has done enough for the Yazidis?
The West has not done much for my community and myself. The entire world remains silent as Yazidis face a holocaust. They remain silent, well maybe not completely silent, but they do not act on a solution. The Yazidis are on the route towards extinction as a people and there is still no prospect of a solution for those in captivity or for those who have survived.

The world has forgotten Yazidis and other minorities. It seems to me that only a few people actually care about this suffering.

You have been traveling the world to wake people to the genocide. What has been the response to your call?
The response from the normal people has been immense. Anyone I have spoken to has felt sympathy. They all feel my pain and they all say they want to do something. For the governments and officials, I have also visited 17 countries, they show support, but there has been no action. No action on ending ISIS or on ICC case, or even on helping refugees or on allowing special cases to find a safe home. Since two years, the situation for Yazidis is getting worse day by the day as the genocide is ongoing as the last U.N. report stated. Some countries individually have acknowledged the genocide and I am glad they have done so. But there has been no action.

What can people do across the planet to be in solidarity with your struggle?
I would like to take this opportunity to ask people to participate in my social-media campaign on Aug. 3 and tweet #Remember3August or #StopYazidiGenocide

This conversation has been edited and condensed for clarity 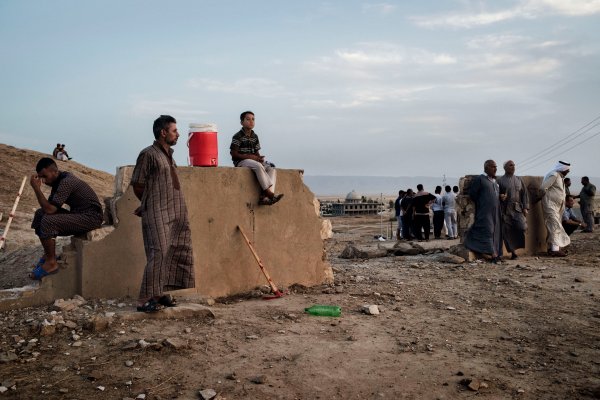 The Iraq Invasion's Legacy Is Still Bloodily Apparent
Next Up: Editor's Pick