It seemed fitting that news broke of Uber selling its China business to its domestic rival, Didi Chuxing, while I was sitting at a Chinese airport awaiting a delayed flight. The plane was grounded for nearly five hours for no discernible reason. Our aircraft was already at the gate. Weather at my port of origin, Shanghai, was fine. It was also fine in Beijing, my destination. But Chinese airports boast the world’s worst on-time records, in part because the military commandeers most of China’s airspace, leaving civilian flights stranded on the tarmac. Last year, almost one-third of flights in China were delayed. It’s one of many drags on efficiency in the world’s second-largest economy — and it remains, like many things in China, largely unexplained.

Around me at Shanghai Hongqiao airport, Western businessmen — they were all men — fretted about upcoming meetings in the Chinese capital and sent news of our delayed flight north. “Are we meeting with Mr. Wang or Mr. Yang?” asked one, of his travel companion. “Actually, I think it’s a Mr. Li,” the colleague responded. Neither seemed quite sure who Mr. Li was but they agreed that the meeting would be short, which would leave plenty of time for sightseeing.

China’s economy is slowing and its labor grows more costly. State protectionism makes it harder for Western firms to compete, as foreign chambers of commerce note in bleak report after bleak report. It’s unnerving that Western tech behemoths — from Google, Twitter and Facebook to now Uber — do not capture the kind of market share in China that they command elsewhere on the globe. “China is brimming over with entrepreneurs and capital,” says Duncan Clark, a business analyst who wrote about the nation’s most successful tech venture of all, in his book Alibaba: The House That Jack Ma Built. “The need to localize the product and navigate a complex regulatory environment means it is often hard [for foreign tech firms] to translate international success to domestic momentum in China.”

Read More: 6 Things to Know About Uber’s Surrender in China

Still, Western businessmen continue to drink tea and gulp baijiu, the fiery local spirit, because who wants to ignore the biggest consumer market on earth? China’s energy is undeniable and its development hyperspeed. More than two decades ago, when I first lived in China, I flew a rattling domestic carrier in the country’s southwest. A half-hearted paint job could not obscure the fact that the plane was a South American discard. I remember a young woman cradling a live chicken next to me. The poultry handled the turbulence better than she did. This time around, when I finally boarded my flight, a brand-new Boeing 787 Dreamliner, I slotted my luggage between a Rimowa and a Tumi. My Chinese seatmates knew how to navigate the plane’s on-screen controls better than I. Far from the one sclerotic state aircraft carrier, Chinese airports now teem with new airlines: there’s Lucky Air, Joy Air and Okay Airways. Practically every major province or big city seems to have its own carrier these days.

It is this pell-mell abundance that so seduces foreigners. Uber’s CEO Travis Kalanick enthused about the nation’s potential. “China is an inspiring country with astonishing opportunity,” he wrote in the Facebook letter announcing UberChina’s sale to Didi. “Many of the world’s mega cities are Chinese, and their thirst for transportation innovation is second to none.” But over the past couple years, Uber bled $1 billion a year trying to get a foothold in the China market. Didi Chuxing, a merger of two of Uber’s Chinese rivals, now controls roughly 85% of the market. Mao Baohua, a transportation expert at Beijing Jiaotong University, predicts the Didi-Uber merger will help ease the notorious traffic in big Chinese cities. But even he cannot comment on the quality of Uber in China. “I have never used Uber,” he admits. “Of course, Chinese companies know the Chinese market better.” Because of backing from China’s top tech players, Didi profited from access to a popular online platform that Uber lacked, not to mention its earlier start on home turf. “Being successful is about listening to your head as much as following your heart,” continued Kalanick in his public letter. “Sustainably serving China’s cities, and the riders and drivers who live in them, is only possible with profitability.”

China’s intense culture of competition doesn’t just foil foreign firms. And for all the proliferation of new brands, it’s often the same handful of companies, each with its own elite connections, which control so much of the nation’s new economy. Most of the new passenger airlines on Chinese tarmacs are linked to one of three state-owned carriers; many are money-losing. So it is for ride-sharing. Didi depends on funding from Alibaba and TenCent, China’s tech giants, but it still hasn’t managed a profit. (Apple is an investor in Didi, too, and investment in Chinese start-ups could be the best way forward for foreign companies.)

Ultimately, the biggest monopoly in China is the ruling Communist Party, which shows little inclination to free the economy from the grip of the state. It’s worth remembering that the nation’s military, which hogs so much of China’s airspace, pledges loyalty not to the nation but to the party. When I finally arrived in Beijing, I walked out to the arrival hall and was greeted by the smell of Starbucks coffee, a foreign success in a land of tea. But a few steps later I stopped in front of a big sign written in Chinese (not English) and decorated with singing figurines. “If there wasn’t a Communist Party,” the poster said, “then there wouldn’t be a new China.” 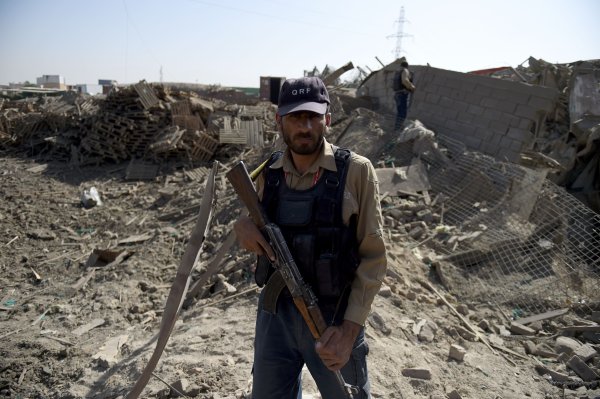 Here's What You Need to Know About Afghanistan's Security Challenge
Next Up: Editor's Pick