The Couple That Changed Gymnastics: 3 Decades of Karolyi Highlights

Coach Bela Karolyi (L) and wife Martha Karolyi show their delight with the performance of their protege Kerri Strug in the US Gymnastics Olympics Trials at the Fleet Center in Boston on June 30, 1996
Doug Pensinger—Getty Images
By Ashley Ross

The 2016 American Women’s Gymnastics Olympic Team has already made history—it’s led by Simone Biles, the most decorated American woman in World Championship history, and it includes Gabby Douglas, the first African American gymnast to win the individual all-around event, which she did at the 2012 London Olympics—and is expected bring home the gold. Again.

The triumph of American gymnastics falls on the shoulders of Bela and Martha Karolyi, the married gymnastics masterminds who will officially step out of the spotlight this year as Martha retires. Bela retired in 1996, though he was lured back into the sport in 1999 as the National Team Coordinator. As of 2015, the two had trained and worked with 28 Olympians (nine of whom were champions), 15 world champions, 12 European champions and six U.S. national champions since training Nadia Comaneci leading up to her perfect 10 in the 1976 Montreal games.

Here’s a look back at some of the highlights of their amazing careers:

1983: The Karolyis begin acquiring their legendary land just north of Houston: a 40-acre ranch that came to be known as the Karolyi Ranch, which has come to be a focal point of gymnastics training. The couple, both born in 1942, had fled to the U.S. from Romania in 1981—after, as Bela told TIME in 2012, the government made it clear they were hoping to use Comaneci’s success story as a way to promote “the power of the communist system”—and learned English by watching Sesame Street before landing a coaching job through the University of Oklahoma and then moving to Texas. The Karolyi Ranch was named the official women’s national team training center in 2000 and a designated U.S. Olympic Training Site in 2011. It was recently announced that USA Gymnastics purchased the ranch to continue using after Martha’s retirement.

1984: Mary Lou Retton, who had trained at the ranch, wins America’s first all-around gold in the 1984 Los Angeles games.

1988: Bela is named head coach of U.S. Olympic Team for the Seoul Games and coaches Phoebe Mills to a bronze medal on the balance beam.

1992: Bela becomes the head coach of the U.S. Olympic team in Barcelona, helping the squad earn its first team medal in eight years.

1996: The Karolyis score what is perhaps their biggest claim to fame, when—with Martha as head Olympic coach—they led the Magnificent Seven to glory. The image of Bela carrying Kerri Strug off the mat after she broke an ankle in the Gold-medal-clinching vault of the games introduces the entire world, not just the gymnastics world, to the Karolyis.

1999: Bela is named National Team Coordinator, a position created solely for him, only nine months before the 2000 Sydney Games. The team placed fourth, and Martha took over the role in 2001.

2004: With Martha leading the team, the U.S. women take silver in the team all-around, missing out on gold by less than 0.7 points. Still, America’s Carly Patterson clinched the individual all-around gold, the first in a series of three as Nastia Liukin went on to win individual all-around gold in 2008 and Douglas followed suit in 2012. Biles is expected to continue the tradition in Rio.

2008: Few legacies are complete without controversy. Dominique Moceanu, a member of the Magnificent Seven who trained with the Karolyis for four years, claims she endured mental abuse at the hands of the coaches. According to the Los Angeles Times, her teammates “said they hadn’t seen the abuse Moceanu said she suffered” and Martha Karolyi responded that she felt “sad” that Moceanu’s positive memories of the Olympics were being overshadowed by “the harder days during the preparation.”

2015: Martha Karolyi announces she will step down from her role. And, though it was Bela whose face made the papers after 1996, it’s Martha who has truly been the constant when it comes to coaching for the women.

“[The Karolyis] have raised the bar on the sport every time they’ve had a chance to do so,” says Steve Penny, President of USA Gymnastics. “This system has been designed to never take success for granted and so hopefully, and our plan, is to make sure that we continue that system and perpetuate that legacy.”

Penny says it’s this diligence that has taught him to work harder when he’s tired of working.

“Martha wants everyone to strive for perfection and she believes that if you strive for it, you may not be perfect, but you have a better chance of achieving greatness,” he says.

Aly Raisman, who left London in 2012 as the most decorated American gymnast, once said that she always knows where Martha is. 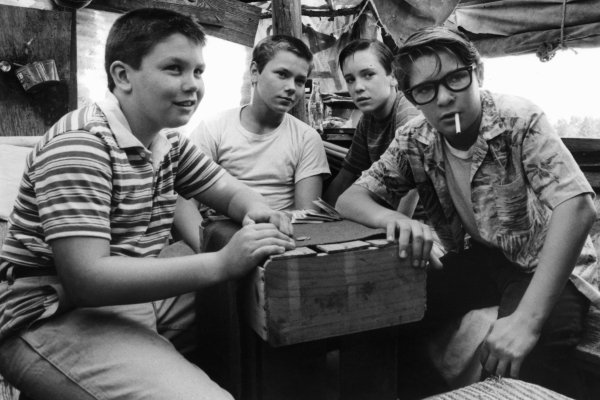 Stand by Me at 30: 'Maybe This Is How Rambo Discovered Puberty'
Next Up: Editor's Pick