Saudi Arabia Just Created a Division for Women in Sports

Saudi Arabia's Sarah Attar competes in the women's 800m heats at the athletics event of the London 2012 Olympic Games on Aug. 8, 2012.
Gabriel Bouys—AFP/Getty Images
Ideas
By Jasmine Bager
Bager is a multimedia journalist who primarily resides in New York City.

In what is already shaping to be a monumental summer for Arab women in sports, Princess Reema bint Bandar Al-Saud has been officially appointed as the Vice President for Women’s Affairs of the General Sports Authority in Saudi Arabia Monday, according to the Saudi Council of Ministers.

Four years ago, two Saudi women athletes, Sarah Attar and Wojdan Shahrkhani, had the feat of competing as the first Saudi women in the history of the games. Prior to that, only Saudi men participated.

This time, Saudi will be better prepared for the women athletes by appointing Princess Reema in this inaugural position. The 41-year-old member of the Saudi royal family has been paving the way for Saudi women for decades.

She was born in Riyadh and spent much of her childhood in the U.S., where her father was the Saudi ambassador for the U.S. for 22 years. She earned a degree in Museum Studies from George Washington University and now resides in the Saudi capital. In addition to being an ambitious businesswoman and one of Fast Company Magazine’s Most Creative People, she breaks records. One of her initiatives, 10KSA, was verified by the Guinness Book of World Records in 2015, when 8,264 women in pink scarfs formed the World’s Largest Humanitarian Ribbon to raise awareness for breast cancer prevention. She is a supporter of empowering Saudi women in the workplace and in the community. Now, she’ll do that in sports, too.

An early leak stated that four Saudi women would be competing this year, potentially doubling the numbers from the 2012 London games. The Saudi Olympic Committee has stated that those names weren’t authorized to be published, and the official statement with the names is expected to be released Tuesday. 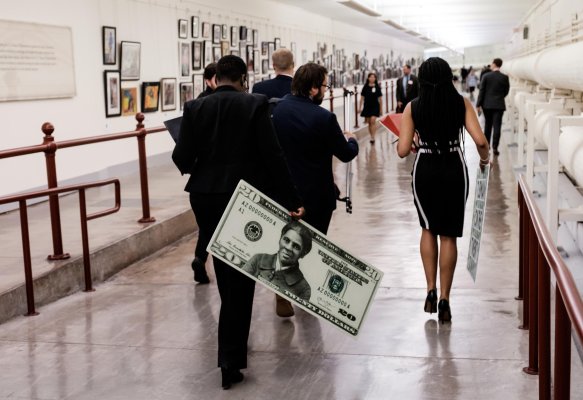 Don't Put Harriet Tubman on the $20 Bill
Next Up: Editor's Pick