Donald Trump: 'The Election's Going to Be Rigged'

Donald Trump previewed a possible excuse for a general election loss Monday, saying he thinks it is going to be “rigged.”

“I’m afraid the election’s going to be rigged, I have to be honest,” Trump said at a rally in Columbus, Ohio Monday afternoon, after talking about Bernie Sanders and the Democratic primary.

The “rigged system” drumbeat is one Trump hit repeatedly during the primary season, first against the Republican establishment and, more recently, about the Democratic Party, to try to win over Sanders supporters who felt their candidate did not have a fair shake against Hillary Clinton. (Sanders backers grew even more concerned after leaked Democratic National Committee emails showed leadership favoring Clinton.) By turning now to say he believes the general election could also be unfairly favorable to Clinton, Trump is laying the groundwork to fuel his supporters’ fury if he loses on Nov. 8.

With less than 100 days until election day, Trump said, “Can you believe we’re almost there?”

Monday’s Ohio appearance was Trump’s first since a feud erupted between him and the Khans, the family of a fallen Muslim soldier. Trump did not reference the controversy in his speech. 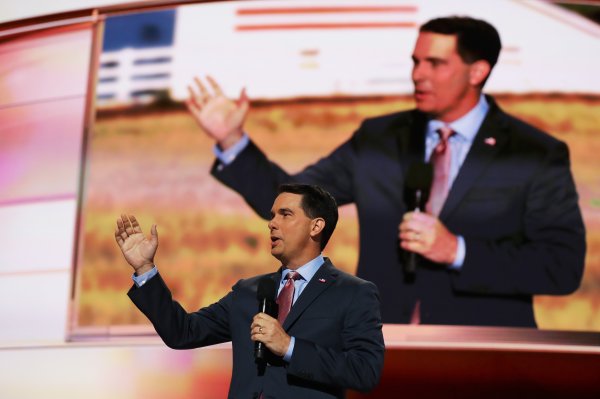