Donald Trump claps his hands together before formally accept the Republican party's nomination at the Republican National Convention on July 21, 2016.
John Moore—Getty Images
Ideas
By Alexander Heffner
Heffner is the host of The Open Mind on PBS.

At the Democratic National Convention, Democrats cited American heroes of both parties and their collective vision—the shining city of Ronald Reagan, the political arena of Theodore Roosevelt and the declared independence of the founders. Hillary Clinton renewed Franklin Roosevelt’s call “The only thing to fear is fear itself” in response to modern-day fascism.

But something was particularly striking about Donald Trump’s RNC acceptance speech: Its staggering deficit of United States history—its failure to acknowledge inspiration from any past U.S. president. Think about that. There is not one U.S. president—Federalist, Whig, Democratic-Republican Party, Democrat, Republican—whom Trump pointed to as an historical model.

So if Trump’s alleged collusion with Russian cyber-terrorists hacking U.S. security is not evidence enough of disloyalty to the United States—nor his supposed bedside reading of Hitler’s speeches, his hateful bullying of “others” or the candidate’s resemblance to an intemperate autocrat who would rule over us—what about Trump’s denial of our democratic history?

From candidates of the establishment to renegade nominees who argued for change, none until Trump failed to embrace American heritage. The founding Republican Abraham Lincoln’s pre-presidency Cooper Union speech is the most nuanced example of a candidate arguing his case through history of our founders.

When a disenchanted Theodore Roosevelt broke away from the Republican Party, he cited Lincoln as inspiration for the Bull Moose progressive platform. And when the Republicans nominated internationalist businessman Wendell Willkie in 1940, the darkest horse since Trump, he embraced Roosevelt: “‘Walk softly and carry a big stick’ was the motto of Theodore Roosevelt. It is still good American doctrine… Under the present administration, the country has been placed in the false position of shouting insults and not even beginning to prepare to take the consequences.”

Even as Barry Goldwater pledged purity in 1964 to the libertarian cause, he promised to further Lincoln’s vision of “preserving and enlarging freedom at home and safeguarding it from the forces of tyranny abroad.” About two decades later, his conservative disciple Ronald Reagan cited the founding of Plymouth Colony, Thomas Paine, the American Revolution and (again) Lincoln as inspirations.

George W. Bush described the presidency as an office of Lincoln’s conscience, of Teddy Roosevelt’s energy, of Harry Truman’s integrity and of Ronald Reagan’s optimism. More recently, John McCain swore to “get back to the basics” of Lincoln, Roosevelt and Reagan, while Mitt Romney invoked John F. Kennedy’s vision for space exploration and the rags-to-riches American dream realized by his own father, George Romney, the former governor of Michigan.

If he cannot acknowledge our history, Trump does not want to make America great again. He wants to make her into something that she’s not. It is nothing short of a willful neglect of our founding creed, an unprecedented dis-ownership of who we are as a people.

Instead he claims, as no previous nominee of any U.S. political party has, “I alone” can fix the country. That is the construct of a third-world demagogue, not an American president. Trump’s patchwork does not appear to fit into our democratic existence.

From this perspective, Trump fails the most basic test of citizenship. Americans are coming to an urgent realization. It is not U.S. exceptionalism that is on the line this election; it may be American extinction, her preservation as a beacon of liberty, and her survival in the book of history.

“Keep an open mind, but not so open that your brains fall out,” said American educator Virginia Gildersleeve. We are an open-minded people but not to the prospect of a homegrown dictator. If Trump does not take stock of American history, it is our very open minds and free expression that could hang in the balance. 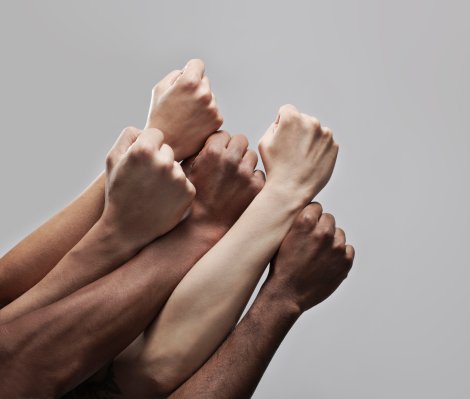 3 Steps to Combat Racism in America
Next Up: Editor's Pick