Intelligence Briefings for Presidential Candidates Caused Trouble From the Start

When Hillary Clinton and Donald Trump faced off at forum on national-security issues in New York City on Wednesday night, host Matt Lauer pressed the Republican presidential nominee on the contents of two classified national security briefings he had received so far.

Asked whether he had learned anything from the briefings, Trump said that “President Obama and Hillary Clinton and John Kerry, who is another total disaster, did exactly the opposite” of what the experts recommended. Following those comments, Clinton called it “totally inappropriate and undisciplined” for Trump to have commented in such a manner on the classified meetings.

This not the first time an intelligence briefing has caused an uproar during the 2016 campaign—in July, Senate Minority Leader Harry Reid suggested that Trump ought to get “fake” briefings—but such controversies are a deep part of the history of those briefings.

The custom dates back to the 1952 election and it wasn’t meant to become such a political hot potato. As TIME recently reported, when President Harry S. Truman proposed inviting the nominees — former Illinois Gov. Adlai Stevenson and former commander of the Allied Forces Gen. Dwight D. Eisenhower — to lunch at the White House with the Cabinet and a briefing by intelligence officials, he was just trying to make sure the next commander-in-chief wouldn’t come to office as clueless as he had been when President Franklin D. Roosevelt died on April 12, 1945. He told reporters that catching up on the Manhattan Project and the development of the atomic bomb “felt like the moon, the stars, and all the planets had fallen on me.”

As TIME reported in Aug. 25, 1952, Democratic nominee Stevenson’s first briefing consisted of a 20-minute rundown on the Korean War with C.I.A. Director General Walter Bedell Smith and General of the Army Omar Bradley, chairman of the Joint Chiefs of Staff. But TIME also reported that Stevenson received campaign advice from Truman. Because Stevenson got the first meeting, Eisenhower claimed that looked like the President was trying to influence the election. He said so in public and in a letter to Smith, who happened to be his former chief of staff. According to the TIME article, Bradley attempted to take the hit, arguing “since Ike was so well informed on the international situation, neither Bradley nor Defense Secretary Lovett had seen any need to make immediate arrangements with Eisenhower” and apologized, claiming “it never occurred to me that the timing of notification might become an issue.”

But once invited, Eisenhower declined, writing to the President that he did not feel it would be appropriate to attend:

An offended Truman wrote the general in a letter dated Aug. 16, 1952, “Partisan politics should stop at the boundaries of the United States. I am extremely sorry that you have allowed a bunch of screwballs to come between us.” (Some scholars say tensions between the once friendly Eisenhower and Truman during the 1952 campaign at one point had to do with Truman being appalled that Eisenhower didn’t properly defend, on the campaign trail, his own mentor former Secretary of State George Marshall — whom Truman admired as well — against “attacks by Senator Joseph McCarthy”.)

Eisenhower eventually did accept the offer of weekly CIA reports, according to John L. Helgerson‘s Getting To Know the President: CIA Briefings of Presidential Candidates 1952-1992. Each candidate got at least few briefings before Election Day in November — Eisenhower even received one at a rodeo in Denver — but it may not have made much of a difference.

In his memoirs, the election’s victor Eisenhower described the briefings as very “general” and adding “little to my knowledge.” 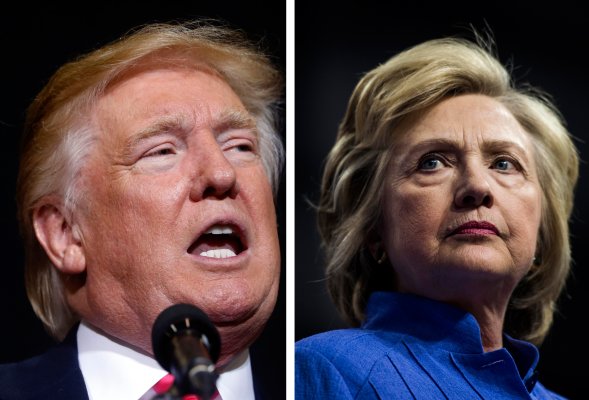 Debate Advice for Donald Trump and Hillary Clinton
Next Up: Editor's Pick