Harry Potter and the Cursed Child, the new script-book by Jack Thorne, based on a story by himself, J.K. Rowling and John Tiffany, obviously differs from the original book series in that it is a play. This means a lot of things—less time for character development, a different sense of time passing, less description—which amount to a narrative that has less opportunity for the kind of rule-explaining and backstory-unpacking that Rowling mastered in the books. So at the end of the eighth story about the boy who lived, we have a few unresolved questions:

1. Who is the cursed child?

In the seven original Harry Potter books, the title formula includes a person (“the prisoner of Azkaban”) or thing (“the Deathly Hallows”) that is murky or unknown to Harry at the beginning of the plot and revealed by the end. But by the end of the script-book, it’s not entirely clear who the cursed child is. The main options seem to be Delphi, cursed by her parentage, or Albus, cursed by his—but some fans have suggested that it could also be Scorpius, cursed either by the rumor of his parentage, or by the curse that eventually killed his mother, Astoria. Or might it be Cedric Diggory, the boy whose death by the killing curse spurs the plot of the whole play? Or could it be Harry Potter himself, cursed as a father by his own unhappy childhood? We may have to wait for a J.K. Rowling tweet to find out.

2. When did Bellatrix Lestrange give birth to Delphi?

According to the stage directions, Delphi is a “twenty-something” when she first appears to Albus—twenty-two years after the Battle of Hogwarts. Since Bellatrix died in that battle, she has to have given birth earlier. One Redditor has speculated that Bellatrix probably gave birth sometime during Harry Potter and the Half-Blood Prince, pointing out that she wasn’t present when Snape killed Dumbledore. Earlier in that book, she also said something strange to the Malfoys as Draco prepares for his assignment: “If I had sons, I would be glad to give them up to the service of the Dark Lord!” Why would she say “sons” instead of “a son”? Perhaps because she’s pregnant and thinking about her future children. Additionally, the Redditor points out, her pregnancy could be “why Voldemort insists on Bellatrix getting rid of Nymphadora and keeping her family tree pruned.”

3. But how could Voldemort have a baby?

Was the Dark Lord human enough to conceive a child? We know he was incapable of love, though not necessarily sex, as Rowling hinted in a 2014 tweet:

But could there have been some other form of magical conception that would have allowed him to avoid the very human old-fashioned way? Again, waiting for a Rowling tweet on this one.

4. What’s going on with the Parseltongue and the burning scar?

In Cursed Child, Harry feels his scar burning for the first time in two decades and finds that he can once again speak and understand Parseltongue. We know from the end of Deathly Hallows that his scar didn’t burn after Voldemort’s death, and it could be assumed that he would lose the ability to understand Parseltongue now that Voldemort was no longer a part of him, after he destroyed himself as a Horcrux—a fact Harry confirms in the play when he says, “How do I…? I haven’t been able to understand Parseltongue since Voldemort died.” So why can he understand it now, if he’s no longer a Horcrux? The best explanation might be that the alternate realities created by Albus’s time travel mean that there are parallel universes where he does not destroy himself as a Horcrux, and therefore still has the skill.

5. Where did Delphi’s prophecy come from?

Delphi’s interference with Albus, and in effect the entire action of the play, stems from a prophecy: “When spares are spared, when time is turned, when unseen children murder their fathers: Then will the Dark Lord return.” She says Bellatrix’s husband Rodolphus Lestrange “revealed” it to her when he left Azkaban, but does that mean he prophesied it himself, or is simply repeating it from someone else? And why is he seemingly OK with his wife bearing Voldemort’s child?

6. What is Delphi’s last name?

Clearly “Diggory” was a front, so is she a Lestrange? A Voldemort? A Riddle?

MORE The Magic Is Gone but Harry Potter Will Never Die

7. What’s the deal with Augureys?

Delphi has an Augurey tattooed on the back of her neck, and in the alternate reality where she helps Voldemort re-ascend to power, she’s his right-hand woman, dubbed The Augurey. So what are Augureys? As she explains, “They’re sinister-looking black birds that cry when rain’s coming. Wizards used to believe that the Augurey’s cry foretold death.” The Augurey (also known as the Irish Phoenix) is also described in the book Fantastic Beasts and Where to Find Them as “a native of Britain and Ireland, though sometimes found elsewhere in northern Europe. A thin and mournful-looking bird, somewhat like a small and underfed vulture in appearance, the Augurey is greenish black. It is intensely shy, nests in bramble and thorn, eats large insects and fairies, flies only in heavy rain and otherwise remains hidden in its tear-shaped nest.” Does this mean there could be an Augurey tie-in in the upcoming Fantastic Beasts movie? We’ll have to wait until November to find out.

8. Could there be more Time-Turners (and thus more Harry Potter stories)?

As the very existence of this script-book has proven, anything is possible. But at a book-release party on Saturday night in London, Rowling said there would be no more Harry stories. “He goes on a very big journey during these two plays and then, yeah, I think we’re done. This is the next generation, you know … So, I’m thrilled to see it realized so beautifully but, no, Harry is done now.”

But that doesn’t mean we might not get other stories from the Wizarding World—after all, the November release of the film Fantastic Beasts and Where to Find Them could bring new stories of other witches and wizards throughout history. 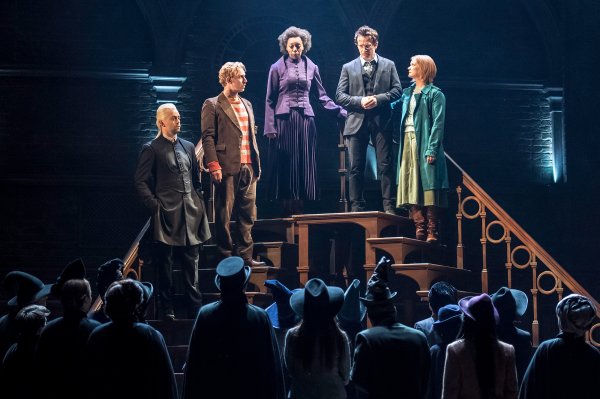 The Trouble With Time Travel in the Harry Potter Universe
Next Up: Editor's Pick