Police cordoning off Leytonstone Underground Station in east London on May 12, 2015. Muhaydin Mire, 30, of Sansom Road, Leytonstone, has been found guilty of trying to behead a random stranger at a Tube station after being inspired by the murder of Fusilier Lee Rigby.
Jonathan Brady—PA Wire
By Kate Samuelson

A man who attempted to behead a passenger in an ISIS-inspired attack at a London Underground station last December has been jailed for life.

Muhaydin Mire, 30, targeted random individuals during the knife attack at Leytonstone station in East London. He stabbed three people including musician Lyle Zimmerman, 56, who was left with serious but not life-threatening injuries after his throat was cut in the ticket hall.

Judge Nicholas Hilliard, who sentenced Mire to a minimum of eight-and-a-half years before being considered for parole, accepted that he had been suffering from paranoid schizophrenia at the time but also believed he had been motivated by events in Syria, the BBC reports. Judge Hilliard added that Mire cut the throat of an innocent member of the public “in plain sight for maximum impact”.

Mobile phone footage of the Dec. 5 attack showed Mire saying he would “spill blood” for his “Syrian brothers.” A bystander can be heard in the background responding, “you ain’t no Muslim, bruv.” The footage went viral and inspired a hashtag #YouAintNoMuslimBruv, which people on social media used to tweet solidarity for the victims. 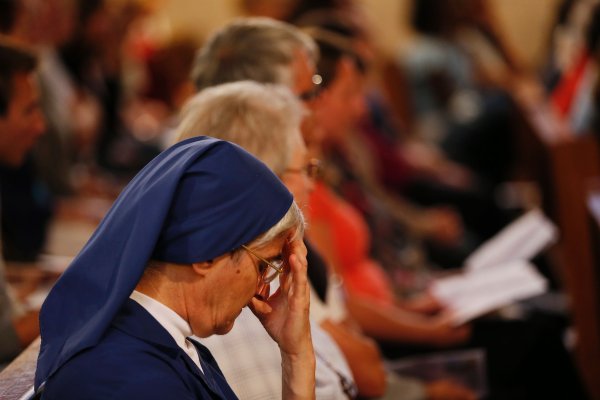 Two Arrested in France Over Murder of Priest
Next Up: Editor's Pick