When Khizr and Ghazala Khan, the parents of fallen U.S. Army Captain Humayun Khan, took the stage last week at the Democratic National Convention, they started a national conversation that has drawn attention to the role of Muslims in the U.S. military.

However, while Muslim-Americans have been a part of the national fabric for centuries, that conversation has tended to focus on those who served and fought in the last few decades. Perhaps that’s because the early history of Muslims in the U.S. military was, for a long time, particularly murky.

Though some sources identify Muslim men who fought for America as early as the Revolutionary War, the evidence there is usually based on guesswork. Though men like Bampett Muhamed, a corporal who served in Virginia beginning in 1775, are often seen as the nation’s earliest Muslim soldiers, little is known about them beyond the fact that their names sound Muslim. As Edward E. Curtis’ Encyclopedia of Muslim-American History points out, such a name is no guarantee of the person’s religious background or identity.

And yet, even into the 20th century, there are few other tools available for historians to identify a soldier or sailor’s religion.

One reason for that lack of data is simple. Even into the 1950s, while a service member’s dog tag typically included religious information, so that they might receive the correct religious burials if needed, the only options available were Christian or Jewish. Those faiths could be indicated with a letter: C for Catholic, P for Protestant, H for Hebrew. The U.S. military did not recognize Islam as a possible religion for a service member.

The man who led the charge to change this situation was Abdullah (sometimes spelled Abdallah) Igram, a World War II veteran and community leader from Cedar Rapids, Iowa. Igram’s story, as passed down to his children, was that he had specifically requested that his dog tag indicate that he was Muslim, and that he had been told that was not possible.

As TIME reported in 1953, Igram returned from his service determined to help their fellow Americans learn more about the Islamic faith—and to address the dog tag problem:

That year, he had written to the Secretary of the Army and had received the O.K. for Muslim soldiers to wear that additional religious-identification tag. “I am fighting for my right, and the right of my people, to be recognized as a religious faith,” he told the Toledo Blade. In that early-1950s period, the military also allowed service members to choose X (other) or Y (preferring not to say) on their tags. Igram further wrote to President Eisenhower (who would also be the first man to make a presidential visit to a mosque) requesting that the military formally recognize Islam and allow service members to print I or M on their official dog tags.

His widow told the Daily Iowan in 2007 that the specific request was not granted—but by the time the Vietnam War began, those one-letter indications had been phased out in favor of spelling out the entire name of a religious affiliation, with a wide range to choose from. Today, those who serve in the U.S. military can “generally put whatever religious preference they want on their tags,” according to the Army.

Dog tags aren’t the only area in which Muslim military service has achieved recognition over the last half-century. For example, after World War I, when religious symbolism was first added to the military gravestones approved by the War Department, a cross and a Star of David were the only options available. Today, a wide range of symbols are available, including two options to indicate Islamic faith. And as recently as 1990, an Army spokesman told the Toledo Blade that there were no Muslim chaplains in the U.S. armed forces. The New York Times reports this week that there are currently five.

Guessing based on names is no longer necessary when it comes to Muslims in the U.S. military: the military keeps track of the religions that service members choose to report. In 2015, the Pentagon reported that 5,896 people serving at the time self-identified as Muslim. 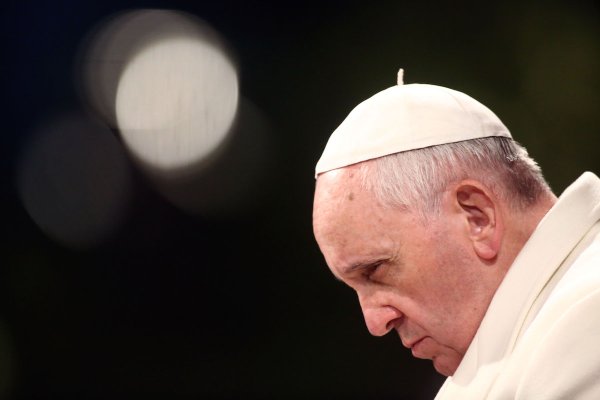 The History That Makes Pope Francis' Auschwitz Visit Even More Meaningful
Next Up: Editor's Pick