What Happened When Hitler Hosted the Olympics 80 Years Ago

The Summer Olympic Games serve as a grand podium for the belief that a nation’s best athletes can bolster its sense of pride and honor for another four years—setting the stage for real-world superheroes who defy the odds and challenge the capabilities of the human body. It’s a tradition the globe is unlikely to kick.

But 80 years ago, when the Summer Olympics opened on Aug. 1, 1936, in Berlin, that creed nearly crumbled. That year, it became increasingly clear that Germany only wanted to see its superheroes in one light: the stars of the Aryan race, superior for their genetic makeup rather than their athleticism, says Barbara Burstin, history lecturer at the University of Pittsburgh and Carnegie Mellon University.

“It provided Hitler with a showcase,” Burstin says. “It was a propaganda bonanza for him.”

Adolf Hilter, who had effectively become Germany’s dictator in 1933, had instituted an “Aryans-only” policy throughout all German athletic organizations, sparking global outrage, especially among American athletes. Only one German-Jewish athlete was permitted to play in the games—fencer Helene Mayer—because only her father was Jewish. Even her position wasn’t guaranteed; TIME reported in 1935 that Charles Hitchcock Sherrill, a U.S. member of the International Olympic Committee, had traveled to Germany prior to the Olympics to ensure Mayer would receive her rightful spot on the team.

Some athletes and Olympics organizers in the United States and Europe considered pulling out of the Olympics altogether to compete elsewhere. The debate on whether to pull out on the American end was particularly heated, as the boycott began with the U.S. team. Avery Brundage, then the president of the American Olympic Committee, opposed a boycott, arguing that “the Olympic Games belong to the athletes and not to the politicians.”

Some academics, including Burstin, now believe that Brundage was complicit in the Nazi’s anti-Semitism in the Olympics, and that he even attempted to paint American Jews as unpatriotic and misguided for supporting a boycott. Meanwhile, the Nazis, seeing the negative reaction to what was supposed to be a great moment for Germany, temporarily took down anti-Jewish propaganda and did what they could to clean up Germany’s image prior to the games. In the end, the U.S. would send several Jewish athletes to the games, and many journalists covered the games with a degree of positivity, with TIME reporting in 1936 that most newspapers focused on “the ceremonious procession” of the Olympics’ first modern Torch Relay rather than “other doings in Berlin.”

Though Hitler’s attempt to see Aryan athletes triumph was not a complete success—most famously due to the medal sweep brought by U.S. track star Jesse Owens—German athletes did walk away with the most Olympic medals. Some thought the games showed Germany had successfully crawled out of the economic ditch it had fallen into post-WWI, and had ultimately acted as a great host.

And so those Olympics would have repercussions that went far beyond the world of sports.

“It kind of dulled the opposition to [Hitler] that clearly had been quite evident up to 1936,” Burstin says. “A lot of people felt he was clearly heading in the wrong direction, and by going to the Olympics we gave him the opportunity to appear sane, rational and tolerant.”

Behind the scenes, however, the Olympics presented hardly a pause in the terrible progress of Nazism.

As Jesse Owens was running to victory, two Jewish runners for the U.S. team, Marty Glickman and Sam Stoller, had been pulled by their coach from the 4×100 meter relay the day before the event, in what was believed by Glickman to be an attempt to not embarrass Germany. And after the games, William E. Dodd, then the U.S. ambassador to Germany, said Jews awaited the restoration of anti-Semitic Nazi actions “with fear and trembling,” according to the U.S. Holocaust Memorial Museum. The head of the Olympic village, Captain Wolfgang Furstner, killed himself two days after the games upon his dismissal from military service due to his Jewish ancestry.

Many Jewish athletes who either competed in the Olympics prior to 1936 or the 1936 Olympics itself would die in concentration camps during the Holocaust. Among them were Ilja Szraibman, a Polish swimmer and Roman Kantor, a Polish fencer, both of whom competed in 1936 and later died in Majdanek. Notably, Alfred Nakache, a French swimmer who competed in the 1936 games, would also compete in the 1948 Olympic Games in London after surviving Auschwitz.

Several aspects of the 1936 games still exist today, says David Clay Large, author of Nazi Games: The Olympics of 1936. The Berlin Olympics were the first to host the torch relay and the first to be broadcast on television—and some of its deeper-seated elements have continued as well.

“Those games really set the stage for the Olympics as we know them today,” Large says. “That injection of politics and extreme nationalism, that’s continued. There’s no question that nationalism is a very fundamental part of it all.” 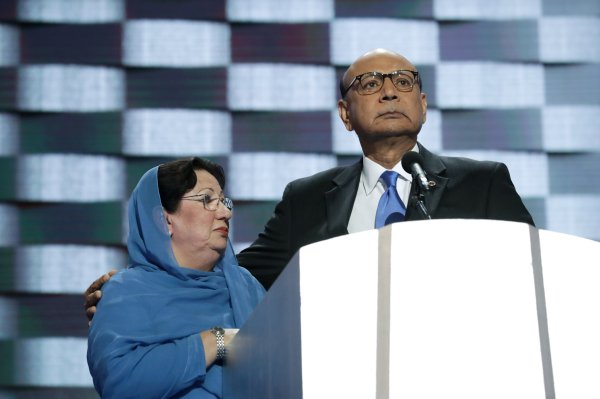 Khizr Khan and a Brief History of the American Gold Star Family
Next Up: Editor's Pick