As their donor retreat wrapped up at the grand Broadmoor resort, a group backed by billionaire brothers Charles and David Koch previewed to invited reporters another almost $4 million in ads against Democratic Senate hopefuls.

The ads, which are set to start this week in Nevada, Ohio and Pennsylvania, bring Freedom Partners Action Fund media spending on Senate races to $24 million. That number is expected to hit $42 million by Election Day in November. In all, the Koch network plans to spend $250 million on politics this cycle.

With Charles Koch disgusted by his options running for President, the network of conservative and libertarian organizations that are part of the Freedom Partners network is working to keep the Senate in Republican hands. Donors at this Colorado Springs, Colo., resort were largely supportive of that decision, even though most said they would vote against Democratic nominee Hillary Clinton rather than vote for GOP choice Donald Trump.

The new ads all reinforce voters’ beliefs that the system is rigged, and those in power are trying to get ahead through government gigs. The ads do not mention that they are, in effect, trying to keep two endangered incumbents in power.

In the Nevada ad, a narrator tells voters that Democrat Catherine Cortez Masto fought shared-ride service Uber from Nevada and took money from the pockets of amateur drivers, all the while accepting gifts from special interest groups. “In Washington,” the female narrator asks, “would she work for us or them?”

It’s a similar message about insiders in Ohio, where former Governor Ted Strickland is trying to unseat Republican Sen. Rob Portman. “When times were tough, Ted Strickland made our lives harder,” the narrator says. The ad cites Strickland’s decision to tap into the state’s rainy day fund to weather the 2008 economic crisis and its aftermath, as well as fee hikes on trash and cars. “As governor, Strickland was a disappointment. Why would we make him our Senator?”

And in next-door Pennsylvania, the group is running ads against Katie McGinty, who is challenging Republican Sen. Pat Toomey. “Katie McGinty helped steer millions of our tax dollars to favored companies. She helped them navigate government and land big contracts,” the female narrator says. In exchange, the ad claims, McGinty got a “board positions, a six-figure salary and campaign cash.” The ad ends with the question: “Will she look out for you, or the favored few?”

As a package, it’s clear the Koch allies are working to cast these candidates as nefarious and untrustworthy. In addition to these three states, the Koch network is eyeing Senate races in Wisconsin, Florida and Indiana.

The Koch retreats have in the past been closed to reporters, but a handful were invited to attend the three-day summit in the Rocky Mountains. In exchange, reporters agreed not to identify donors who did not want to be identified. 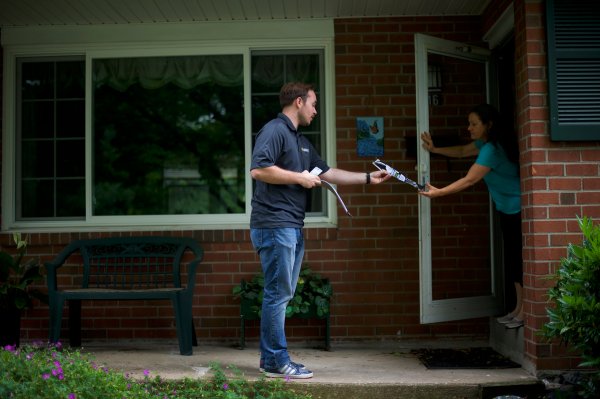 Meet the Koch Brothers' Data Guru
Next Up: Editor's Pick